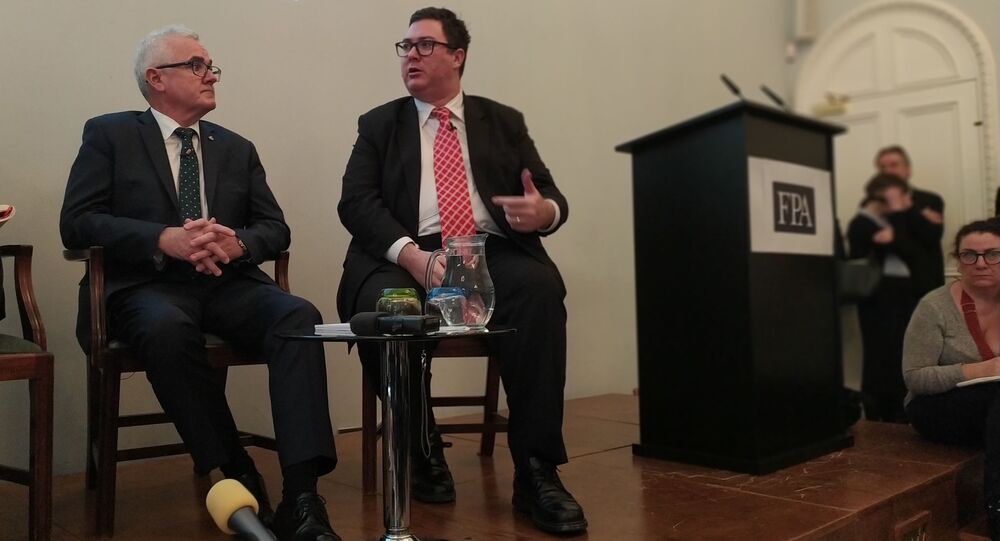 Two Australian MPs have slammed the imprisonment of the prominent Australian journalist in a key visit to the UK amid two crucial hearing in late February in Woolwich, where the Wikileaks founder could face extradition to the US and up to 175 years in prison for publishing leaked information on war crimes in Iraq and Afghanistan.

Australian independent MP Andrew Wilkie and National Party’s George Christensen said at a Foreign Press Association meeting on Tuesday that the continued detention and prosecution of Wikileaks founder Julian Assange was an “affront” to democracy, as well as freedom of the press and speech.

The visiting MPs arrived in the UK on Sunday to speak at the conference, where Wikileaks editor-in-chief Kristinn Hrafnsson and Jennifer Robinson, lawyer for Assange’s legal team, gave a presser for attendees.

MP Wilkie, a former military officer who resigned from his post as an intelligence analyst over Australia’s role in the invasion of Iraq in 2003, said that there was a “broad range of views” amongst officials about the detained journalist.

Numerous “allegations, innuendos, stories and disinformation”, had been spread over many years by the media and various officials, he added.

“Please remember the US extradition is based on a very specific snap shot in time and on very narrow matters”, Wilkie told the audience.

The WikiLeaks revelations from 2010 to 2011 disclosed information about the wars in Iraq and Afghanistan, as well as “circumstances in Guantanamo Bay”, Mr Wilkie said.

He added: “So if we are to treat Assange fairly and justly, we have to look at the merits or otherwise of the US complaint. It is simply about those matters, when you boil it down to its very essence."

Wikileaks was simply “releasing information about those matters in the public interest […] as a journalist”, the Independent Australian MP told the press, adding that his detention at Belmarsh prison and potential extradition to the US revealed the “sharp contrast what the injustice is”.

Adding to comments from Mr Wilkie, Mr Christensen discussed the “two myths” that “need to be busted” regarding Assange, namely that the publisher was “not a journalist”.

Mr Christensen told the audience: "I think he is. Australians think he is. He’s won an award. But it doesn’t really matter whether he’s a blogger, a journalist, or a publisher. The issue is free speech and the right to publish".

He added that the belief that Mr Assange was a “hacker” stealing information from the US government was false, as the journalist had been approached by US military private and whistleblower Chelsea Manning to publish the classified information.

Despite being a fan of US president Donald Trump and UK prime minister Boris Johnson, he was a “bigger fan of free speech and a free press” Mr Christensen said.

Christensen, 41, who was a journalist prior to becoming an MP, said that “fundamentals” for democracy and conservatism such as free speech, freedom of the press, and national sovereignty, were threatened by the detention and prosecution of the Wikileaks founder.

Mr Christensen called Assange “our boy” and “an Ozzy”, adding that it was wrong to allow the UK government to extradite an Australian citizen to the United States.

© REUTERS / HENRY NICHOLLS
Exclusive: ‘The Greater the Insults to Julian the Stronger I Become’, Assange’s Father Tells Sputnik
Mr Christensen concluded, stating he “firmly believed” that the Australian government should revise its extradition treaty with Washington, adding that an extradition treaty with “any country” must protect “freedom of speech and press freedom”.

The international visit comes as Julian Assange remains at Belmarsh prison while awaiting crucial extradition hearings which have been split into two parts. The first set of hearings begin on 24 February and the second set on 20 April. Assange could be extradited to the US where authorities have charged him under the 1917 Espionage Act. He faces up to 175 years in prison for his role in publishing classified documents in 2010 and 2011 revealing war crimes by US occupation forces. According to barrister Jennifer Robinson, the case could last years should the US government or defence launch appeals after the judge's decision.