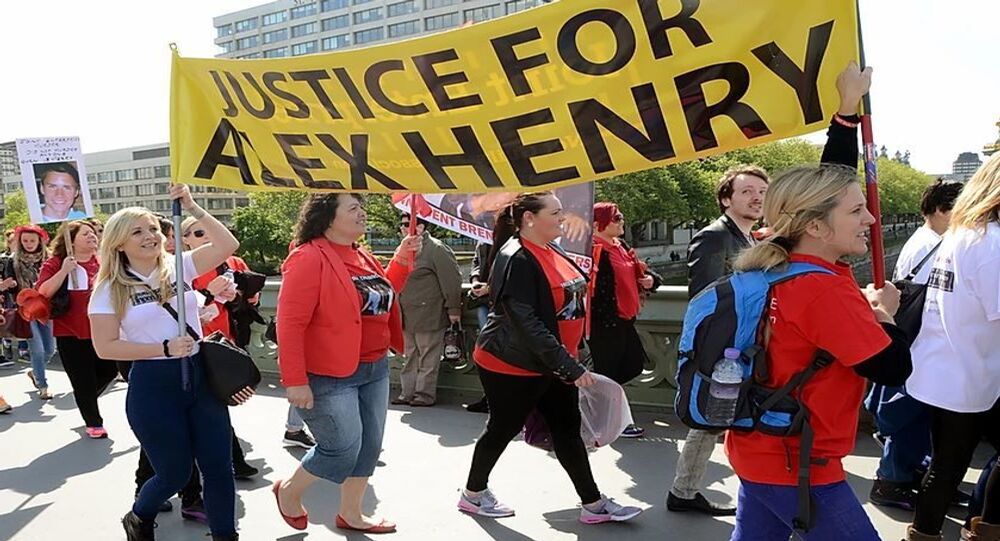 In August 2013 Taqui Khezihi, 20, was fatally wounded with a knife during a 47-second fight in west London. Alex Henry was jailed for life for his murder even though he did not stab him and his sister has been fighting for “justice” ever since.

A trainee lawyer whose brother is serving life in prison for murder has launched a campaign to amend the law.

Charlotte Henry, 30, whose younger brother Alex is in prison serving life for murder, said he was one of thousands of people in UK jails who were in jail on the basis of “unsafe” convictions.

Thank you to everyone that came to the #JointEnterpriseBill conference yesterday at the House of Commons. Special thanks goes to our amazing JEB Ambassadors! Law students from across London campaigning alongside @JENGbA #HelpJEB #JEB pic.twitter.com/BEaDiR3SUG

​She said: “You are potentially looking at thousands of people having an appeal and being either retried if their conviction is unsafe, or having it substituted with manslaughter.”

Convicted murderers are given a mandatory life sentence in the UK while those found guilty of manslaughter - where there is no intent - tend to get much lighter sentences.

Every year hundreds of people are sent to prison for murder on the grounds of “joint enterprise” - a 300-year-old English legal principle which says an accomplice can be convicted if they are thought to have had “foreknowledge” of a crime.

Alex was 20 when he and his friends went shopping in Ealing, west London, on a hot summer’s day in August 2013.

At one point one of Alex’s friends exchanged a “dirty look” with a group of four men - complete strangers - and a fight broke out in broad daylight.

His friend, Cameron Ferguson, 19, stabbed two of the strangers with a knife hidden inside a sports bag but Alex was unaware of the weapon’s existence until he was arrested by the police hours later.

What about innocent prisoners with autism. @JENGbA has quite a few that we know of. https://t.co/zKfDOpIPCY

At his trial the prosecution claimed Alex must have known Ferguson had the knife in advance.

A BILL FOR HER BROTHER I thought it was game over when my son Alex Henry's appeal failed.Lady Hallet & Lord Thomas allowed the CPS to argue that I used my PhD to 'coach' my son to be autistic.But @CharlMHenry said 'don't worry mum, I have a plan' & yesterday she launched her Bill pic.twitter.com/31cPBBKBvD

​Charlotte said that while being cross examined in court her brother admitted he and his friends “told each other everything” and this was used by the prosecution to convince the jury he had “foreknowledge” of the knife and that Ferguson might use it.

Alex and another man, Janhelle Murray-Grant, 19, were jailed for life with a minimum tariff of 19 years.

Charlotte said that since being imprisoned her brother had been diagnosed with autism, which she said would have made a big difference to the outcome of his trial.

“Autistic people find it difficult to read the intentions of others and can’t predict their behaviours so Alex’s autism would have been highly relevant because he was expected to have foreseen that his friend would stab someone,” she said.

I believe deportation of the most horrendous criminal's Rape, murder has some sense. Deporting people for minor drug charges, those convicted under Joint Enterprise(now unlawful) or after having served time and reassimilated into society is an atrocity and national shame. https://t.co/dIY4bfnHlo

But Alex was refused a fresh trial because the appeal judges felt he did not pass the “substantial injustice” test.

Charlotte has now drafted legislation which would remove the “substantial injustice” test from a case where an appellant has new evidence.

She has got cross-party support from a group of 20 MPs, including Andrew Mitchell, a Conservative former minister and Chief Whip, and her local MP, Labour’s Ruth Cadbury.

But Charlotte said she was wary of trying to get the legal amendment passed by MPs, who might worry about being seen by voters to be “soft on crime”, and had chosen instead to try and get it pushed by the House of Lords.

Crilly, armed only with a fire extinguisher, tackled jihadist terrorist Usman Khan after he stabbed two people at an offender rehabilitation conference at the Fishmongers’ Hall in central London in November.

This is a hero to me. John crilly. Yet he’s had no thanks #hero #saythankyoutohimboris pic.twitter.com/jy8WPWHzKs

​Crilly had originally been found guilty of murder but his conviction was substituted with one of manslaughter after he passed the substantial injustice test - the only person to have done so.

In 2016 the joint enterprise law was reformed when the UK Supreme Court ruled that the prosecution must prove that a secondary offender - someone who did not strike a fatal blow - not only "foresaw" the possibility that a person might be killed but intentionally assisted or encouraged the crime.

But the change in the law was not retrospective and said people who wanted to appeal had to pass the substantial injustice test, which required them to prove they would not have been convicted had the law been correctly applied.

Charlotte's amendment to the law would abolishing the "substantial injustice" test.

On 25 March Charlotte hopes hundreds of law students will join her on a march to Parliament where they will highlight the plight of those like her brother who she believes were unfairly convicted.

She said she did not expect her amendment to be tabled until March 2021 at the earliest but she is determined to get justice for her brother.

“He is doing good in prison. Whitemoor (in Cambridgeshire) is a AA category prison but it has a good regime and Alex does well with structure and he likes the routine,” Charlotte said.

She said the prison authorities ironically recognise his autism, even though the Home Office and the Crown Prosecution Service does not.