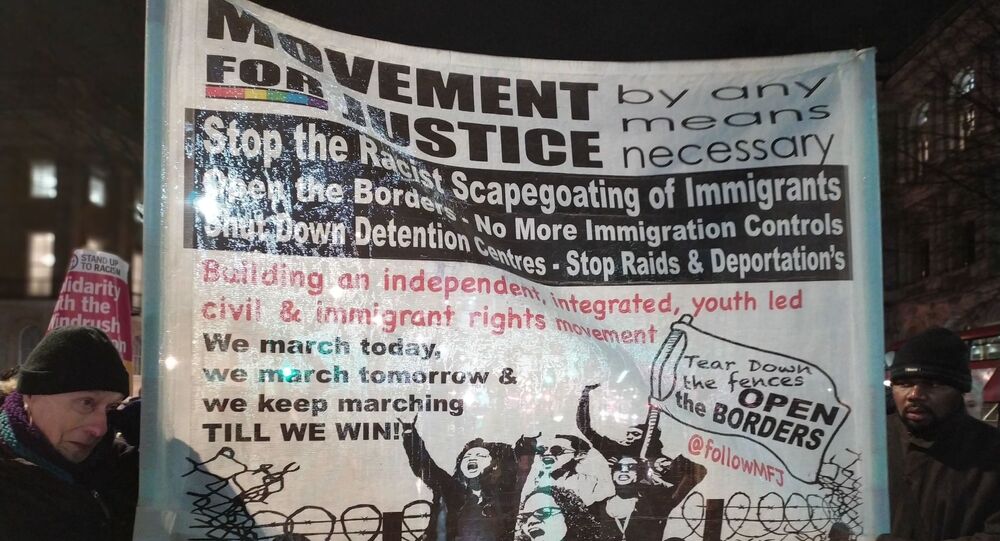 Protesters blocked traffic in Westminster on the evening of 10 February as they denounced the imminent deportation of dozens of British residents to Jamaica. Legal challenges were filed on an emergency basis to stop the charter flight with what the government says contained criminal offenders, but campaigners have pushed back against these claims.

​A UK charter flight containing an estimated 20 people took off from Heathrow Airport for Jamaica on the morning of 11 February, albeit with a greatly reduced passenger manifest as dozens of British residents were not deported following a temporary stay on the Home Office’s plans by the Court of Appeal.

​The British government said they were deporting people back to Jamaica because they had been convicted of crimes in the UK resulting in sentences of 12 months imprisonment or more.

“We make no apology for trying to protect the public from serious, violent and persistent foreign national offenders”, the BBC quoted the Home Office as saying.

"It is absolutely right that when they have served their sentence that we send them out of the country... They are not British nationals, they are not members of the Windrush generation, they are all foreign national offenders", Chancellor of the Exchequer Sajid Javid told BBC Radio 5 Live.

Some of the detainees were not deported as the Court of Appeal found that the Home Office had violated its own guidelines, which state that detainees subject to charter flights must be given, “a minimum of five working days’ notice of removal so that he or she may seek legal advice”.

In the week leading up to 11 February, the government provided O2 mobile phone SIM cards to some detainees who were bound to be deported to Jamaica. In theory, they were to use the O2 SIM cards to speak to lawyers, but there was no mobile network, ostensibly due to a telephone “mast outage”.

As a result, these detainees could speak neither to lawyers nor to family members.

Court of Appeal Judge Ingrid Simler issued an injunction against the deportations of any detainee who was given an O2 SIM card to use to contact lawyers during this time period.

The Home Office appealed Judge Simler's injunction decision, but the move was unsuccessful.

It is unclear how many people were held in the Brook House detention centre near Gatwick that were not covered by the injunction, Duncan Lewis explained.

“Some may have had individual challenges or deferrals, but Javid is saying this morning that around 20 [people] were on the flight”, they added.

The legal firm said that they're still confirming reports and contacting clients, so they "can’t give out numbers at this stage". Duncan Lewis, which specialises in immigration cases, hopes that the overall picture becomes clearer "as the day progresses”. Family members remained confused and uncertain as to whether or not their loved ones would be spared the charter flight to Jamaica.

Even after the Court of Appeal ruled against the Home Office, detainees who should have benefited from the injunction still found themselves loaded onto transport vehicles heading for the airport to be deported to Jamaica. But according to campaigners, some detainees were ultimately able to persuade the guards transporting them that they were protected by the court injunction.

​The idea that all of the people targeted for deportation are violent criminals has been challenged by those campaigning on their behalf. Some had committed low-level drug offences, minor fighting, and traffic violations, according to Jasper Lee of BAME Lawyers for Justice.

Campaigners also pushed back against the idea that this was a simple matter of deporting "foreign nationals": “These people are as British as Boris”, Johnson Bella Sankey of Detention Action told BBC Newsnight:

​On the evening of 10 February, a coalition of organisations and every-day members of the public blocked traffic outside Number 10 in opposition to the deportations. They called for an end to the expulsions and told stories of friends and family members that they knew who were taken by authorities to be sent to Jamaica, in many cases a country they have not been to since they were children.