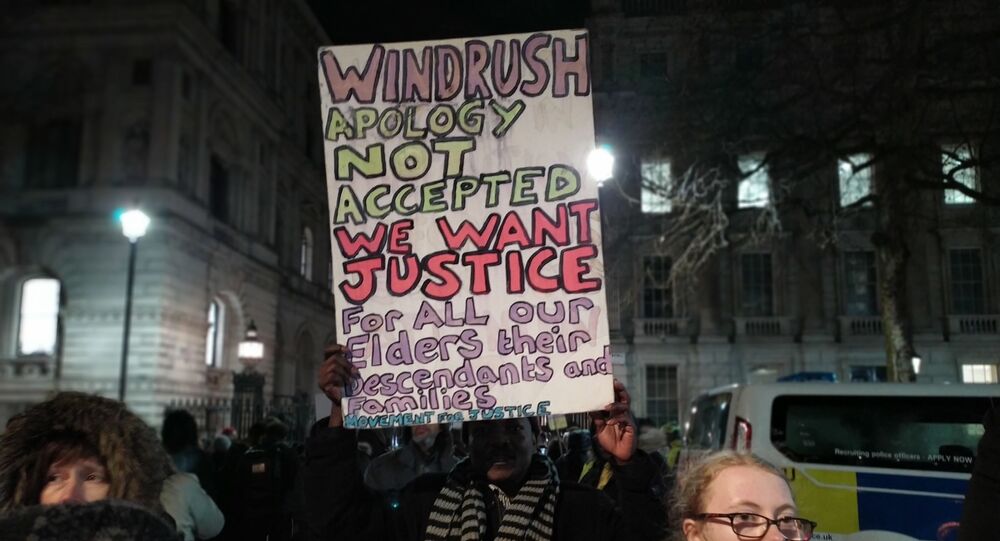 Around 30 community groups participated in the second major protest demanding an end what they consider to be unfair deportation practices against British residents. Lawyers, organisers and attendees described the latest planned deportations of dozens of people of Jamaican ancestry as a continuation of the Hostile Environment and Windrush scandal.

Between 150 to 200 people endured low temperatures and intermittent pouring rain outside the UK Prime Minister's residence, on the evening of 10 February, to denounce the latest scheduled mass deportations of British residents to Jamaica. "This wholesale deportation of people to Jamaica, tearing them away from their families is unjust, inhumane and racist in intent", argued Zita Holbourne, National Chair of Black Activists Rising Against Cuts (BARAC UK). Holbourne, who is also a co-founder of BAME Lawyers for Justice, said that there is a "direct link to the Windrush scandal as these are people who are part of Windrush British families".

Thousands of men and women from the Caribbean were recruited by the British government to help re-build post-war Britain between 1948 and 1973. They were known as the Windrush generation, and were subjects of the British Empire. Despite the fact that they settled in the UK and proceeded to have children, and grandchildren, thousands of members of this generation found themselves falling foul of Theresa May's Hostile Environment immigration policies. They were fired from ther jobs, and denied housing and welfare support. Many, including British citizens, were either deported or threatened with deportation, and their landing cards - which would have proved that they arrived in the country before 1973 and where therefore legally British citizens or residents -  were destroyed.

Thought the #Windrush scandal was over?

🔘Only 36 people have received compensation
🔘Gov estimates 15,000 might be entitled
🔘Home Office hasn’t bothered to try to contact some eligible people who are overseas
🔘People are scared to come forward https://t.co/LoHDTxTPcK

Movement for Justice took the lead in organising the rally, though it was also supported by groups such as Detention Action, BARAC UK and BAME Lawyers for Justice.

Winston Walker said he came to support the demo because he was himself affected by the state's immigration policies.

"I'm a Jamaican as well. They still can do it to me I don't have the Red Book [British Passport]", he said.

Walker, who has lived in the UK for 20 years, said he knows people who have been deported including family members.

"I'm here because everyone deserves basic human rights", said Stephanie Rost,"and the government needs to extend that [to people of Black African descent]".

Jaron Escoffery, founder of the Boukman Academy, argued that these particular deportations are "racist" because "there are other citizens from the commonwealth... Australia, Canada, within the UK prison systems back to their countries [of origin] because they've been in the UK for a certain amount of time". Meanwhile other people who are Black "who were also part of the commonwealth... who have lived the majority of their lives, if not all of their lives" face deportation.

The Demonstration Moves to the Streets

While the demo began on the pavement across from 10 Downing Street, demonstrators ultimately decided to make their protest more meaningful by blocking traffic.

Downing street is brought to a standstill by protestors who oppose the mass deportation of British residents and nationals from the UK.

"We want human rights, no charter flights" they chant.

​The police seemed unprepared for shift of demonstrators onto the street and after about ten minutes started to ask people to move back to the pavements. However, most declined to do so. Arguments broke out between motorcyclists trying to pass through the demonstration but the protesters stood firm. Buses started to u-turn out of Downing Street to find alternative routes.

“We have to show that business as usual cannot go on while these kind of things are happening”, Shabbir Lakha said in defence of the decision to block traffic, "and We have to hold this government to account, and this is how we do it. We have taken to the streets - right outside of Downing Street - our message to [Prime Minister] Boris Johnson is clear 'were not gonna just stand by and let you carry on with what you're doing in silence and in peace'".

“We have to show that business as usual cannot go on while [detentions & deportations] are happening” says @ShabbirLakha, of @STWuk, who argues that blocking streets is justified when 100s of people, taken from their families & denied access to lawyers, face imminent deportation pic.twitter.com/qJoVYVda9o

​Eventually the demonstration moved down the Houses of Parliament blocking a four-way intersection where Parliament Street and Bridge Street meet.

The demo against charter flights which began across Number 10, travelled down Downing Street to the intersection w/ Parliament Street & Bridge Street, blocking four main roads. The demands include an end to deportations & like for like treatment w/ 'old commonwealth' countries. pic.twitter.com/zMVhQnKGDn

An attempt by an apparent govt vehicle to break through is defeated & the crowd cheers as the car is forced to reverse. Some shoving between police & civilians can be seen. A temp legal victory was announced from CoA in favour of detainees denied access to legal advice #Jamaica50 pic.twitter.com/9ScGpX7mxK

​Are The Deportees Serious Criminals?

The government has argued that the people due to be deported are hardened criminals and that their removal from the country is proportionate. "The people on this plane are people who have committed very serious crimes, whether it’s rape, manslaughter, murder", said Rishi Sunak MP, Chief Secretary to the Treasury. But Holbourne rejected Sunak's claims as false.

"Some of the people we have spoken to who were convicted were not for these crimes. One was sentenced to [two months] under now defunct joint enterprise law. One did [seven] months for fighting a man sexually harassing his 13 year old daughter. A blind man was taken to be deported with no criminal record. We know from previous flights there were people criminalised by virtue of their immigration status." "They are not foreign nationals. Many came to the UK as children to join their British families". 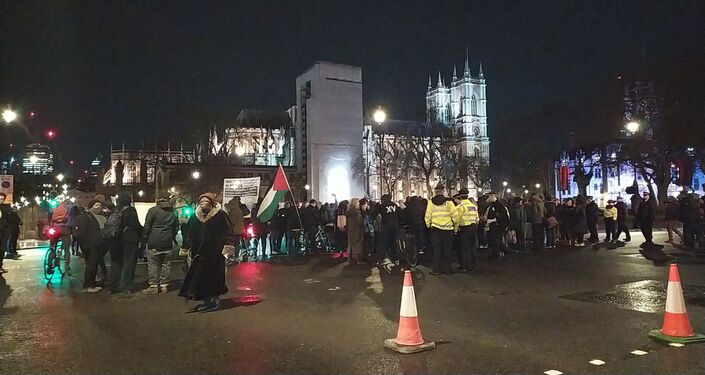 Lee Jasper of BAME Lawyers for Justice, said that deportees are made up of people with minor level convictions such as low level fighting, traffic violations and low level drug dealing, "not the serious psychopathic, rapist and murderers described by Boris Johnson". People who would have been British, "had their parents not been denied citizenship under the Windrush Scandal", are now finding themselves "subject to arbitrary deportation" Jasper said. This is despite the fact that many have resided in the UK for 25 - 30 years, including those born and raised in the UK.

Both Holbourne and Jasper spoke of the detainees suffering a "triple punishment" of serving their sentences, being detained, and then deported.

'It's because they're black'

Jasper didn't mince his words. Like many other attendees he made clear his view that the people scheduled to be deported on 11 February are in their positon "because they are Black. That's it pure and simple". People from "White" commonwealth countries such as Australia or Canada are not subject to the same deportation proceedings if they have lived most their lives in the UK, the demonstrators pointed out.

"Rolf Harris is a case in point [he was convicted of indecent assault against girls 13 - 19 yrs old]... why isn't he being sent back to Australia? Because he's White, and the people on that plane are Black. That's it, pure and simple" Lee Jasper, BAME Lawyers 4 Justice (@BameFor) pic.twitter.com/OxD8C9yE8G

At the very moment that the demonstration was happening parliament was debating the Windrush compensation scheme.

My constituent was 5 years old when he arrived in the UK from Jamaica. All of his family live here and he takes his younger brother to school most days.

Why won't the Government do the right thing and stop the deportation flight tomorrow, which will tear him from his family? pic.twitter.com/RvlcWMPgiH

Partial Success in the Court of Appeal

A series of emergency appeals have been launched on behalf of the detainees. They all have their own individual appeals, but there are also two class actions which have been filed "one to halt the whole flight, [and] one for those who had no access to legal advice because the phones were down", Holbourne said. In the middle of the demonstration it was announced that the Court of Appeal temporarily stayed the deportation of detainees who did not have access to a lawyer while they were held by immigration authorities. In theory the decision applies to at least 56 detainees, however, support groups have noted that people are still being transported to be flown out of the country despite apparently qualifying for protection under the court order.

​"When individuals  are being transported  to the plane they can also seek asylum if they fear for their lives on return to Jamaica and believe they are in danger. Last year and with previous flights one third at least to half were taken off the flights last minute", Holbourne said.

Despite the partial victory organisers were under no illusion that their ultimate objective, seeing an end to the Hostile Environment immigration policies and ending mass deportations of British residents, is anywhere close to being achieved.