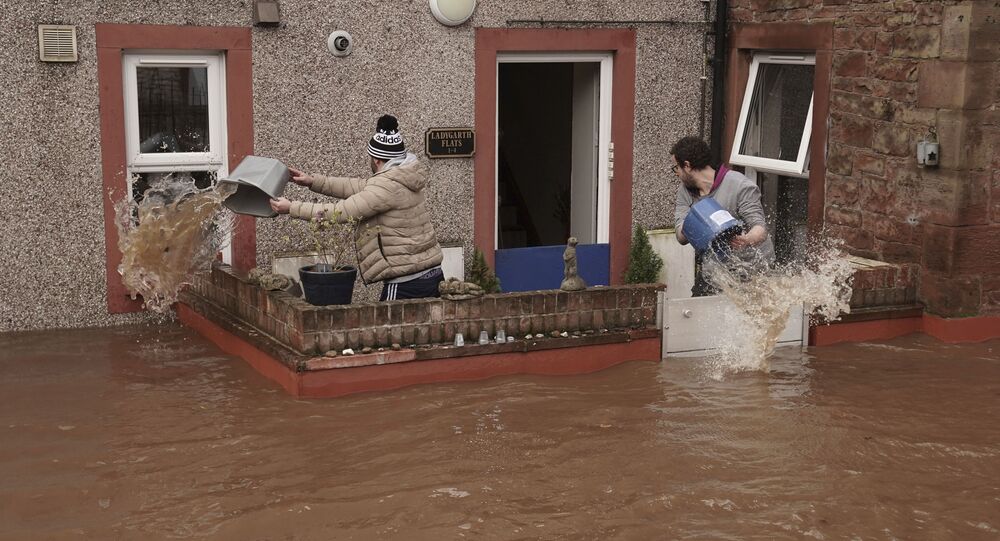 244 flood alerts and 118 flood warnings remain in effect in England, Scotland and Wales, as the UK struggles to recover from Storm Ciara.

Hurricane-force winds pounded the UK and northern Europe over the weekend causing a raft of cancelled train journeys, flights and sporting events in the region. Storm Ciara brought with it gale force winds ranging from 150-156 kilometres per hour in northern Wales and the Isle of Wight respectively.

Sunday was an extreme #weather day across the UK due to the passage of #StormCiara. The strongest wind gust recorded at 97mph at Needles Battery on the Isle of Wight.
Here are the rest of the extremes… pic.twitter.com/QIWTPgsr0r

​The UK’s Meteorological Office published over 250 flood warnings, with at least 10 rail companies putting out “do not travel” warnings and 20 others telling passengers to expect severe delays. Key rail hubs - London’s Kings Cross and Euston station - were filled with crowds of delayed and frustrated passengers into the night on 9 February.

Trees fell and thousands of homes found themselves without electricity.

Social media was awash with pictures and videos of major flooding across the UK including in Aberdeen, Gwydr Castle, Yorkshire, Leeds, and Cumbia.

#StormCiara brings strong winds, tidal surges & high waves over the weekend. There is a risk of flooding around much of Scotland’s coast Sat & Mon. SEPA will issue Flood Alerts for affected areas - check https://t.co/5v90r5aVmg pic.twitter.com/0Ked5XKI3L

Our dedicated @Calderdale staff continue to deal with #Flooding impact across borough. We are spirited & #resilient but it’s surely time this beautiful place is recognised nationally as a tier 1 risk by @DefraGovUK @mhclg & @EnvAgency to ensure a safe & sustainable future 1/2 pic.twitter.com/ab2kCV7s8c

This is where our local council wants to build 600 new homes. Not only greenbelt enjoyed by humans and needed by wildlife. It's a flood plane.#Flooding #calderdale @Calderdale @BorisJohnson who doesn't think there's a big issue here.@HollyLynch5 pic.twitter.com/KUW0Wf5iul

There are currently 244 flood alerts and 118 flood warnings in place #StormCiara #flooding https://t.co/sG6ZlzrXVd

There are still some flood warnings in place due to #StormCiara. Please stay safe.

​Dozens of flights were cancelled in London, Frankfurt, and Brussels due to strong winds. Ferries also stopped running in the English Channel and sea ports shut down in Dover and Calais due to high waves.

Sporting events which were either cancelled or called off in the UK include four Women’s Super League matches, Scotland’s Women's Six Nations match against England, Horse Racing in Exeter and Southwell, and the London Winter Run 10k.

Football matches in the Netherlands, Belgium and Germany were also either cancelled or rescheduled.

The Met Office said that the UK experienced the worst of Storm Ciara by around 9pm local time on 9 February.

Fast and Furious: British Airways Flight Breaks Speed of Sound as It Flies Over North Atlantic