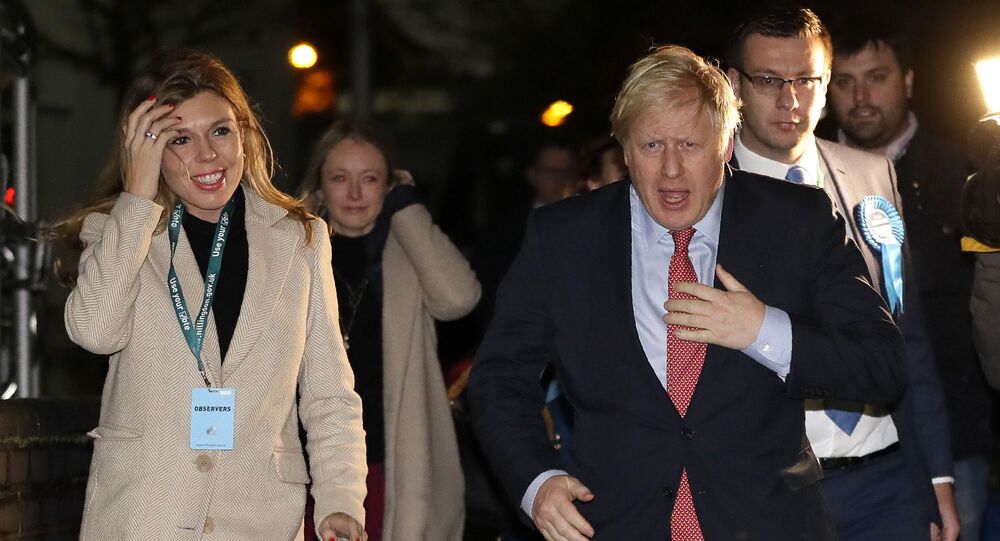 Carrie Symonds, the Conservative Party’s former head of communications and partner of British Prime Minister Boris Johnson managed to secure some key allies at No. 10 Downing Street during her career. However, some reports now suggest that the PM’s Chief Special Adviser Dominic Cummings was not one of them.

It looks like British Prime Minister Boris Johnson is facing a choice between his heart and his head, the Daily Mail reported on Monday citing sources within the Treasury, saying the PM’s girlfriend Carrie Symonds and his chief adviser and mastermind behind the 2016 Leave campaign Dominic Cummings have clashed over an upcoming Cabinet reshuffle.

Symonds had worked as a press officer for the Conservative Party since 2009 and acted as the party’s Director of Communications for a year until August 2018, over the course of which she made some important friends and allies, including UK Chancellor of the Exchequer Sajid Javid, Defence Secretary Ben Wallace, and MP John Whittingdale.

According to the Daily Mail report, Cummings was not happy with Wallace’s and Javid’s presence in the UK Cabinet and urged the prime minister to get rid of the ministers in the new cabinet, as well as several other Conservative advisers with links to Symonds. The reshuffle is expected to happen soon. The outlet alleged that Johnson refused to fire the Treasury chief, but Wallace’s future in the cabinet remains uncertain.

“There was always a risk that Carrie and Dom were going to fall out and that the PM would get caught in the crossfire”, the Treasury source, who remained anonymous, told the Daily Mail. “Dom is trying to run the government the same way he won the referendum campaign. He doesn’t care who he insults if it makes the government more effective”.

“Carrie is just as determined and is very loyal to her friends”, the source insisted.

According to reports, despite leaving the party’s head of communications post more than a year ago, Symonds retained substantial influence within Downing Street and remains a key adviser to her boyfriend Boris Johnson, who now risks being caught in the middle of a power struggle between two officials whose political styles diverge substantially. Symonds, who is now working in public relations for Bloomberg’s ecological initiative Vibrant Oceans, is known for her networking and campaign skills, as well as being a charismatic character.

© REUTERS / Toby Melville
Travel Ban: Boris Johnson's Girlfriend Carrie Symonds Barred From US Due to Somaliland Trip – Report
From his part, Cummings, who has repeatedly been praised by Johnson for his role in the Brexit campaign, is well known for being frank and even insulting from time to time to British mainstream media. It is believed that it was actually Cummings, who was behind the curtain over a recent row between the Conservative Party and BBC Radio 4 show Today pointing at its alleged pro-remain bias in election campaign coverage.

So BoJo, what’s it going to be, heart or head?