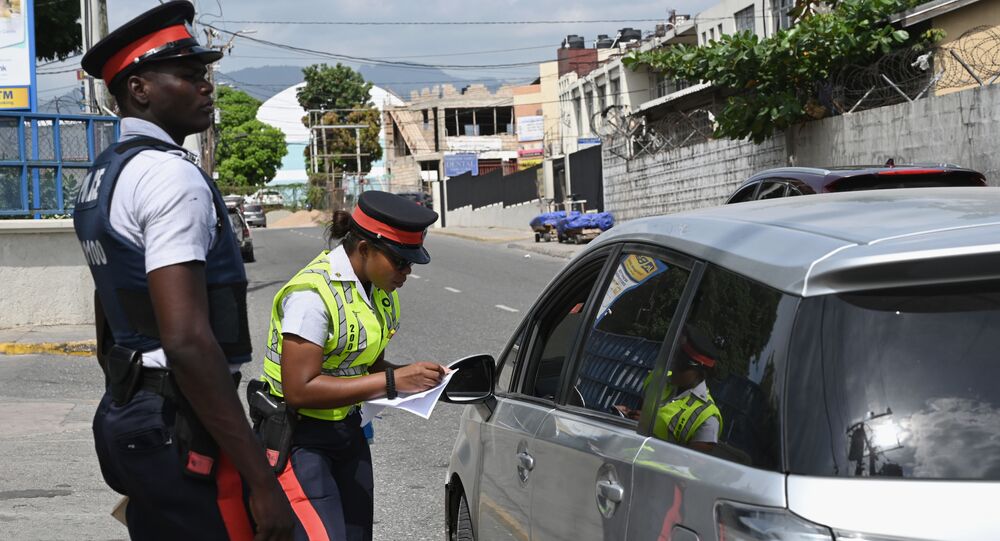 People gathered outside Downing Street on 6 February to protest at the government’s resumption of deportations to Jamaica. It comes less than two years after the Windrush scandal, which brought down Home Secretary Amber Rudd.

Up to 50 people are due to be deported to Jamaica by the British government on Tuesday, 11 February.

The advisory panel of a review into the Windrush scandal has warned the government not to resume mass deportations until after its report is published and 170 MPs have written to Boris Johnson, urging him to stop the deportations.

Jacqui McKenzie, an immigration lawyer who is on the panel, said the government was "playing to the gallery" with the deportations, and that "being tough on migration is popular".

Between 40 and 50 people who were born in Jamaica are due to be deported on a single flight on Tuesday. Many had been given “indefinite leave to remain” in Britain but had committed criminal offences while others had overstayed their visas.

Ms McKenzie said: "I am not saying that you shouldn’t be deporting anyone. A country has to be able to defend its borders. But in some of these cases they have come here at primary school age or even earlier and are now in their 30s".

"They have often been convicted for drug dealing but they have served their sentences and in some cases have been out for 10 years and are leading good lives. So why are they being deported now?"

The Home Office plans to deport 50 people to Jamaica on 11th February.

Cancel the flight until the Lessons Learned Review is published and its recommendations implemented, or risk repeating the Windrush scandal.

Over 170 colleagues and I wrote urging the Prime Minister to act. pic.twitter.com/cubfqsBPwx

​She said in one case last year a father was snatched by immigration officials and put on a plane to Jamaica, traumatising his teenage daughter who was about to sit her GCSE exams.

But UK government minister Rishi Sunak said: "The people on this plane are people who have committed very serious crimes, whether it’s rape, manslaughter, murder. These are serious offences and we have a established process for ensuring that where we have foreign nationals who have committed crimes here, they should be, where possible, deported. That’s something that’s sensible and proportionate.”

​The Guardian reported that many of the Jamaican-born detainees facing deportation were having trouble contacting lawyers because of poor mobile phone coverage at the Harmondsworth and Colnbrook removal centres, near Heathrow airport.

The BBC’s Newsnight programme said it had seen a leaked copy of the review, which recommended the government end the deportation of foreign-born offenders who came to the UK as children.

UK Prime Minister Boris Johnson consented to deporting 50 Jamaicans yesterday most of whom are not criminals and some who have been living legally in the UK from they were children. This decision caused an uproar in the UK parliament yesterday but sigh didn't change the outcome.

​The British government and the Jamaican authorities insist those being deported are criminals and are not from the Windrush generation, but MPs and activists have criticised the proposed deportation flight.

Labour David Lammy told the BBC: “We stopped deporting criminals to Australia in 1868, why have we started doing it through the back door this way?”

He said he knew of one young man who was about to be deported five years after coming out of prison, where he served two months for grievous bodily harm.

Not being funny but look how many British born Jamaicans the deported and stripped citizenship from or someone with papers and deporting them because of crime. Don’t see them doing that with all the pedos and rapists.

​Ms McKenzie said the deportations did not just affect Jamaicans.

She said people were being deported to Ghana, Nigeria, Pakistan, Bangladesh, India, Sri Lanka, Afghanistan, Iraq, Albania and Romania and she said in many cases they were being sent back to "unsafe environments."

Natalie Green, a Jamaican-born teacher in London, accused the government of being "racist" and "unethical".

She said: "If they have been given indefinite leave to remain it’s unethical to deport them. Obviously it depends what crimes they have been convicted of but most will have families and friends and jobs here. Their whole lives are here. If they have served their sentences in prison why can’t they be allowed to establish a future here?"

In April 2018 then Home Secretary Amber Rudd resigned after it emerged there were secret targets for deportation, contradicting what she had told Parliament.

The Home Office was accused of the ill-treatment of people belonging to the so-called Windrush generation, who arrived in the United Kingdom from the Caribbean under free movement policies between the 1940s and 1970s. Dozens had been deported back to Jamaica and other islands despite having lived and worked in the UK for decades.