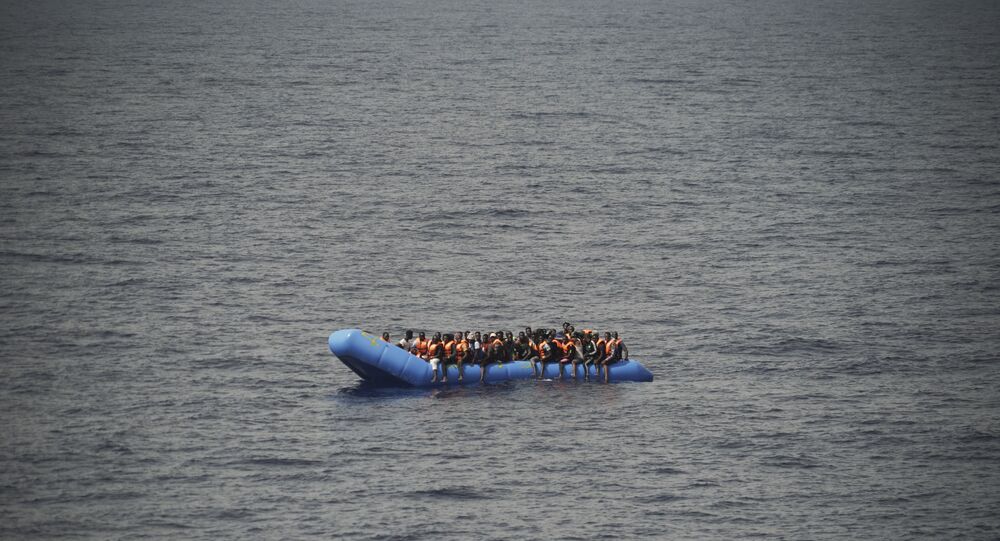 Record-Breaker: Over 100 Migrants Captured in One Day Trying to Cross English Channel

Despite Home Secretary Priti Patel’s efforts to forge cooperation between the UK and France to stem the issue, migrants continue to sail in droves from the latter to the former, leaving many to question if French authorities are really making sufficient efforts to solve the problem.

Over 100 migrants are reported to have been intercepted while crossing the English Channel on Friday, February 7, in what marks the largest recorded number of such incidents in one day.

A total of five inflatable rafts were stopped by the UK Border Force, which contained a total of 102 people from a variety of countries, including Syria, Iran, Afghanistan, Pakistan and India according to reports. Nine of the individuals are said to have reached UK shores in Kent before being detained by local police.

France - the departure point for those crossing the channel to the UK - is reported to have detained around 30 other individuals who were also intending to make the risk-fraught journey across the freezing cold English Channel.

'Those found are usually taken to Dover for processing'

It's lunacy to act as a "ferry service" for people who are attempting to illegally enter the UK (and from a safe country no less)...https://t.co/v1FCMbdxtA

Conservative Party MP for Dover & Deal Natalie Elphicke, who is known to be vocal on the issue of migration across the English Channel, is widely quoted as saying that it “beggars belief that another flotilla of small boats got past the French again today.”

“These are serious security lapses and we need an urgent explanation from the French as to what they are doing to get a grip on this situation. I am mindful that the search and rescue operations this week have involved all three border force vessels, RNLI lifeboats, HM Coastguard, a plane, a helicopter, ambulance services, police and much besides. These are emergency services for the UK, diverted from vital day-to-day operations,” she reportedly added.

In an appearance on Good Morning Britain, Miss Elphicke also took subtle aim at the French, saying that, “I think the best deterrent will be when people know that wherever they’re rescued in the English Channel, they’ll be taken back safely and securely to France and in that way we can put a stop to this dreadful trade, this particular route in trafficking people.”

On @GMB this morning setting out my concerns about the latest surge in migrant crossings pic.twitter.com/iE66hNGSnb

The news comes hot on the heels of a similar incident on Thursday, February 6th, in which 90 people were picked up trying to cross the channel. Among them, according to the Telegraph, were at least 15 small children and many women.

Previously, September 10th 2019 held the record for the highest number of migrant crossings in one day, when 86 individuals reportedly made the voyage to try and reach UK shores.

According to estimates by the BBC, the number of migrants arriving in the UK from across the channel rose more than sixfold over 2019, despite London’s efforts to crack down on the problem. At least 1,892 people crossed the English Channel in small, often rubber, boats in 2019. In contrast, according to government statistics, 562 migrants attempted to sail the channel to reach the shores of England in 2018, with 297 making it to dry land.

Despite being an issue for the UK, the number of those trying to reach its shores is still dwarfed by the much larger movement of people across the Mediterranean to continental Europe, numbers which exceeded 100,000 people last year.

UK Home Secretary Priti Patel met with her French counterpart on a number of occasions throughout 2019 and in September of that year agreed on a joint action plan to try and stem the problem of cross-channel migration. The measures aim to reduce the number of migrants attempting the crossing and eventually for "attempts to cross the channel in small boats to be an infrequent phenomenon by Spring 2020."