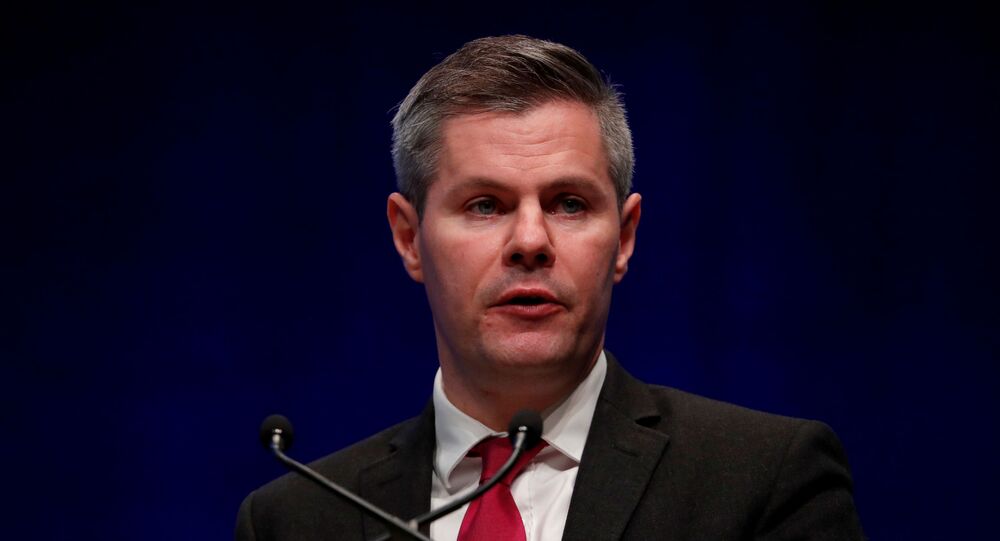 Derek Mackay, a politician who was tipped by the Scottish press to be on track as the next leader of the Scottish Nationalist Party (SNP) and occupied the second most powerful position in the Scottish government, has seen an abrupt end to his career after his private messages to a 16-year-old schoolboy emerged.

Sputnik is taking a look at the career path of Derek Mackay, a long-time political representative for the town of Renfrew, east of Glasgow, who seemed to be well-liked by colleagues and activists and whose departure on Thursday marked a scandalous end to an otherwise promising political career.

Mackay, whose upbringing was marked by violence, domestic abuse and alcohol, grew up in a council estate in Renfrew in the 1970's and 80s. When devolution came to Scotland in 1999, Mackay dropped out of university at the age of 21 and instead ran for political office. He became the youngest ever male local councillor at that time and ended up leading Renfrewshire Council in 2007.

As a young pro-independence activist in the late 1990s and early 2000s, Mackay was known to criticise former First Minister Alexander Salmond for his “gradualist” approach towards Scottish statehood. The dominant view in the SNP at the time, as represented by Salmond and his successor Nicola Sturgeon, was that the best approach to secure independence from London was via a gradual devolution of powers from Westminster, followed by a referendum at a later date.

In 2000 a split in the SNP emerged over whether a referendum should be called before pushing for independence. Mackay was solidly behind pro-independence politicians like Jim Mitchell who argued for scrapping the referendum policy altogether and pushing directly for statehood.

Yet in December 2011, less than 10 months after becoming a Member of the Scottish Parliament (MSP), he found himself appointed Minister for Local Government and Planning in Salmond's government. He then took on the job of Minister for Transport in December 2014, where he successfully survived accusations that cuts under his watch led to the structural failings of the Fourth Road Bridge. He ultimately became Minister for Finance and Constitution under First Minister Sturgeon in 2016.

As Minister for Finance, Economy and Fair Work, Mackay was the second most powerful cabinet member, as he had authority over how the country's £30 - 34 billion annual budget was to be allocated. His portfolio expanded in 2018 to include “the Economy” and “Fair work”, the former at his suggestion to the First Minister.

As an example of his responsibilities, Mackay led the nationalisation of the Ferguson Marine Shipyard after it was at risk of collapse in 2019, and he oversaw the government's trade and investment strategy, which includes the objective of helping to boost the value of exports from Scotland to 25% of its GDP by 2029. The Finance Minister’s Economic Action Plan, published in January 2020, set out his vision for transitioning to a carbon neutral economy, growing exports and ensuring a Scottish National Investment Bank is established by the end of the year.

His department was also responsible for financing the 50,000 new affordable housing units which are due to be completed in Scotland by 2021; though controversy arose after it was revealed that housing lobbyists were pushing Mackay to maintain Help to Buy subsidies which have been criticised for inflating housing prices.

His style of speaking often excited the grass-roots while simultaneously provoking ire from London. He was recently derided by the Tories for characterising those in Westminster as his “imperial masters”.

But his career in politics and his potential to succeed Sturgeon as leader of the SNP came to a humiliating end on Thursday morning, after The Scottish Sun published what they allege are 250 social media messages between the ex-Finance Minister and a 16-year-old student.

Mackay was due to present his 2020 - 2021 budget for Scotland the same day of his resignation, but Kate Forbes, Minister for Public Finance and Digital Economy, presented the budget at 14:50 instead.

The boy and his mother agreed to reveal the messages sent via Facebook and Instagram after deciding that the six-month long conversations became inappropriate, according to The Sun. After Mackay told the boy he was gay, the boy responded, “As long as your not trying anything with me I don’t mind u being gay”.

The Finance Minister then asked the boy if their chats were “between us ?”. When the boy responded affirmatively, Mackay wrote back, “Cool, to be honest I think you are really cute”.

“Nicola Sturgeon should remove him from his position. I don't know if he should lose his job but he should be dealt with very seriously.", the boy's mother was quoted as saying.

Mackay: "I Am Truly Sorry"

Mackay, who separated from his wife of 12 years after coming out as gay in 2013, said in a statement that he took “full responsibility” for what he did and apologised “unreservedly” to the boy and his family. Sturgeon noted that Mackay had “made a significant contribution to government, however he recognises that his behaviour has failed to meet the standards required”.

He has already been removed from the Scottish government's website, which typically lists all the positions of the Scottish cabinet, though who will replace him as Minister for Finance has yet to be announced.

A media spokesperson confirmed that they had nothing to add to the First Minister's statement.