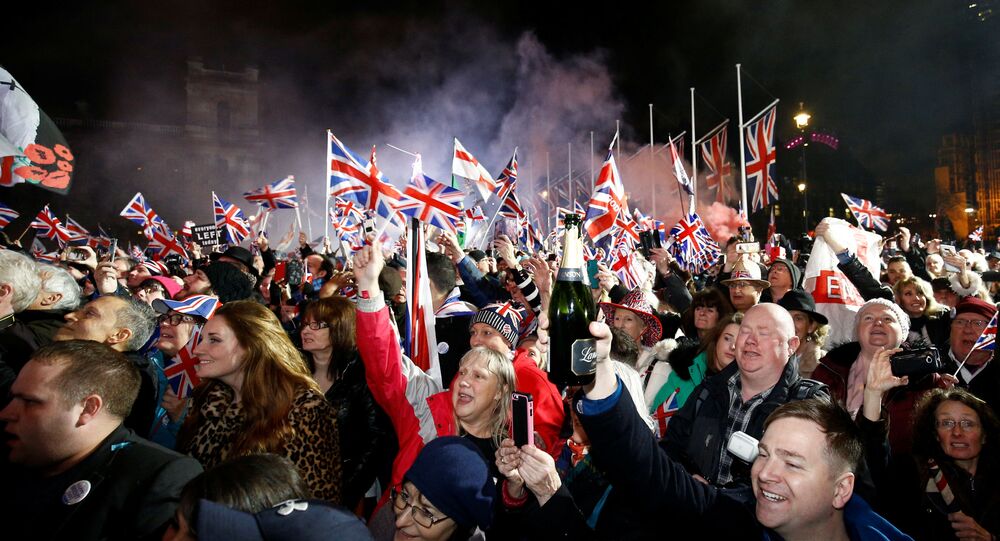 On Friday, the UK finally departed from the EU after 47 years of being part of the bloc and its predecessor organisations, as well as following nearly four years of internal struggles to deliver the divorce.

Despite having had a tenure described by many as being no less than disastrous, Theresa May, who failed to deliver Brexit in due time as her deal was voted down three times in the House of Commons, has decided to partly attribute yesterday's departure from the bloc to her own deeds.

The former UK prime minister turned to Twitter late on Friday to congratulate people on Brexit, saying that "we" have delivered on the results of the 2016 referendum, appearing to suggest that she played an important part in the finalisation of the UK-EU divorce.

At 11pm tonight, Britain will leave the European Union. After more than three years, we can finally say that we have delivered on the result of the 2016 referendum and have kept faith with the British people.

​People's reactions, however, weren't long in coming and the Twitter post received more than 6,000 responses in 16 hours, with people ridiculing May over her statement.

I thought you were stalling to get BRexit done. Please don't include yourself that you delivered you couldn't get it done in three years Boris got it done in half the time. He will go down in history as the champion not you.

#TheresaMay is a remainer. She was making gargantuan mistakes or purposefully undermining it, poisoning the Brexit opportunity for two years.

You delivered nothing it was Boris that has delivered Brexit, you never stood up for Brexit you never believed in it yourself your lose Boris's gain.

Can anyone believe that @theresa_may thinks she has any part to play in brexit ??

The worst PM this country ever had now says we have delivered on Brexit, where is the we coming from? she tried to destroy Brexit for her own ends and had no thought for the Country or the people and now wants to be part of it in some way.

Imagine if you had delivered a brexit instead of cowtowing to the EU and delaying it. We might have a modicum of respect for you.

​Theresa May's tenure as UK prime minister came to an end on 24 July 2019 after a tearful resignation brought on by her failed efforts to deliver a viable Brexit deal.

© REUTERS / HENRY NICHOLLS
Got Brexit Done: So What’s Next for Boris Johnson After Finally Leading UK Out of EU?
Boris Johnson, who assumed the prime ministership and the lead of the Conservatives, promised to deliver Brexit on 31 October with or without a formal withdrawal agreement.

Although the final divorce date was postponed until 31 January 2020, Johnson still managed to accomplish the critical mission of his tenure.