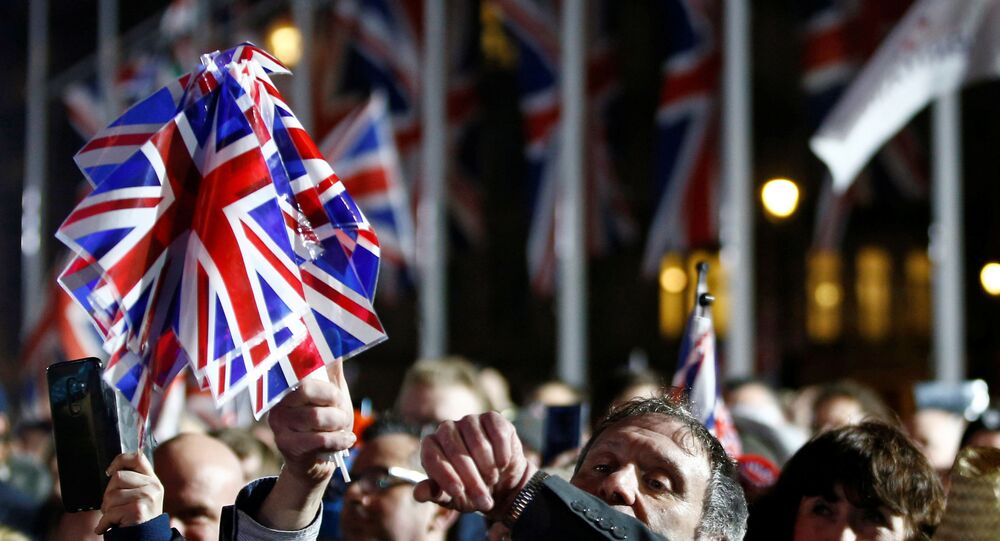 Today is Brexit Day and to mark the occasion London-based game developers Panic Barn have released a new Brexit-themed video game for Nintendo Switch. "Not Tonight" takes place in a dystopian post-Brexit Britain where your character must navigate life as an Eastern European migrant trying to keep your head above water.

It's a far cry from Pong and Mario, but will we see more video games take a political angle going forward?

Panic Barn founder Mike Rose has shared his views about the often apolitical industry, the inception of the game, and why he chose to develop a Brexit-themed video game.

Sputnik: What inspired your game, "Not Tonight?"

Rose: I guess just what's going on in the country right now. The game originally was being built just as a straight up Bouncer Simulation: "Do you let people in or do you do not let them in?" And then after Brexit happened, the juxtaposition of it was just a little too much. So it all of a sudden made incredible sense for us to do this. Normally people don't like to put politics in games and I think it's wrong not to. There's a lot of people pushing saying games are art, game should be allowed to be art just as much as TV and movies, etc. So were a bit like, "Well why can't a game be political?" So yeah, it just, it all just kind of happened all at the right time. And it made sense for us to kind of put that angle on it really.

Sputnik: So when you were in the development stages it became clear that you had a chance to be satirical and topical with the game. How did you find walking the line between trying to be satirical without pushing an agenda? How did the creative process go for you?

Rose: To be honest, we did talk about it originally, but in the end, we just decided to kind of not bother. Not Tonight does not really walk the line, within the first hour of you playing it, you can tell that this game has an agenda. It doesn't get nasty about it, and it's not you know, it's not sort of pushing like, horrible values on you or anything but all of the jokes in it are very much anti-Brexit. We don't beat around the bush with it. It's definitely an anti-Brexit game. And rather than try to walk that line, we just decided to have fun with it and try to make it as funny as possible and really kind of push that line. So yeah, the answer is we did not.

Sputnik: At a time when the term gamer is almost loaded, especially when it's used in a social media context, and it sort of goes with a "right-wing slant" and you hear about when the gamers and gamer gate and things, how did your unapologetically left-wing game go down? What was the reaction to the game when it first arrived?

Rose: When we originally announced it, it was a bloodbath. I think the original announcement trailer had the exact like to dislike ratio of the actual referendum. I think there was 52% negative dislikes on it and 48% likes. I knew this was going to happen, angry people on the internet, a lot of the time, they're shouting for free, but when it comes down to it, they actually don't care in the end. We launched the game recently for PC on Steam, and it's got like a nearly 90% positive user rating on that and people enjoy it. It's just the angry people on the internet are going to be angry, and they're going to shout about things, even if actually they don't really care. They just need to be angry about something. So even though the reaction to it was, as we expected, the game itself has actually gone down really well. And the people who are playing it are mainly enjoying the jokes that are in it about Brexit.

Sputnik: You mentioned that video games aren't political enough, you think they should be more political. Do you think that as a smaller developer, you are able to have more freedom, whereas these AAA games are sort of averse to taking risks when it comes to that sort of agenda?

Rose: Yeah, hundred percent. The situation for us is that we can be like this because we don't have investors and we're not on the stock exchange and all this kind of stuff. We can make political statements because at the end of the day, the only way it can come back on us is if people just don't buy our games. Whereas a bigger company, let's say someone like Ubisoft, who has over and over again, I would say people have reacted negatively to them saying they don't want to be political. The truth is that maybe they can't because of all of the things I've just mentioned. If they are political, they are making a stand. We found this with the game when we've been talking to different platforms and different partners that we have on our other games, they are less inclined to work with us on Not Tonight, because they feel like if they make a partnership with us for this game, their user base is going to believe that they are making a statement with that.

It's a shame because I think if anything, we have proven that you can be political with games. When the PC version came out, it was our best selling launch week for any of our games that we've done by a country mile and people loved that it was political. We got so many massive YouTubers, so many reviews, because of the Brexit angle. We had it featured on the BBC and the Associated Press and everywhere, all because of this angle. At the end of the day, there was no downside to it at all, we got to put our point of view across and sell a video game. Apart from the angry gamergate-style people all having a party about it in the first place. It was a great video game launch. And that's kind of what we're hoping is going to happen with this Switch version that's coming out this week as well. But games should 100% be more political. And I quite frankly, don't know why they're not to be honest.

Sputnik: You mentioned the Switch version of the game that was coming out on Brexit Day. And obviously that's not a coincidence, or maybe is, what was the idea of putting a day in day with the so called Brexit day?

Rose: Yeah, it definitely was not a coincidence whatsoever. In fact, the game was originally going to come out late last year on Brexit Day. We had it ready to go and everything and then they delayed Brexit so we delayed the game. We have 100% purposely put out on Brexit Day you know, it's the perfect day to be talking about it. There's gonna be a decent number of people who are happy about what's happening on Brexit day. There's also a decent number of people who are not happy. And so it's just a nice little present for all of those people to be able to at least wallow in the same feelings that they have. Not Tonight shows a kind of dystopian what could happen after Brexit situation. So maybe it's just good preparation as well to play the game to see what could happen after the date.

From 'Freedom!' to 'It's All Sh*t From Here': Netizens Divided on Brexit Day