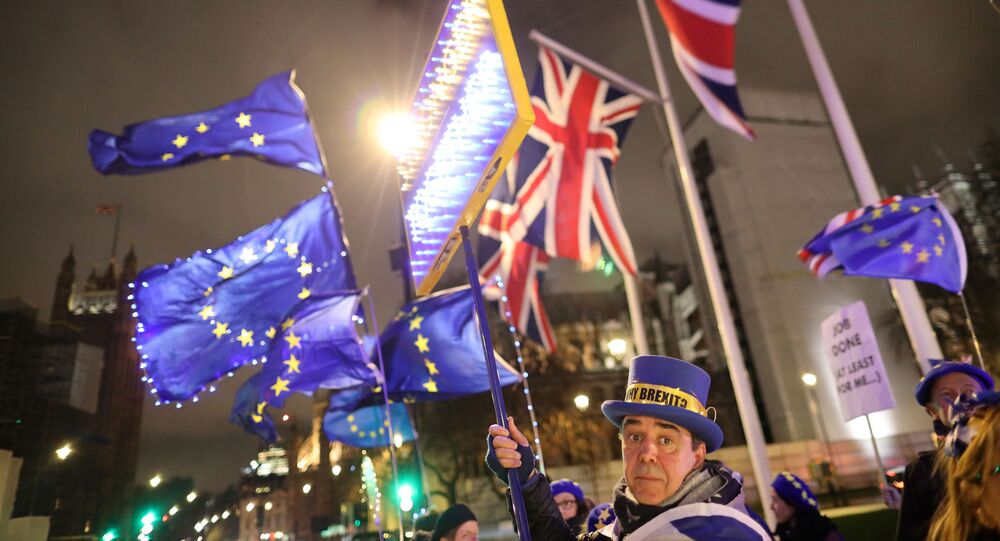 United Kingdom to Say Goodbye to EU on Friday

MOSCOW (Sputnik) - The United Kingdom will leave the European Union on Friday at 23:00 GMT, after 47 years together, but this will be only the first step toward the next chapter of the EU-UK relationship.

The UK will first enter an 11-month transition period, during which a lot of aspects of everyday life for UK and EU citizens, such as travel, will remain the same as before. EU citizens will be able to go to the UK to live or work and vice versa.

During the transition period, the UK will remain part of EU trade deals, but will be able to negotiate new trade deals with other countries as well as with the bloc itself. In addition to trade, the UK and the EU will have to hammer out the details of their relationship in security, fishing and other sectors.

According to EU chief negotiator for Brexit, Michel Barnier, 11 months may not be enough to agree on all aspects of the future relationship.

"If we want to agree on each and every point of this Political Declaration – which would lead to an unprecedented relationship – it will take more than 11 months", Barnier said on 9 January, adding that a basic agreement could be possible within that timeline.

The EU intends to "make as much progress as possible by June", Barnier said. The UK and the EU are expected to hold a meeting to assess the progress of the talks at that point.

Steven Woolfe, a former member of the European Parliament for North West England, is optimistic about what could be done in 11 months.

"I'm optimistic as already we've seen enormous movements in the European Union deciding that they can't wreck their own economy. There's the recognition now that Britain spends a lot more on their products than they do on ours, so they want to protect that. Hence we've seen a lot of work done on flights, visas, traveling into Europe has been solidified in the European parliament ... those working on trade regulations have said a lot of rules can stay the same and so on", Woolfe said.

At the 2016 referendum, Leave campaign won with roughly 52 percent against Remain's 48 percent. The vote was split nearly evenly across the entire UK. Almost half of the country set to leave did not want to do so, which left the door open for discussions on second referendum. With the exit now firmly in sight, the focus of the discussion might shift toward a potential return to the EU.

Woolfe, however, believes that the UK would be hard-pressed to vote itself back into the bloc immediately.

"For two reasons, first the EU is changing itself and there would be key conditions we'd have to face. Secondly, the economy, as many people are now predicting — quite contrary to those who predicted doom and gloom — is showing positive signs that Britain could actually thrive outside the European Union", the former MEP said.

The Remainers could plan a long campaign instead, but if "Britain thrives and the European Union declines then we're not going back in any time soon", Woolfe said.

No Hard Border for Northern Ireland

Scotland and Northern Ireland both voted to Remain, although by a small margin, and both later played a certain role in Brexit drama.

Northern Ireland, which shares a border with an EU member, the Republic of Ireland, was the subject of the talks with the EU. This border became the sticking point in the discussions. The EU has stood firmly against hard border on the island, the UK has stood just as firmly against any checks in the Irish Sea.

In the end, Northern Ireland will remain part of the UK customs territory. In the deal negotiated under the premiership of Theresa May, the entire UK, including Northern Ireland, would be part of the EU customs union and, therefore, unable to negotiate its own trade deals during the transition period.

The new deal, negotiated with Boris Johnson as prime minister, allows for trade talks during the transition period and introduces a complicated customs declarations process for goods entering Northern Ireland from Great Britain. Tariffs will be paid only on the goods "at risk of subsequently being moved" into the European Union.

Scotland has voiced concerns over its own fate, especially compared to that of Northern Ireland.

"Scotland will not only be removed from the European Single Market and EU Customs Union, it will be placed at a competitive disadvantage in relation to Northern Ireland", the Scottish government's assessment of Johnson's deal read.

The report published in October suggests that Northern Ireland will have "easier access to the European Single Market", while retaining its access to the UK market.

As a result, Scottish business might lose some market share, while "the corporate structures, investments and wider supply chains that underpin Scotland's existing international trade may be re-organised to take advantage of Northern Ireland's preferential access to the single market", the report said.

Meanwhile, the Scottish National Party (SNP) has been pushing forward the idea of a new independence referendum. In 2014, Scotland voted to remain part of the UK, but that was before Brexit. London has strongly refused Scotland's request for a new referendum.

Woolfe believes that the current government is unlikely to allow a second vote in the next five years.

"It would only be a weakened Labour government, that relies on the Scottish National Party, if they won in the future, that would grant them such an opportunity. But I don't think they would do either because at the moment if they allowed the SNP to leave the Conservative Party would control the rest of Britain forever more", Woolfe said.

Doug Nicholls, General Secretary of the General Federation of Trade Unions and Chairman of Trade Unionists Against the EU, is strongly critical of the Scottish drive for independence.

Hope We Can Still Be Friends

In the space of three years, the EU has gone from lively interest in withdrawal talks to a sort of Brexit fatigue, but the European Parliament on Wednesday bid farewell to Britain with a heartfelt rendition of Auld Lang Syne, after approving the Withdrawal Agreement.

In the United Kingdom, some will be sad and some will be glad. On the day itself, the prime minister will give a speech. A special 50p coin ($0.6) with an inscription "Peace, prosperity and friendship with all nations" will enter circulation.

The next 11 months will show whether the post-Brexit Britain can live up to this slogan on what concerns the EU.

Situation in Westminster as United Kingdom's Parliament is Recalled - Video

The EU is Trying to Divide the United Kingdom