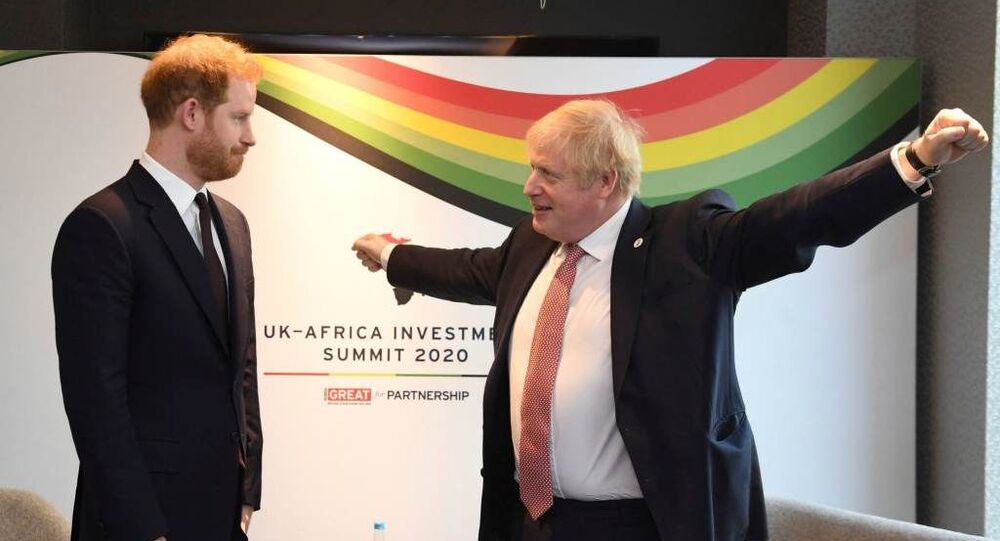 ‘I Believe I Can Lie’: What Did Boris Johnson Say to Prince Harry as He Went Full Airplane-Mode?

Prince Harry had a one-on-one meeting with Boris Johnson on Monday before heading to Canada to reunite with his wife and their son. Little is known about the details of their talk, but it produced a photo which is as bizarre as were Harry’s last two weeks in Britain.

What could be Prince Harry’s last royal engagement has marked a hilarious interaction between the renegade prince and Britain’s Prime Minister.

Harry attended the UK Africa Investment Summit in London on Monday, just hours before jetting back to join wife Meghan and son Archie in Canada.

Harry is working with conservation and children’s charities in Africa, and he has pledged in the past that the rest of his and Meghan’s work will be predominantly focused on this continent.

He had a series of bilateral meetings with African leaders before catching up with Prime Minister Johnson on the sidelines of the summit in private.

Although the specifics of the meeting were unclear, both later praised the UK as an ideal business partner for Africa as the country is working out its post-Brexit trade arrangements with other nations.

The Duke of Sussex and Boris Johnson were photographed at the summit having a somewhat bizarre interaction. Boris is seen standing with his arms outstretched as he’s about to give Harry a hug, and the Duke looks visibly unamused.

What was Johnson saying at the moment? The caption game started on social media immediately.

Boris “I believe I can fly”
Harry “I believe you can lie” pic.twitter.com/AF3351z9JL

Boris: So, so, the greenest way, the greenest way to get to er, Canadia-Canada is to-to-to hold ones arms out like this and er, flap yes flap them like a-er... like a bird, like an eagle...

I can't believe I spent last week negotiating the possibility of representing this.

BJ: I do this after putting on my deodorant - I'm an aeroplane!

PH: I've got someone to do that for me so I don't have to, or at least I did.

PH: *Walks away, deep in thought.*

‘Which Hand is my brain in’?

Prince Harry is all of us RN https://t.co/0lbYMsos2I

See, this is one of the reason why I am leaving!

Did someone forget to tell Boris that he's at a summit and not his aerobics class? Why is he such an embarrassment?

not sure what I expected looking for the full series of Prince Harry and Boris Johnson pictures but pic.twitter.com/8hparnUww7

Harry and his wife Meghan Markle will give up their roles as senior royals in a decision that is likely to change the understanding of the British royal family as we know it.

They will also relinquish their “royal highness” titles in the spring, give up state funding and repay about $3 million in public money used to renovate their official residence under an agreement with Buckingham Palace. The two will retain their titles as Duke and Duchess of Sussex and will split their time between Canada and the UK while living off their private income.

The decision wasn’t one made lightly, Harry said in a speech on Sunday. “It was so many months of talks after so many years of challenges. And I know I haven’t always done it right but, as far as this goes, there really was no other option,” he explained.

“Our hope was to continue serving the Queen, the Commonwealth, and my military associations but without public funding. Unfortunately, that wasn’t possible. I’ve accepted this, knowing that it doesn’t change who I am or how committed I am. But I hope that helps you understand what it had come to — that I would step my family back from all I have ever known to take a step forward into what I hope can be a more peaceful life,” he said.