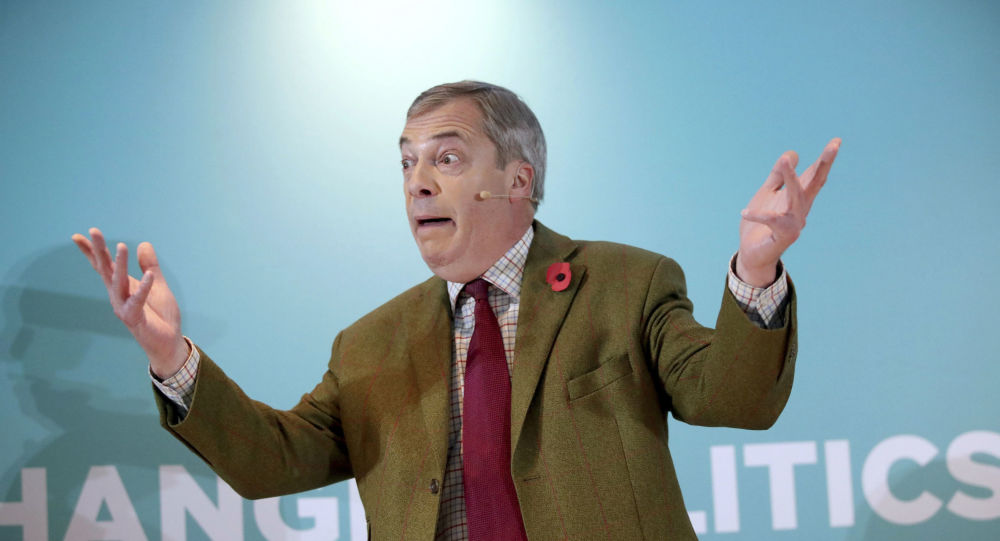 Nigel Farage has said he will be organising a Brexit festival on 31 January to coincide with the day the UK leaves the European Union. He also expressed his wish for Big Ben, which has been silenced since 2017 due to a four year restoration project, to bong at 11pm as the UK departs from the bloc.

Brexit Party leader Nigel Farage has been mocked online for comments on Wednesday morning claiming that the UK would become "joke" if Big Ben were not to sound on Brexit day.

"Boris Johnson was making a joke of it - 'Oh we'll find some mechanism where you can put a pound in'. It's almost as if the government is embarrassed by Brexit. They don't want to celebrate the moment", Farage said while speaking to Nick Ferrari on LBC.

Farage accused Prime Minister Boris Johnson of being embarrassed by Brexit and not being keen to celebrate it.

"Boris got elected on a massive majority on the basis of Get Brexit Done and he can't even bring himself as Prime Minister to say they are going to fund this to show the world we are organised and we are ready", the Brexit Party leader added.

"I frankly think that, around the world, at that moment at 11pm, if Big Ben doesn't strike, our country looks like a joke".

Twitter users seized the moment to tell Farage how they felt about the ordeal and what determines the UK's image on the world stage.

The UK is a joke, but it's our senior hams being willing to spend vast amounts of money to hear a bong noise that makes us a laughing stock, not our inability to fix a bell.

​Campaigners for Remain used the opportunity to hit out against the cosmetic aspects of Brexit as the reason for the UK being a "joke".

A country is a joke if it thinks its international reputation depends on ringing a f***** bell! https://t.co/wurycfC1XZ

​Other's directly attributed the Brexit vote to the UK's declining status in the world.

Newsflash - we've been an international joke since 24 June 2016, Nigel.

LOL, the world already sees us as a joke thanks to Farage and co. Ringing a bell to celebrate our stupidity will only add to the joke. pic.twitter.com/iwvt0H0ZPG

Big Ben, surrounded by scaffolding and unable to bong, absolutely and utterly epitomises the current state of the UK. 👏👏👏

Agreed on both counts! Personally, despite my support for Brexit I think Big Ben Bongs are as daft as blue passports - this is inconsequential and trivial.

​However, some social media users tweeted in support of Farage and the Brexit bong, lauding their right to celebrate after three years of struggling to finally get Brexit done.

I don’t care if it’s petty but I want Big Ben to bong on January 31st. After how long we’ve had to wait, I think it’s the least we deserve 🤷🏼‍♀️

I totally agree. If there’s any group of voters in this country that deserve celebrations, after three and a half years of being told they’re thick, braindead, bigoted morons by the media, political and legal class in this country, it’s Brexiteers. God knows I’ll be celebrating! https://t.co/QkfVvlQZKK

​Some Brexiteers vocalised their plans to pop "English champagne" to meet the new chapter of British history.

I totally agree. If there’s any group of voters in this country that deserve celebrations, after three and a half years of being told they’re thick, braindead, bigoted morons by the media, political and legal class in this country, it’s Brexiteers. God knows I’ll be celebrating! https://t.co/QkfVvlQZKK

After authorities ruled out sounding the bell on 31 January for logistical reasons and cost, which is believed to be up to £1 million, Prime Minister Boris Johnson suggested a crowdfund which would need to raise the money within the next couple of weeks.

Speaking to BBC Breakfast on Tuesday Boris Johnson said the Government would be "working up a plan so people can bung a bob for a Big Ben bong".

Of the 24 appeals to sound the bell on GoFundMe, however, most have failed to gain traction, receiving little to zero donations, with the most successful campaign accumulating just £215 as of Wednesday morning.