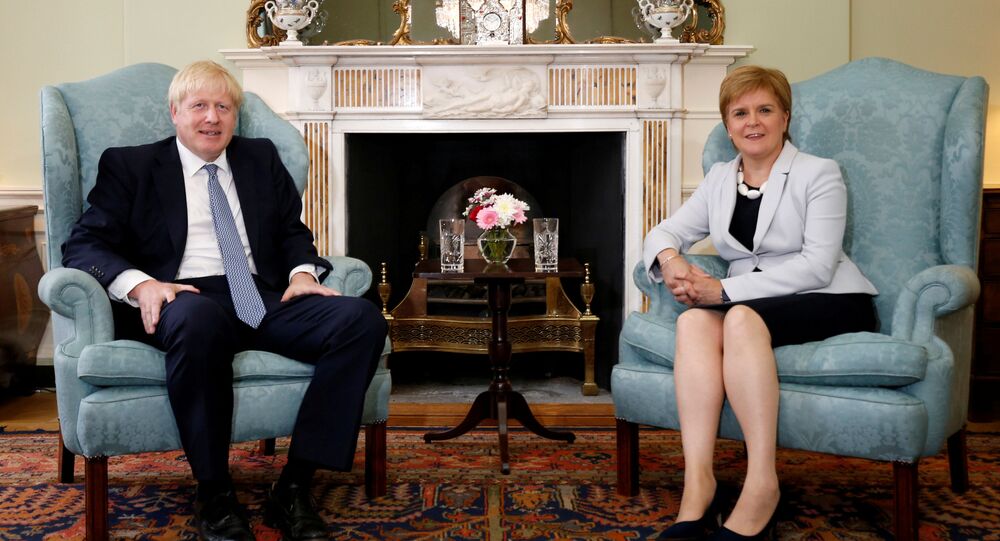 Earlier, Nicola Sturgeon, First Minister of Scotland and leader of the Scottish National Party stepped up the battle for an independence referendum, writing to UK Prime Minister Boris Johnson to request a second vote on the issue and seeking a transfer of powers to hold another vote from London to Edinburgh.

British Prime Minister Boris Johnson wrote to Scottish First Minister Nicola Sturgeon on Tuesday refusing her request to be given the powers to hold another Scottish independence referendum.

As he posted the letter on Twitter, he accompanied it with a caption that reads:

“Today I have written to Nicola Sturgeon. The Scottish people voted decisively to keep our United Kingdom together, a result which both the Scottish and UK Governments committed to respect. Let's make 2020 a year of growth and opportunity for the whole of the UK”.

Today I have written to Nicola Sturgeon. The Scottish people voted decisively to keep our United Kingdom together, a result which both the Scottish and UK Governments committed to respect.

Let's make 2020 a year of growth and opportunity for the whole of the UK 🇬🇧 pic.twitter.com/JjQp3X2J2n

​Currently, a referendum cannot take place without the consent of the UK government. On 19 December, in the wake of the UK elections where Johnson’s Conservative Party won a landslide in England, but performed poorly in Scotland, Sturgeon wrote to the Prime Minister, asking him to transfer the power to hold a referendum from London to Edinburgh.

"I cannot agree to any request for a transfer of power that would lead to further independence referendums," Johnson has responded.

The UK Prime Minister reminded Sturgeon she had agreed that the 2014 referendum, when Scots opted to remain in the United Kingdom, would be a "once in a generation" vote.

"Another independence referendum would continue the political stagnation that Scotland has seen for the last decade ... it is time that we all worked to bring the whole of the United Kingdom together," emphasised the British Prime Minister.

Nicola Sturgeon’s pro-independence Scottish National Party (SNP) won 48 of Scotland’s 59 parliamentary seats in December’s UK-wide election, which she contends showed overwhelming support for her agenda to bring about such a plebiscite.

“The question is often posed to me: “what will you do if Boris Johnson says no?” As I’ve said before, I will consider all reasonable options to secure Scotland’s right to self-determination,” Sturgeon said in December.

However, Nicola Sturgeon signalled at the time she did not envisage a Catalonia-style referendum, without consent or recognition by the national government.

© AP Photo / Scott Heppell
Scottish First Minister Nicola Sturgeon takes a photo with party members at the SEC Centre in Glasgow after the declaration in her constituency in the 2019 general election, Friday Dec. 13, 2019

“In line with our values, we acknowledge that a referendum must be legal and that it must be accepted as legitimate here in Scotland and the rest of the UK, as well as in the European Union, and the wider international community,” she said.

Back in the 2014 referendum Scots had rejected independence by 55 to 45 percent.

Johnson says the 2014 vote settled the independence question and it would be divisive and bad for the economy to re-open the argument.

Using Brexit as her main argument, Sturgeon maintains circumstances have changed since the 2014 vote, as a majority of Scots voted to remain in the European Union in a 2016 referendum, while the United Kingdom as a whole voted to leave.

Britain’s formal exit from the bloc is scheduled for 31 January.