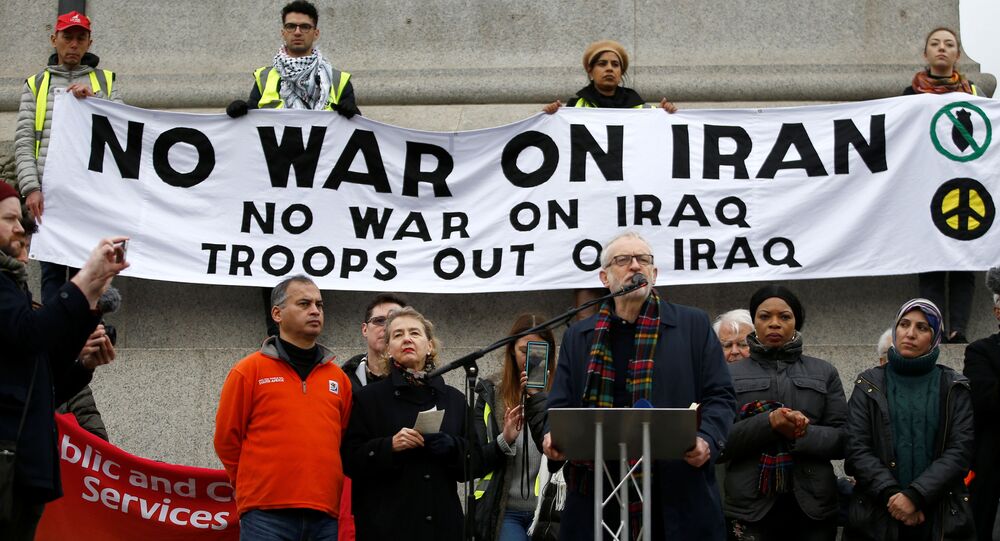 Outgoing Labour leader Jeremy Corbyn has compared the destruction of an airliner with 176 people on board near Tehran to the killing of Iranian Major General Qassem Soleimani in a US drone strike.

Addressing a pro-peace rally in London on Saturday, Corbyn said: “Today let's recognise the horror that the families of those that died in the airliner travelling from Tehran to the Ukraine are suffering from now.”

He called the tragedy, which claimed the lives of all passengers and crew, an “appalling act and part of a wide pattern of appalling acts all across the region.”

“All this does is set off a spiral of violence and danger which will lead us to yet more wars in the future.”

Corbyn, who led his party last month to its worst election defeat since 1935, urged the British government to “pause for a moment, take stock and stop pumping British arms in every conflict in the region”.

He also pledged to hold Prime Minister Boris Johnson “and his unconditional support of the US” accountable.

What happened in Iran?

Corbyn spoke hours after Iran acknowledged that it had unintentionally shot down a Ukrainian International Airlines flight, which crashed near Tehran on 8 January, killing all 176 people on board, including 82 Iranians, 63 Canadians (mostly of Iranian ethnic origin) and 11 Ukrainians (including the nine crew members).

Iranian authorities said the plane was shot down by the Islamic Revolutionary Guard Corps, which were on high alert as tensions flared with the United States. While calling the plane’s downing “human error”, Iran’s President Rouhani still said that “US adventurism” is to blame for it. Iran is cooperating with Ukraine’s investigation into the crash.

It occurred just hours after Iran struck two Iraqi bases that host American troops. The ballistic missile strikes caused no casualties, as Iran gave Iraq advance warning, which was passed on to the United States.

They came in response to the killing of Iranian Major General Qassem Soleimani in a US drone strike just outside of Baghdad, Iraq, on 3 January. The assassination – followed by threats of war crimes from Donald Trump – led to outrage and legislative action against US-led coalition forces in Iraq and acted as the final trigger for Iran to completely roll back its nuclear commitments.