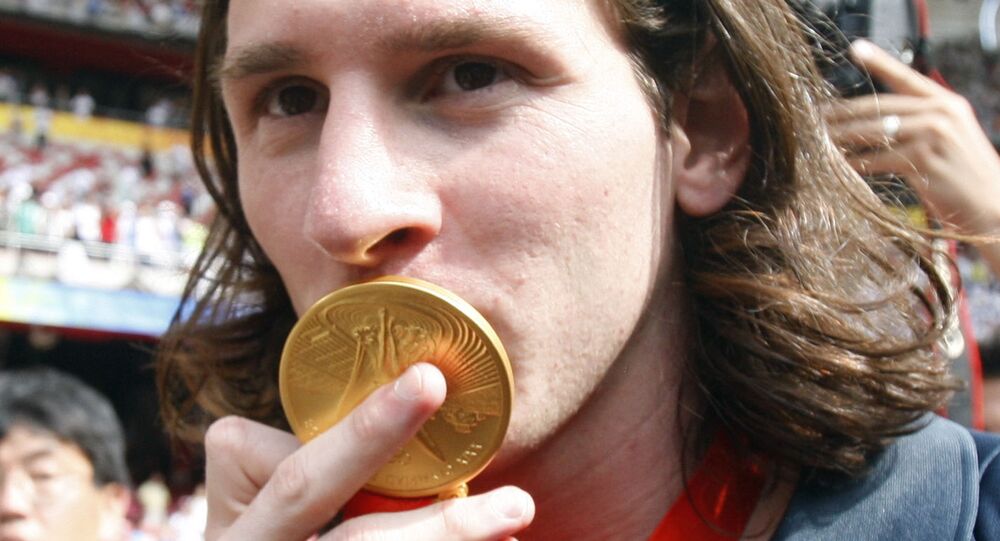 From Lionel Messi, Sergio Aguero to Neymar: Superstars Who Have Won an Olympic Gold Medal

Long before Barcelona captain Lionel Messi won his maiden trophy with the Catalan giants, he made his name at the Beijing Olympic Games in 2008. The then 21-year-old played a major role in Argentina's gold medal winning effort, scoring two goals during the competition.

Several big names from the world of football, including current Argentina skipper Lionel Messi, Paris Saint-Germain (PSG) striker Neymar and former Manchester City forward Sergio Aguero have not only participated in the Olympics during the initial stages of their careers, but have won gold medals as well.

Even though football has been part of the Olympic Games since 1900, it is not played at the senior level because FIFA's rules only allow countries to send their U-23 players to the event, making it a youth tournament. Only three players aged over 23 are allowed to be included on each team.

The U-23 rule came into force during the Barcelona Olympics in 1992. The biggest reason behind FIFA's decision to convert the Olympics into a U-23 tournament was to avoid a direct clash between the World Cup and the Olympics.

As FIFA wanted the World Cup to be the showpiece event or the biggest football tournament in the world, it introduced the U-23 rule for the Olympics.

Global football icon Messi, his Barcelona teammate Aguero and PSG midfielder Angel Di Maria played their parts wonderfully well in 2008, while leading Argentina to their second successive gold medal at the quadrennial sports extravaganza in China. Argentina had also claimed the gold medal at the 2004 Olympics in Athens.

"The @Olympics gold in 2008 is the win that I value the most!" Happy Birthday, Messi​! #L30Messi @FCBarcelona @PrensaCOA @FIFAWorldCup pic.twitter.com/zdxzNDZwDL

​Messi led Argentina's charge in Beijing, scoring the first goal for his team in their Group clash against Ivory Coast, before providing the crucial assist to Lautaro Acosta to secure a 2-1 win for his nation.

In the quarterfinals, Messi possibly scored one of the finest goals ever made in the Olympics as he went past the Dutch defense line, before bamboozling the rival goalkeeper with a deft touch at the net. Despite the Netherlands equalising in the 36th minute, Messi once again rescued Argentina as he teamed up with Angel Di Maria to see Argentina through in extra-time.

While Messi's contributions were vital for Argentina's passage through to the semis, it was Aguero who turned out to be their hero against the Brazilians. Leading his side's assault against the seemingly invincible Brazil, as it featured the likes of Marcelo, Alexandre Pato, Thiago Silva, Rafinha and Ronaldinho, Aguero scored a brace, while Juan Riquelme scored a penalty to send them into the final.

In the gold medal match, Messi and his teammates were up against Nigeria, a team which had become famous for its world-class defence. However, Di Maria managed to break their fortress with a bit of magic from Messi.

As the clock was about to tick the hour mark, Messi produced a brilliant pass to Di Maria, who wasted little time in taking control of the ball before delivering the winner for Argentina.

Former Indian midfielder Syed Rahim Nabi called Messi's gold medal triumph with the Argentine national team in Beijing as one of the biggest highlights of his career.

"Till recently, Messi had nothing to show on his CV as far as international silverware is concerned, except the gold medal at the Olympics. It was possibly his most cherished possession before winning the Copa America title just about 10 days ago", Nabi told Sputnik on Monday.

"Regardless of whether or not Messi wins a FIFA World Cup trophy in his career, the Olympic gold will always remain one of the most defining moments of his career", he added.

Neymar finally ended Brazil's long wait for an Olympic gold medal at their home Olympics in Rio in 2016. Captaining Brazil in the tournament, Neymar turned out to be the player of the competition.

While Man City forward Gabriel Jesus and PSG defender Marquinhos played an integral role in Brazil's success at the Olympics, scoring a brace and a goal respectively at the sports mega-event, it was Neymar who was perhaps the biggest inspiration behind their gold medal-winning heroics in Rio.

Neymar played in beast mode throughout the Olympics, scoring his first goal in Brazil's spectacular 4-0 win over Denmark during the Group stage. Neymar followed it up with a majestic free-kick goal against Colombia in the quarters, taking his home team into the semis with a comfortable 2-0 victory.

In the semifinal clash against Honduras, Neymar scored twice, including the fastest goal ever scored in Olympics history.

.@neymarjr's goal was the fastest in Olympic #Football history (and only 5.42 seconds slower than @usainbolt 😜) pic.twitter.com/SMDhmULUSC

​His goal inside the first 15 seconds of the match allowed Brazil to not only dominate the proceedings but also humiliate the opposition, leading them to a 6-0 triumph before they took their revenge on Germany in the final.

Germany had handed Brazil a 7-1 annihilation in the 2014 FIFA World Cup semis, their biggest loss since 1920 and the Brazilians, including Neymar, were up for the challenge in the gold medal contest.

While Neymar opened his country's scoring with a 27th minute goal, Germany fought back to level the match at 1-1 at the end of normal time. Both teams failed to score in extra-time and eventually the game moved into a penalty shootout, where Neymar scored the winning penalty to give his country its first-ever gold medal in men's football at the Olympics.

Other prominent footballers who have won a gold medal at the Olympics are current managers and former Spain internationals Luis Enrique and Pep Guardiola, both in 1992.