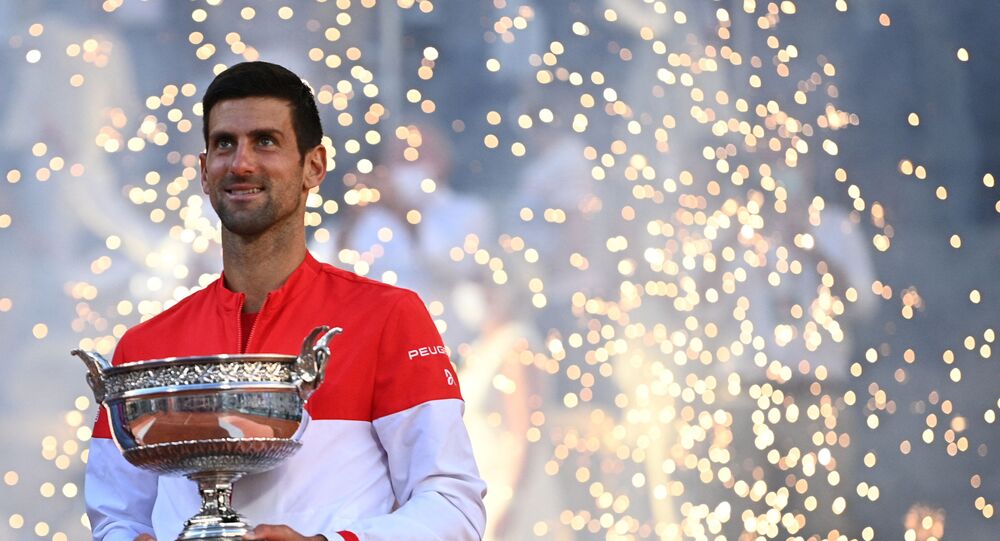 Novak Djokovic Confirms He Will Compete in Tokyo Olympics, And Why Winning Gold Matters to Him

In a bid to become the first man in tennis history to claim a 'Golden Slam', top-ranked Novak Djokovic will participate in his fourth Olympics this summer. His previous appearances have been in Beijing, London and Rio de Janeiro in 2008, 2012 and 2016 respectively. The Serbian clinched the bronze medal in the men's singles 13 years ago in China.

World No. 1 and reigning Wimbledon champion, Novak Djokovic, has confirmed that he will be representing his country, Serbia, at this summer's Olympic Games in Tokyo.

​"With much pride I'm packing for Tokyo and joining our national team in the fight for the brightest medals at the Olympic arenas. For me, playing for Serbia was always a special joy and motivation and I will give my best to make us all happy. Let's go," the 34-year-old said in a statement.

​Djokovic's arch-rivals Roger Federer and Rafael Nadal have already pulled out of the Games, citing a knee injury and fatigue respectively.

Apart from Federer and Nadal, the men's field in Tokyo has been relatively weakened by the withdrawal of US Open champion, Dominic Thiem of Austria, and former World No. 3 Juan Martin Del Potro of Argentina, who beat Djokovic in both London and Rio.

But the Serbian mega-star is expected to face some sort of competition as he seeks the top honour in Japan from the likes of two-time defending Olympic champion Andy Murray and the second-ranked Daniil Medvedev, who is set to make his debut at the sports event.

According to legends of the game, including three-time French Open champion Mats Wilander and former Women's No. 1 Billie Jean King, Djokovic is the overwhelming favourite to win the 'Golden Slam' this year.

​A 'Golden Slam' in tennis means winning the four Majors - namely the Australian Open, Roland Garros, Wimbledon, the US Open - and the gold medal at the Olympics all in one year.

Only German icon Steffi Graf has achieved the feat, a milestone the 22-time Grand Slam winner achieved in 1988.

"I think Novak will win the Golden Slam this year, so he will get to 21," Wilander told British media after Djokovic's sixth Wimbledon title triumph on Sunday.

Former tennis player, Vishal Uppal, who represented India in the Davis Cup in 2000 and 2002, agreed with Wilander's and King's assessment that Djokovic is the frontrunner to bag both the Olympic gold and the Golden Slam this year.

"Djokovic seems invincible right now and is playing at a much higher level than the others. He is the big favourite to win the Olympic gold in Tokyo," he told Sputnik on Friday.

"Why did Djokovic decide to play in the Olympics? Because he wants to complete the Golden Slam, which I believe he will accomplish at the US Open in September," he added.

Many fans also echoed these sentiments after hearing that Djokovic would participate in the Tokyo Olympics. A few of them think Djokovic will not only achieve the Golden Slam, but could possibly secure the 'Super Slam' this year.

I am now rooting for Novak Djokovic to get the Golden Slam. Our game needs this to happen. Good luck @DjokerNole #TruthandTennis

​A 'Super Slam' can only be accomplished by bagging all four Grand Slams, an Olympic gold and the year-ending ATP Tour Finals in Turin.

A gold medal at the Olympics is critical for Djokovic because without winning it, he will not be able to match Graf's golden feat.

Moreover, he would not like to win gold in Tokyo simply to secure the Golden Slam, but because he is immensely proud of his Serbian roots and wishes to be a credit to his country.