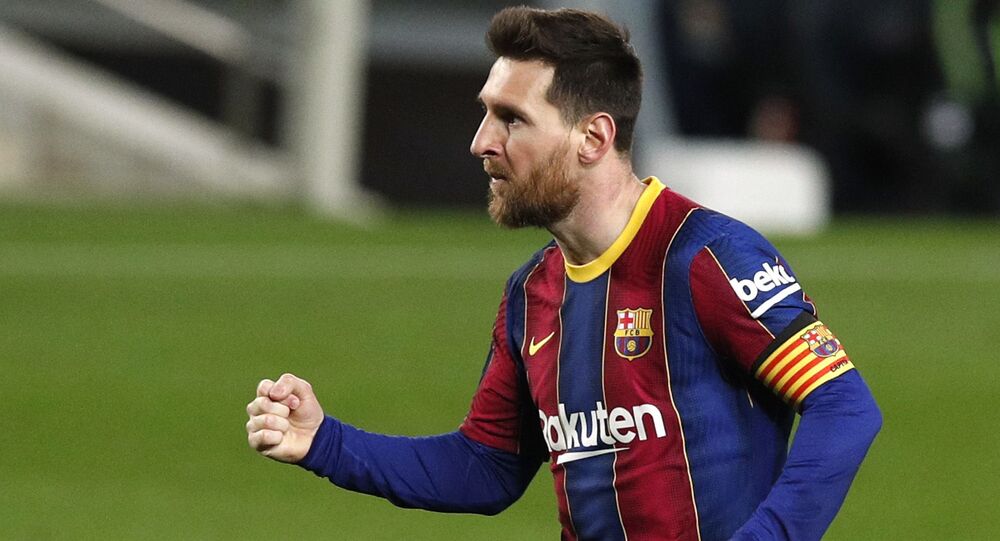 Messi Takes 50 Percent Salary Cut at Barca: Where Does He Stand Among Highest-Paid Footballers Now?

Lionel Messi joined Barcelona as a 13-year-old in 2000 and earned a world record 34 trophies with the club, including 10 La Liga titles, seven Copa del Rey trophies, and four UEFA Champions Leagues. But the 34-year-old became a free agent after his contract with Barca expired on 30 June 2021.

Football mega star Lionel Messi is set to sign a new five-year contract with his club of 21 years – Barcelona. He has agreed to take a significant 50 percent salary cut, according to the terms agreed upon between the Argentine and the Catalan giants, multiple media reports said on Wednesday.

But after the La Liga side slashed his wage bill by 50 percent, will he still be the top-earning footballer on the planet?

Earlier, Messi had a 4-year deal at Camp Nou, which saw him earn over $650 million and approximately $150 million per annum, making him the highest-paid footballer in the world.

Messi's previous contract with Barcelona is also believed to be the biggest deal in any sport, let alone in football.

However, the Argentine, who earned a staggering $2.9 million every week from 2016-2021, will now earn a little over half of what he earned during his last deal with Barcelona.

Although the 50 percent wage cut will make a significant impact on what Messi earns in a week, he will still be the highest-paid footballer in the world because his previous salary at Barcelona was more than double of what Cristiano Ronaldo earned at Juventus.

His arch-rival Ronaldo, who earns a hefty $1.25 million per week at Serie A club Juventus, will remain in second place on the coveted list of the top-paid footballers on the planet.

As per football website Goal.com, Messi's weekly salary is set to be around $1.45 million after the cut, which would include his image rights, bonuses, allowances and other variables, making him the highest-paid footballer ahead of CR7.

Following the Portugal captain in third place is the Brazilian Neymar who earns a mammoth $840,000 at PSG.

Messi's great friend and ex-Barcelona teammate Luis Suarez, who has now shifted to Atletico Madrid is fourth, with earnings of $800,000 per week.

Another Barcelona star Antoine Griezmann currently occupies the fifth spot with a weekly salary of $800,000. But the Frenchman is set to be offloaded from the squad as the club is working on a potential swap deal with Atletico Madrid, who are interested in exchanging Greizmann for Saul Niguez.

While he may have taken a pay cut, Messi is still regarded as one of the best players in the world and arguably the greatest of all time.

And even though the likes of Manchester City and Paris Saint-Germain (PSG) showed keen interest in signing him, Messi remained committed to Barcelona.

PSG was particularly interested in signing a deal with him as it would have reunited him with one of his closest friends and ex-Barca teammate Neymar. But Messi turned the proposal down, several football websites reported on Thursday.

Ex-Indian midfielder Syed Rahim Nabi claimed that Messi's love and commitment for Barcelona forced him to take an incredible 50 percent cut in his salary.

"A 50 percent salary cut! Just for Barcelona. In my opinion, Messi has done this because he loves the club from the bottom of his heart", Nabi told Sputnik on Friday. "Camp Nou is the place that has given Messi everything and when the time came to return the favour, he did it without giving a second thought", Nabi added.

Last week, Messi ended his long wait for an international trophy after he led Argentina to the Copa America title against Brazil.

He was also named the best player of the iconic South American tournament for his superb performance in Brazil.

With his four goals, Messi was not just the highest goal-scorer in the world's oldest international football competition, he was also the top playmaker with five assists.

Yet, the biggest testimony to his consistency in 2020 was his status of being the frontrunner to claim a record seventh Ballon d'Or in December, when FIFA traditionally hosts the ceremony to award the best footballer of the year for his on-field performance during a season.

Top Five Highest-Paid Footballers in the World (Salary per week)