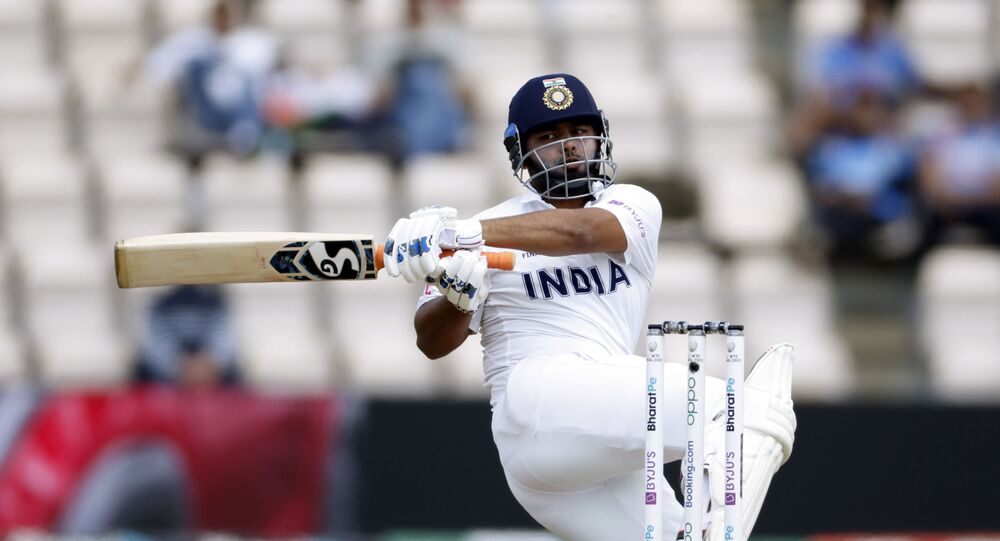 Rishabh Pant is not the first Indian cricketer to have tested positive for the highly infectious virus. Last year, ex-India skipper and legendary batsman Sachin Tendulkar contracted COVID-19 before recovering after a brief period of hospitalisation.

Star Indian cricketer Rishabh Pant has tested positive for the coronavirus in England and is staying at a relative's place in London, where he is serving his quarantine period.

According to multiple media reports, the southpaw underwent a coronavirus test after experiencing a sore throat that came out positive earlier this week.

The Indian team management immediately took preventive measures as the support staff and his teammates, who were in close contact with him, were asked to stay in isolation for three days.

All of them have returned negative tests after they were tested twice during their isolation.

The young wicketkeeper-batsman, known for his aggressive style of play, is set to miss India's tour game against Select County XI, scheduled to take place in Durham from 20 July.

The Virat Kohli-led side was on a brief holiday in England after their ICC World Test Championship final debacle against New Zealand, where they lost by eight wickets.

Captain Kohli and his team will rejoin the secure bio-bubble in Durham on Thursday. But Pant will not be a part of it as he is in home isolation in the British capital.

Pant has tasted a lot of success in the last one year and his match-winning unbeaten knock of 89 in the fourth Test against Australia in Brisbane was one of the biggest highlights of his nascent career.

His innings powered the Indian cricket team to a second successive Test series win in Australia, a feat no team had ever achieved in the past.

According to former India batsman Ajay Sharma, Pant's positive test is a big blow to the team.

"Pant has been a prolific run scorer for India in recent times. Also, he has made runs in England in the past, so certainly it is a setback for the Indian team", he told Sputnik on Thursday.

"If Pant is unable to play the first Test next month, he will feel extremely disappointed because he loves to bat in England and even made his first Test hundred in the country", he added.

On the other hand, Pant's careless attitude, where he was seen attending Euro 2020 matches without a mask during his stay in the United Kingdom, has been heavily criticised on social media.

While a few fans posted sympathetic messages, praying for his speedy recovery, there were others who slammed him for flouting COVID-19 rules, despite a surge of infections in England.

When coach was leading from the Front, what would you expect from players ? No Mask in a crowded stadium like there's no Covid in UK 🤦#RishabhPant #TeamIndia #INDvsEng pic.twitter.com/fpyiSaHnBJ

The news of Pant's positive test comes days after the deadly virus swept through the England camp, infecting three players and four staff members, ahead of their One-Day Internationals (ODI) series against Pakistan.

The development created an awkward situation for England, as their cricket board was forced to announce a completely new squad, with all-rounder Ben Stokes being named the captain for their series against the Asian side.

However, the changes in the team didn't have a major impact on the outcome, as England whitewashed Pakistan 3-0 in the ODI series.