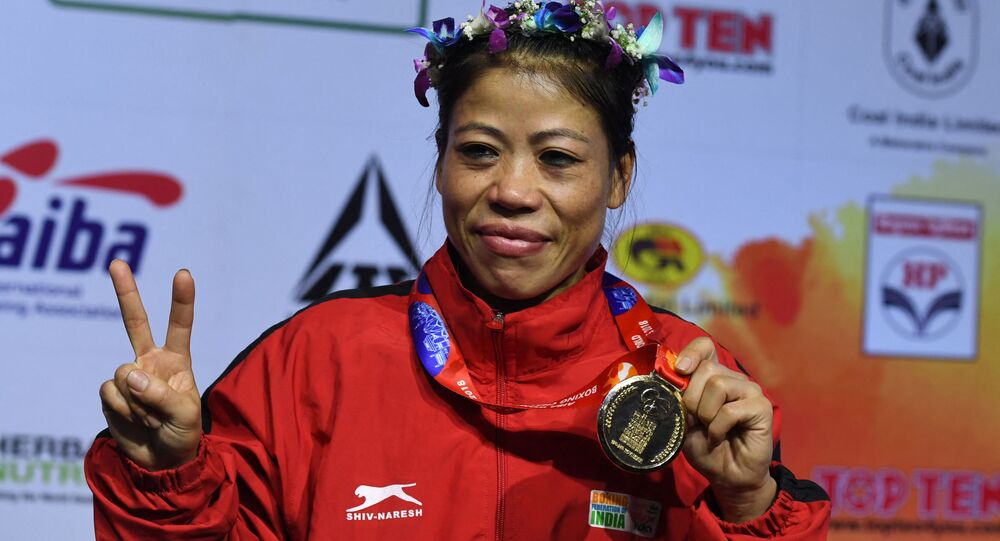 'Because I Am a Southpaw…': Top Indian Woman Boxer's Reply to PM Modi Winning the Internet

Mangte Chungneijang Mary Kom, popularly called Mary Kom, is the only female to win the World Boxing Championships six times. The 38-year-old will be one of the flag bearers for India at the upcoming Tokyo Olympics, which are scheduled to be held behind closed doors from 23 July to 8 August.

Ahead of the Indian delegation's departure to Tokyo for the Olympic Games, Prime Minister Modi was holding an online interaction with athletes when he curiously asked Mary Kom: "You are a champion of every punch you throw. However, which is your favourite punch? Is it a jab, a hook, an uppercut or some other move? Do tell us and also why is it your favourite punch?"

The bronze medalist from the London Olympics promptly replied: "Because I am a southpaw, the hook punch is my favourite. It's a very effective move as I rarely miss my opponent with this punch. It is almost certain to hit them".

Her response to the prime minister's query was praised on social media, while a few fans came out with their own versions of their favourite punch.

I think the apt answer would be "IN YOUR FACE"

Hearing that, Yogi Adityanath renamed Muhammad Ali to "Swami Mohammadananda Rum". Now he is authorised to be the icon for MC Mary Kom.

Best wishes dearest Mary kom!! God be with you and your family!! #Cheer4India https://t.co/OvBCrG6Ymo

​"I want to know who is your favourite athlete", the PM asked her while carrying on the conversation with the boxing superstar.

"In boxing I have my hero, my inspiration, Muhammad Ali. I got inspiration from him to choose boxing as a profession", she answered.

"Mary Kom, you have won almost every boxing tournament in the world. You had once said it's your dream to win an Olympic gold medal. This isn't just your dream but also of the country", Prime Minister Modi stated. "The country expects that you will fulfill your dreams and the dreams of the country".

In 2012, Mary Kom made history by becoming the first female boxer ever to claim a medal at the Olympics, a feat she achieved in London. She is now aiming to win a gold medal in what will be her last Olympics.

"I have won all the medals that are there but I won't be satisfied until I win that Olympic gold", she said in an online media briefing earlier this week. "That elusive medal gives me the drive and strength to keep training, working hard and just keep going day by day", she added.

According to Mahavir Singh, national coach of India's women's boxing team, Mary Kom has trained exceptionally well in the past few years and that's why he is confident about her chances of standing on top of the podium in Tokyo.

"Mary Kom's biggest strength is her determination and not only she looks ready and hungry, but extremely focused to win a gold medal in Tokyo", Singh told Sputnik on Wednesday.