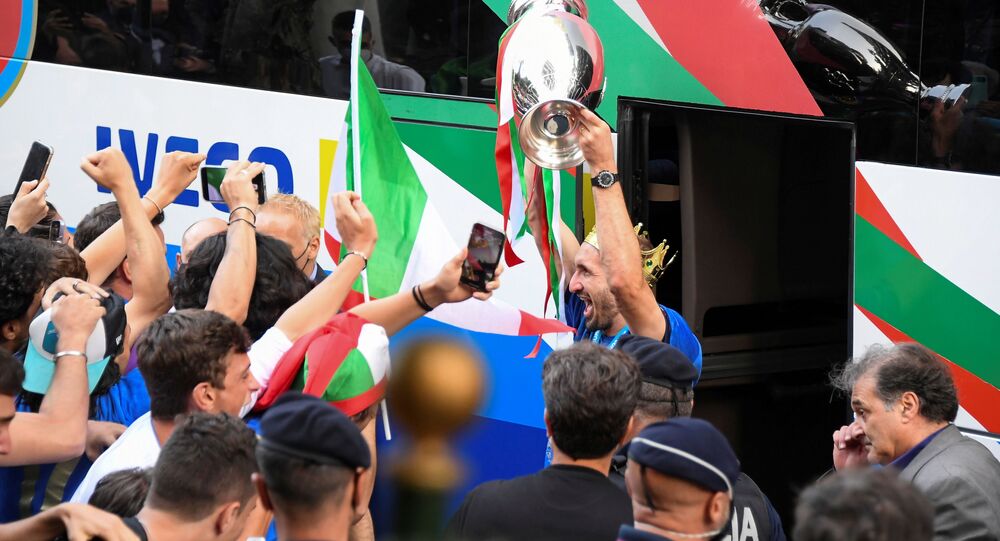 England's long wait for a major football trophy ended in defeat at the hands of Italy after the Three Lions suffered a heartbreaking 3-2 loss on penalties in the Euro 2020 final on Sunday. England last won an international title way back in 1966 when they captured their lone FIFA World Cup crown.

Italian captain Giorgio Chiellini has revealed that he "cursed" England forward Bukayo Saka minutes before the 19-year-old's penalty was saved by their goalkeeper Gianluigi Donnarumma, powering Roberto Mancini's side to their first European Championship title since 1968.

Saka needed to deliver a goal to give England the victory in front of their home fans at Wembley stadium, but his spot kick was saved by the Italian goalkeeper.

A night of ecstasy turned into a night of agony for the English players, especially for Saka as the teenager became a villain overnight.

Saka's failed penalty attempt came after both teams failed to break the deadlock in the 90 minutes of normal time and the subsequent 30 minutes of extra-time, with the match remaining tied at 1-1.

Video footage has now emerged, where Chiellini is seen shouting something at the English striker moments before he is preparing to take his penalty shot.

The word Chiellini screamed at Saka was "Kiricocho!" - a phrase used by footballers from around the world for several decades to bring bad luck to their rivals.

When Chiellini was asked by the Italian media whether he cursed Saka or not, he responded in the affirmative, confirming that he did utter the word just before Saka took the decisive penalty.

"Hello Christian, I confirm everything! Kiricocho!", the Italy captain said on Tuesday.

A video posted by UEFA on their Twitter handle also shows Chiellini shouting "Kiricocho" just before Saka's penalty, that was ultimately saved by Donnarumma to hand Italy their historic win over England.

According to a legend, Juan Carlos "Kiricocho", or Quiricocho was a huge fan of the Argentine club Estudiantes de la Plata.

The fan's passion and dedication to the club was such that he even attended their training sessions during the 1980s.

But Estudiantes head coach Carlos Bilardo noticed that whenever Kiricocho was present during his team's training sessions or matches, his players used to get injured.

Legend of 'Kiricocho' sneaked into the Euro 2020 final. Giorgio Chiellini says he uttered it as Bukayo Saka stepped up to shoot pic.twitter.com/kirIkjAXYU

Bilardo, who kept a close watch on Kiricocho's activities at the club, told him about the mysterious circumstances in which his players were getting sick or injured and asked him to direct his "curse" towards Estudiantes' opponents.

Kiricocho accepted Bilardo's suggestion and started attending matches of other teams and his presence did hurt Estudiantes' rivals in the Argentine league.

"Kiricocho was a kid from La Plata who was always with us, and since that year we were champions (in 1982), we adopted him as our mascot", Bilardo once said, acknowledging his role in their success.

"He was a good kid but then I didn't see him again. The last time I was coaching Estudiantes (in 2003-04) I asked after him and nobody knew anything".

Ever since footballers from all over the world have come to know about the legend of Kiricocho, they have been using the phrase to curse their rivals on a regular basis.

Former Indian footballer Mehtab Hossain, who also played for the Kerala Blasters in the Indian Super League (ISL), claimed that he knew about the misfortune attached to the word Kiricocho.

"During my time at the Kerala Blasters, I played with a number of foreign players, who told me about it. Thanks to the ISL, most Indian footballers are now aware of the Kiricocho curse", he said.