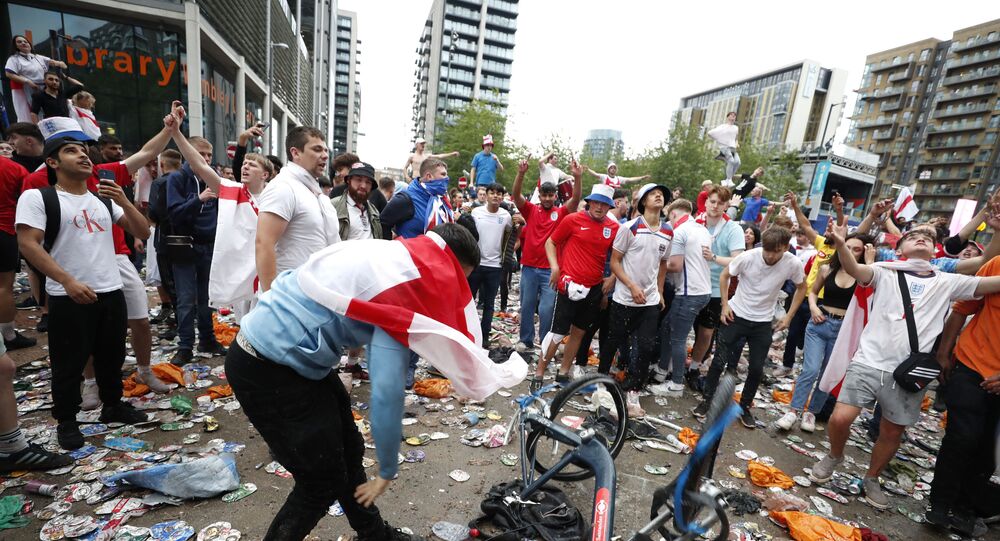 England lost on penalties to Italy on Sunday after the Euro 2020 final went to extra time with the score 1-1. It was the first time England had been in the final of a major tournament since the World Cup in 1966.

UEFA has launched an investigation into the events at Sunday's Euro 2020 final between England and Italy when dozens of ticketless fans broke into Wembley stadium after overcoming stewards.

England's Football Association has also been charged by UEFA, which has launched disciplinary proceedings into disturbances during the game.

Our policing operation for the #Euro2020 final is drawing to a close. Thank you to the tens of thousands of fans who had good spirits and behaved responsibly.

We made 49 arrests during the day for a variety of offences. We will have officers on hand throughout the night.

​The FA faces four charges, including the booing of the Italian national anthem, the throwing of objects at the end of the match, the lighting of fireworks inside the stadium, and an incursion onto the pitch during the game.

UEFA said it was investigating "events involving supporters which occurred inside and around the stadium".

FA chief executive Mark Bullingham has already apologised to those affected by Sunday's incidents and said the security team had "never seen anything like it".

The FA is conduct its own review and said a "large number of drunken yobs" had forced their way into Wembley without tickets.

​The Metropolitan Police made 49 arrests in and around the stadium and elsewhere in London and said 19 officers had been injured on the night.

UEFA said: "The case will be dealt with by the UEFA Control, Ethics and Disciplinary Body in due course".

Last week, the FA was fined 30,000 euros after a laser pen was shone at Denmark goalkeeper Kasper Schmeichel as he prepared for Harry Kane's penalty during the Euro 2020 semifinal.

The FA was also charged after the Danish national anthem was booed and fireworks were set off during the semifinal.