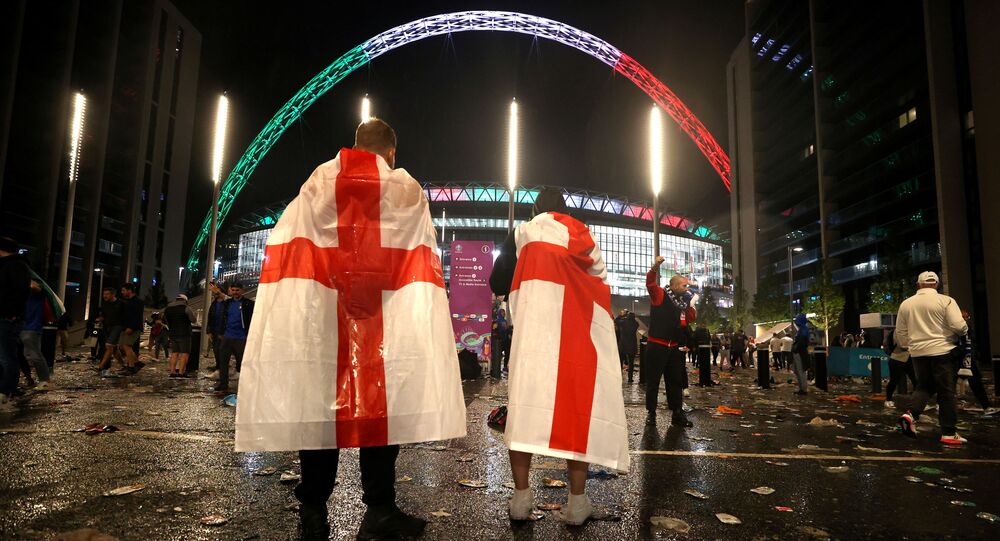 Marcus Rashford, Bukayo Saka, and Jadon Sancho took the blame as England were beaten by Italy on penalties in Sunday's Euro 2020 final. But could this young England come back stronger and win an even greater prize next year in Qatar?

Italy are the champions of Europe for the first time since 1968 after beating England in a dramatic game on Sunday night but time could be on the side of Gareth Southgate's squad.

Next year, the World Cup will be taking place in the desert emirate of Qatar and because of the extreme temperatures in high summer the tournament will take place between 21 November and 18 December 2022.

By then Italy's centre backs Giorgio Chiellini and Leonardo Bonucci - who were superb during Euro 2020 - will be 38 and 35 and may have retired.

England on the other hand had a young and inexperienced squad who will arguably only get better in the next 18 months.

Bukayo Saka, who missed the crucial penalty on Sunday, is only 19 and has a long career ahead of him.

Talented defender Ben White - who could not even get into the England team - is only 23 and is on the verge of a £50 million move from Brighton to Arsenal.

England's oldest player at Euro 2020 was right back Kyle Walker, who is 31.

Mancini has turned Italian football from its usual defensive strategy to a more confident offensive one. In less than 3 yrs, he took a team unable to qualify for the 2018 World Cup to winnng #EURO2020

A wonderful story of leadership that will continue at #WorldCup2022 in #Qatar. pic.twitter.com/xiNjkSfbZc

​Although Walker was one of England's star players - making it into the UEFA Team of the Tournament - he may be edged out by next year by Reece James, who helped Chelsea win the Champions' League in May.

Asked about the World Cup, Southgate told Sky: "I want to take the team to Qatar, I feel we have made progress over the four years, we have had a fourth, a third and a second-placed finish and that is as good as anyone".

Bookmakers have made England the 7-1 third favourites for the 2022 World Cup with Italy at 10-1, possibly because of their ageing defence.

Now I’ve had time to reflect on the result, I realise what an incredible achievement this was!
World Cup semi final#Euro2020 final
Next stop Qatar!!!
These young lions are making us all fall in love with the @England team again #eng 🏴󠁧󠁢󠁥󠁮󠁧󠁿🏴󠁧󠁢󠁥󠁮󠁧󠁿🏴󠁧󠁢󠁥󠁮󠁧󠁿🏴󠁧󠁢󠁥󠁮󠁧󠁿 #ThreeLions

​Brazil are surprisingly the 11-2 favourites, despite losing the Copa America to their arch-rivals Argentina over the weekend.

France - who were knocked out of Euro 2020 by Switzerland on penalties - are 6-1 and Spain are 8-1 with Messi's Argentina at surprisingly long odds of 12-1.

Messi will be 35 in Qatar and it will definitely be his last chance of gaining greatness on the world stage.

Although he has won six Ballon d'Or trophies and broken numerous records while playing for Barcelona, he has never won a World Cup with Argentina and it is for that reason that he is not regarded in his home country on the same level as Diego Maradona, who won it in 1986 and got to the final in 1990.

But Messi broke his international duck on Saturday, 10 July, when he helped Argentina win the Copa America.

The 1-0 win against Brazil in Rio de Janeiro was the first time Argentina had won the South American equivalent of the Euros for 28 years.

The winning goal was scored by Paris St Germain's Angel di Maria, 33, but arguably the man of the match was 27-year-old Rodrigo De Paul, who moved to Atletico Madrid on Tuesday, 12 July, for 35 million euros.

Gutted for @BukayoSaka87 you was fantastic in the tournament. Another positive tournament. Roll on The World Cup in Qatar

​So far, only the hosts, Qatar, have qualified for next year's World Cup.

Brazil and Argentina are at the top of the CONMEBOL qualification table, with Ecuador and Uruguay taking the two other places.

In Asia, the world's most populous nation, China, will be desperate to qualify from Group B but they will have to beat Japan, Australia, and Saudi Arabia who all have better World Cup pedigrees.

CEO of the FIFA World Cup Qatar 2022 said that the upcoming FIFA World Cup will bring the region together and be a moment of pride in the history of the world, looking forward to Qatar's hosting of exceptional event in the Middle East and Arab world. #QNA