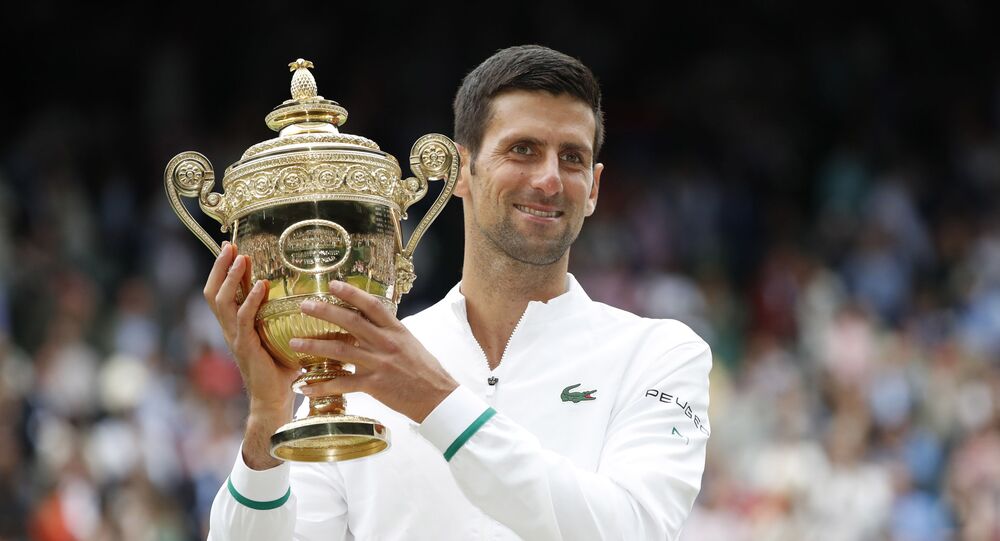 World No. 1 Novak Djokovic is the first men's tennis player in 52 years to win the Australian Open, Roland Garros, and Wimbledon in succession. Australian legend Rod Laver was the last to achieve the feat back in 1969, when he became the first man to win the Calendar Slam in the Open Era.

Former World No. 1 and three-time Wimbledon champion John McEnroe has made a prediction about the number of Grand Slams that Serbian superstar Novak Djokovic might win during his illustrious career.

According to the American legend and tennis commentator, it will be a "major surprise" if Djokovic fails to secure at least 25 Grand Slam titles, surpassing former Women's No. 1 Margaret Court's all-time record of 24 Grand Slam titles.

Djokovic, who won his 20th Grand Slam crown at Wimbledon on Sunday after defeating Matteo Berrettini of Italy in four sets, is currently tied with Roger Federer and Rafael Nadal for the men's record. Both Nadal and Federer have won 20 Slams each.

Djokovic, who was under tremendous pressure at the start of the contest, came back from a set down to beat the dangerous Italian 6-7, 6-4, 6-4, 6-3, in a classic grass court duel which lasted three hours and 24 minutes.

Only three women are ahead of Djokovic at the moment - Steffi Graf (22), Serena Williams (23), and Court (24), and McEnroe believes Djokovic will become the all-time leader because he expects him to win at least five more Majors.

"Djokovic is playing better than he has ever played", McEnroe told British media on Monday.

"As far as the Grand Slam is concerned, I have quite clear ideas about how things will end. I believe that Roger Federer will never win a Grand Slam title again, he will certainly remain at 20, Rafael Nadal will win a maximum of one".

"While Djokovic can last on the circuit for another three or four years and I think he can win up to another five Grand Slams. This is my prediction even though it will all depend on the health of each player. If nothing sensational happens, I think Novak Djokovic will be the player with the most Grand Slam titles in history".

"Djokovic has put himself so far out in front of everyone in terms of his ability to embrace what he is doing - in terms of creating history - and being able to execute under a lot of stress", added McEnroe.

What Other Tennis Greats Think of Djokovic

Former World No. 1 and three-time French Open champion Mats Wilander agreed with McEnroe's assessment, as he believes Djokovic is going to make history in 2021 by winning all four Grand Slam titles. Also, the Swede is pretty confident about Djokovic's chances of surpassing Court's Grand Slam tally of 24.

"I think Novak wins the Golden Slam this year so he will get to 21", the Swede said.

"I think he will win another three next year and two or three the following year, so I think he ends up on 25 or 26".

On the other hand, 2001 Wimbledon champion Goran Ivanisevic, who is now Djokovic's head coach, thinks that the Serb could very well win 30 Grand Slam titles.

"Everything is possible. I'm not going to say it's 30 because it's a long way. But five, six, seven years ago we were talking about Federer, only about Federer. Now you have Nadal and him competing who is going to be the best ever", the Croat said at a post-match press conference after Djokovic's victory in Sunday's Wimbledon final.

How Roger Federer, Rafael Nadal, and Others Reacted to Novak's Historic Wimbledon Triumph

Swiss maestro Roger Federer, 13-time Roland Garros winner Rafael Nadal, and former Women's No. 1 Simona Halep have hailed Djokovic for his record-equalling feat. Meanwhile, there were a few others, who declared the 34-year-old as the greatest of all time (GOAT).

Congrats Novak on your 20th major. I'm proud to have the opportunity to play in a special era of tennis champions. Wonderful performance, well done!

Congrats @DjokerNole on this amazing achievement. 20 Grand Slam titles is huge and it is amazing that we are 3 players tied on this. Well done and, again, congrats to you and your team for this!@Wimbledon

He’s simply the best, and thrives on pressure. The Golden Slam is still in his sights.

​Serena Williams' coach Patrick Mouratoglou called him the most complete player of all time, who is now in the best possible position to be crowned as the GOAT.

Novak is the most complete player of all times. That enables him to find the solution to most of the problems on court and this, on every surface. It explains why he is now in the best position to become the GOAT.

"Djokovic seems invincible right now and is playing at a level much higher than the others. His mental and physical fitness is truly amazing", he told Sputnik on Tuesday.

But instead of Djokovic, Uppal picked Federer as the greatest ever.

"For me Roger Federer will always be the GOAT for what he has done for the world of tennis. He raised the bar so high which forced Nadal, Djokovic, Murray and all others to raise their levels", he added.

Fans Debate Whether Djokovic is the Greatest Ever

As soon as Djokovic completed a hat-trick of Wimbledon titles and bagged his sixth trophy on the hallowed Centre Court, fans started debating whether Djokovic was now the greatest.

Many argued in the Serb's favour, considering he has a winning record against both Federer and Nadal, has been ranked No. 1 for most weeks, has won all the Masters series events and all four Majors at least twice.

The undisputed GOAT & king of tennis. The silencer of hostile crowds & mental giant.

The award for Best Fan Sign this fortnight goes to... 🥁😂#Wimbledon pic.twitter.com/MdpvTI22qc