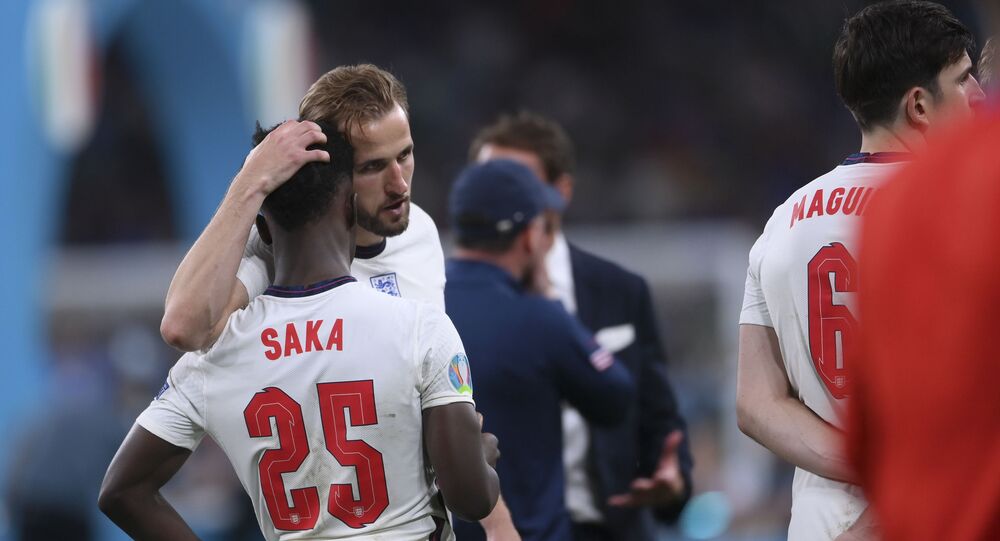 Marcus Rashford, Bukayo Saka and Jadon Sancho - who all had their spot-kicks saved by Italy goalkeeper Gianluigi Donnarumma - received racist abuse on social media on Sunday night. The missed penalties meant England were beaten by Italy in the Euro 2020 final, which ended 1-1 after extra time.

Mr Johnson tweeted in support of the beleaguered trio on Monday, 12 July, but Labour says he has not taken any action to combat such abuse, which has been going on for several years.

The Prime Minister has previously done no more than turned a blind eye to racism against our players.]

Warm words and gigantic England flags are no substitute for using the power he has, to make it stop. https://t.co/aO5g69qcYi

​Labour’s Shadow Secretary of State for Digital, Culture, Media and Sport, Jo Stevens, said: “The horrific racist abuse of the England penalty-takers had a disappointing inevitability to it. Twitter, Facebook and Instagram have the means to stop this hatred on their platforms and yet they decide to do nothing.”

She said the government's Online Harms Bill, which is going through Parliament, was  "a weak Bill which would do nothing to prevent this disgusting abuse from being published on social media."

I know that the whole @England team will be supporting each other and showing a special kind of love to @MarcusRashford @Sanchooo10 @BukayoSaka87. I'm so proud of our England team and @GarethSouthgate
🤗🏴󠁧󠁢󠁥󠁮󠁧󠁿

To the government Where's the online harms bill?

​Ms Stevens said if Labour got into government it would enforce criminal sanctions on senior executives with the big social media companies who fail to "enforce the rules."

“The Prime Minister has previously done no more than turned a blind eye to racism against our players. Warm words and gigantic England flags are no substitute for using the power he has, to make it stop,” she said, a reference to the giant cross of St George Johnson posed with outside 10 Downing Street last week.

State actors will manipulate what is happening today as further justification to securitise social media & online spaces wielding arbitrary definitions of hate. The Online Harms Bill entrenches state surveillance across online spaces, we shouldn't unwittingly give weight to it.