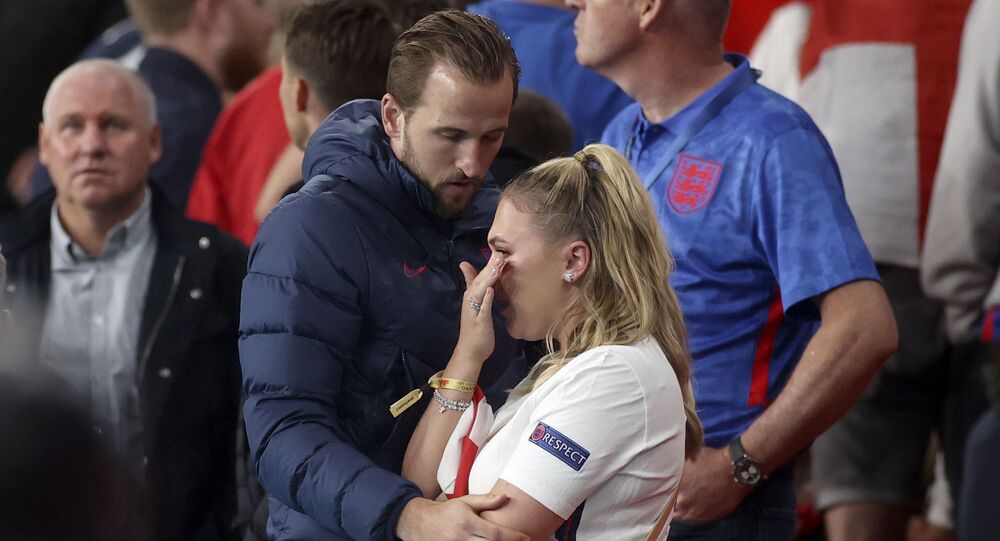 England has been overwhelmed with grief after its footballers missed out on being crowned champions in the Euro 2020 final on Sunday. This was the first time England appeared in the final for the European championships and victory seemed so tantalisingly close.

Grieving with the nation were those who are closest to the players of the England team – their spouses or partners.

England captain Harry Kane was seen consoling his wife Kate Kane at the end of the Euro 2020 soccer championship final match between England and Italy at Wembley stadium in London.

Kate covered her face and wept as her husband, the captain of the squad, embraced her after the game ended with bitter defeat for the home team.

Also present at Wembley was forward Raheem Sterling's fiancée, who shared a video of the couple’s children dancing at the stadium.

Despite the wishes of Fern Hawkins, Harry Maguire’s intended, the England team did not “bring [football] home.” The centre-back’s partner posted his photo at Wembley on her Instagram account before the match, saying it was the closest she’s been to him in five weeks.

© REUTERS / GUGLIELMO MANGIAPANE
From Festive Italian Boobs to English Hooligans Going Mad: Fans Meet Results of Euro 2020 Final
Photographs and messages shared by the partners of Italy's footballers were understandably much more upbeat, after the team advanced to victory in a penalty shoot-out against rivals England.

Carolina Bonistalli, who is married to Italian skipper Giorgio Chiellini, boasted with joy as she called Sunday a "magic night."

Thessa Lacovich, who is dating midfielder Manuel Locatelli, was left speechless with the outcome of the final. She shared a video of Locatelli chatting to her via a video call while wearing the golden medal and lying on the Wembley field after the game.

Italy snatched the title of champions from the England team after a tense game and a period of extra time, followed by a series of penalties.