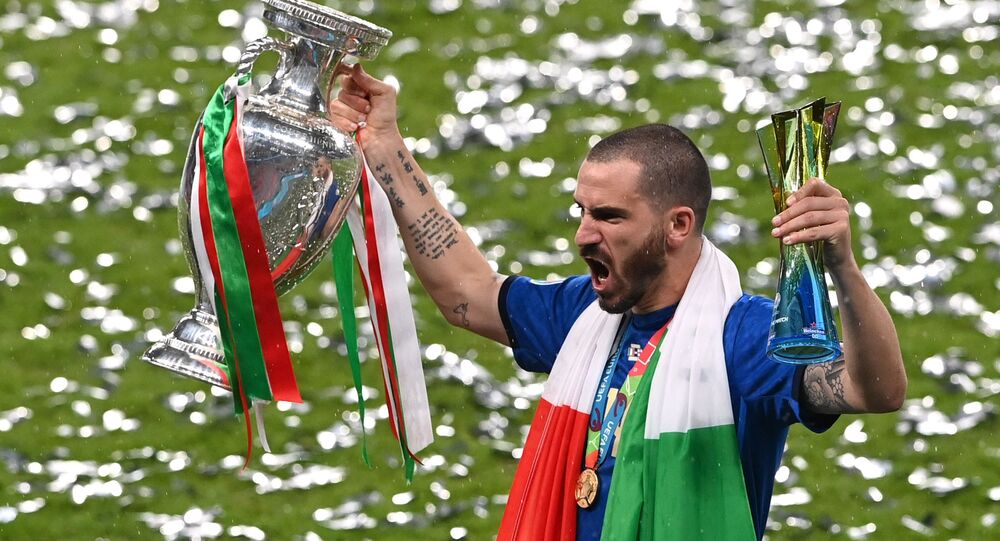 England failed to end their 55-year-old trophy drought at major tournaments after the home side lost their maiden European Championship final to Italy in London on Sunday. England last won an international title at the 1966 FIFA World Cup.

Italian centre-back Leonardo Bonucci has trolled English fans after his team stunned the home favourites 3-2 on penalties to win the Euro 2020 title at Wembley stadium in London.

While taking the lap of honour, Bonucci took a dig at England's fans as he shouted: "More pasta! We need to eat more pasta!"

​Later, the Juventus vice-captain took another jibe at the home team's fans as he shouted "It's coming to Rome."

You love to see it lmaopic.twitter.com/mVJka3HJ25

​His 'It's coming to Rome' slogan was in reference to the English fans' 'It's Coming Home' campaign, which they had used throughout the tournament in support of the Three Lions.

After mocking the English fans on multiple occasions, Bonucci revealed what winning their first Euro title since 1968 meant for him, his colleagues and the Italian fans.

"A historic goal is a dream come true and the credit goes to the coach, the whole squad," Bonucci said in his post-match press conference.

"When we got together in Sardinia, there was something different compared to the past. We slowly gained confidence, certainty, unity. This was the icing on the cake that makes us legends."

"It's a unique feeling and we are relishing it. Seeing 65,000 people leave before the trophy was handed out is something to relish, now the cup is coming to Rome. They thought it was staying in London, sorry for them, but Italy once again taught a lesson."

"We said during the warm-up, what was happening in the stands was purely just background noise. We had 34 games unbeaten, all we needed to do was exactly what we'd done so far to get here, not one bit more, not one bit less."

England got off to a flier in the final with Luke Shaw giving them a huge advantage with his second minute goal, but the Italians led by Bonucci managed to claw their way back in the contest with his equaliser in the 67th minute.

After Bonucci's strike the match stayed in the balance with neither team succeeding in scoring a goal in the ensuing 23 minutes of normal time and 30 minutes of extra-time.

Like at the beginning of the clash, Roberto Mancini's side trailed Gareth Southgate's team in the penalty shootout after both Harry Kane and Harry Maguire scored to give them a 2-1 lead.

But then the drama unfolded in front of thousands of home fans at the packed Wembley Stadium during the following three penalty strikes as England's Marcus Rashford, Jadon Sancho and Bukayo Saka failed to hit their targets.

While Rashford's shot at the goal hit the post, Jadon Sancho and Bukayo Saka's strikes were stopped by Italian goalkeeper Gianluigi Donnarumma to end England's dream of winning their first ever Euro title at home.

​Former Indian midfielder Syed Rahim Nabi, who had picked England as his pre-tournament favourites, was disappointed with their loss and slammed both Bonucci and the fans for trolling Kane and his men.

"England should have won the tournament, considering they had the crowd behind them. Had Gareth Southgate not taken the big gamble in the penalty shootout, they would have surely lifted the trophy at Wembley," Nabi told Sputnik on Monday.

"While they are being trolled everywhere, I believe they deserve much better from both their fans and the Italian players because they played like champions throughout the competition," he added.