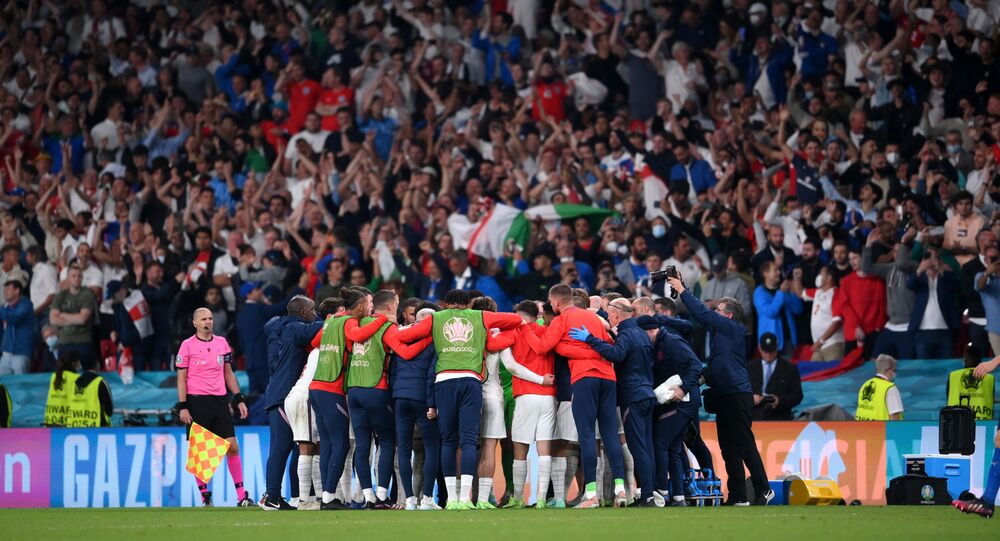 'Will Hurt for the Rest of Our Careers': Harry Kane on England's Euro 2020 Final Loss to Italy

England came close to winning their first major trophy since capturing their World Cup title in 1966. But they failed to cross the last hurdle, losing 3-2 on penalties to Italy in the Euro 2020 final at Wembley. Roberto Mancini' side was crowned as the European Champions for the first time in 53 years.

England captain Harry Kane has opened up about the mental scars England's Euro 2020 final defeat against Italy will have on his players.

The 27-year-old said the painful loss will haunt his men for the rest of their careers as he described Sunday night's heartbreak as "the worst feeling in the world".

Kane's reaction came after the home favourites were unable to take advantage of Luke Shaw's second minute goal which gave them a 1-0 lead in the final.

As the score remained 1-1 through the initial 90 minutes and the subsequent extra-time, the match went to a penalty shootout where England paid the price for the missed attempts by Marcus Rashford, Jadon Sancho and Bukayo Saka, ultimately losing their first major final in 55 years 3-2 on penalties.

England last won a major international tournament way back in 1966 when they lifted their lone FIFA World Cup title.

With their loss against Italy, England yet again failed to grab their chance to end their decades-long drought without a major trophy and Kane believes that their heartbreaking loss to Italy in the Euro 2020 final will continue to hurt his team throughout the rest of their careers.

"Penalties are the worst feeling in the world when you lose. It wasn't our night but it's been a fantastic tournament and we should hold our heads high."

"It hurts now. It's going to hurt for a long time. But the boys should be proud."

​"We should be extremely proud as a group of what we have achieved. We're all winners and want to win so it will probably hurt for a while and it will hurt for the rest of our careers, but that's football", the English skipper added.

On the other hand, England boss Gareth Southgate blamed himself for the team's defeat.

Southgate was heavily criticised by fans and pundits alike for his decision to pick Rashford, Sancho and Saka to take the penalties, particularly for sending the 19-year-old Saka to deliver the fifth kick, especially when a more experienced Raheem Sterling was still available.

Euro 2012 finalist with Italy Federico Balzaretti questions Gareth Southgate's decision to bring Sancho and Rashford one in the final minute of extra time.#AstroEuro2020 brought to you by @Vivo_Malaysia pic.twitter.com/2cltraypWq

However, the English manager defended his decision to opt for the likes of Rashford, Sancho and Saka to take the crucial penalties for the Three Lions.

"That is my responsibility. I chose the guys to take the kicks. I told the players that nobody is on their own in that situation."

“We win and lose together as a team. They have been tight throughout and that’s how it needs to stay."

"It is my decision to give him [Saka] that penalty. That is totally my responsibility. It is not him or Marcus or Jadon. We worked through them in training. That is the order we came to", Southgate said.

He also said that he always knew that he was taking a gamble with Rashford, Sancho and Saka, but defended his choice of players for the penalties because according to him they were all in great form.

"That's always the risk you run but they’ve been by far the best in the lead-in. To get all those attacking players on you have to do it late. It was a gamble but if you gamble earlier you maybe lose in extra time anyway", Southgate added.

Former Indian captain Renedy Singh, however, didn't agree with Southgate's choice of players in the penalty shootout, calling it a 'tactical blunder' on the English manager's part.

"There's no doubt Gareth Southgate's decisions cost England the game. Just tell me why would you change the winning tactics which have given you so much success in the tournament", he told Sputnik on Monday.

"It is beyond my understanding why an experienced manager like Southgate will opt for a 19-year-old to take the final penalty at a big tournament like the Euros", Singh added.