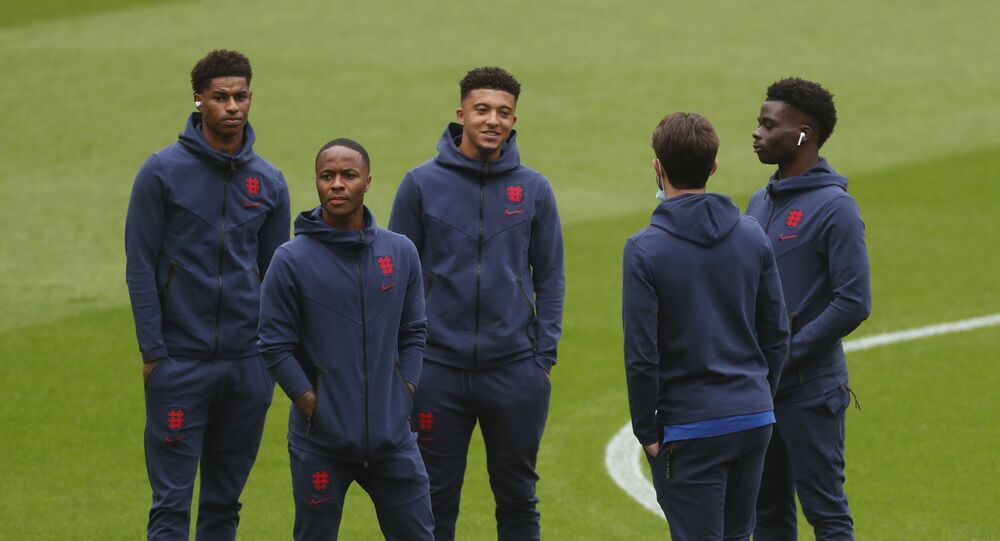 Earlier, London police said they would be investigating "a number of offensive” social media comments targeting some of the footballers following the defeat of England's national team in the Euro 2020 final against Italy at Wembley on Sunday night.

The Football Association (FA) has issued a statement strongly condemning racist abuse online aimed at some of the players of England’s national football team after its Euro 2020 loss in the Sunday final.

Responding to the targeting of Black England players Marcus Rashford, Bukayo Saka and Jadon Sancho – all of whom had their spot-kicks deflected by Italy’s keeper Gianluigi Donnarumma – the governing body of association football in England issued a statement on Monday morning that read:

“The FA strongly condemns all forms of discrimination and is appalled by the online racism that has been aimed at some of our England players on social media. We could not be clearer that anyone behind such disgusting behaviour is not welcome in following the team. We will do all we can to support the players affected while urging the toughest punishments possible for anyone responsible.”

England saw its dream of ending a Euro trophy drought shattered as it lost to Italy 3-2 on penalties after a 1-1 draw at Wembley.

The FA statement vowed that it would “continue to do everything we can to stamp discrimination out of the game, but we implore government to act quickly and bring in the appropriate legislation so this abuse has real-life consequences.”

The FA also urged the social media companies to take action to identify and “ban abusers” from their platforms. None of the three players themselves have yet officially commented on the developments.

However, the official Twitter account of the English team put out a statement to voice its “disgust” over the comments directed at footballers, condemning the behaviour as “unacceptable”.

We’re disgusted that some of our squad – who have given everything for the shirt this summer – have been subjected to discriminatory abuse online after tonight’s game.

We stand with our players ❤️ https://t.co/1Ce48XRHEl

​Earlier, London police acknowledged they were aware of "a number of offensive and racist social media comments being directed towards footballers" following England's defeat, and promised a thorough investigation.

We are aware of a number of offensive and racist social media comments being directed towards footballers following the #Euro2020 final.

This abuse is totally unacceptable, it will not be tolerated and it will be investigated.

Following the bitter loss of England's team, at least 49 arrests were made in the city, with 19 officers injured while confronting aggressive fans, some of whom were seen burning firecrackers and overturning dumpsters in London.

In response to the manifestations of racial abuse online directed at the players, numerous Twitter users gave them their support after the game.

London Mayor Sadiq Khan went on Twitter to underscore there should be “no place for racism” in football or anywhere else.

“Those responsible for the disgusting online abuse we have seen must be held accountable - and social media companies need to act immediately to remove and prevent this hate.”

This England team deserve to be lauded as heroes, not racially abused on social media.

Those responsible for this appalling abuse should be ashamed of themselves.

​Many social media users flooded the internet with messages of support to the players while condemning the behavior of some fans as well as the violence seen in the streets.

Jadon Sancho, Bukayo Saka and Marcus Rashford being racially abused on social media. And this is why #ENG players will continue to take a knee. Also, Twitter and Instagram have to be quicker and stronger to stop these hate crimes on their platforms.

Racism and hatred for other cultures has been at the core in England for a lot longer than the social media companies have been around..

And this. Fans beating up other fans inside Wembley. There was inadequate stewarding and police presence. https://t.co/swy8TTmGak

Its govt duty to take action against abusers. Take action 🙏

Sadiq please protect these three talented players. They need nothing but love now❤️❤️❤️❤️

There seems to be a lot of violent videos surfacing on twitter of England fans attacking people and throwing poc in the river and beating an Italian fan. I've also seen a post with a random list saying that violence will happen to black people on the 12th July.

Some shocking scenes around Wembley & London, who thought it was a good ideal to have a evening kick off, giving a full day for so called fans to get drunk & fuel the violence & carnage they have left behind
Feel ashamed on what should have been a day to be proud#Euro2020Final

They just can’t help themselves, and they let down the real fans 😡 pic.twitter.com/Cssdck05UP

​The victory at Wembley stadium brought Italy its first European title since 1968, while crushing England’s hopes of securing a major trophy since 1966, when they beat West Germany 4-2 in the World Cup final.