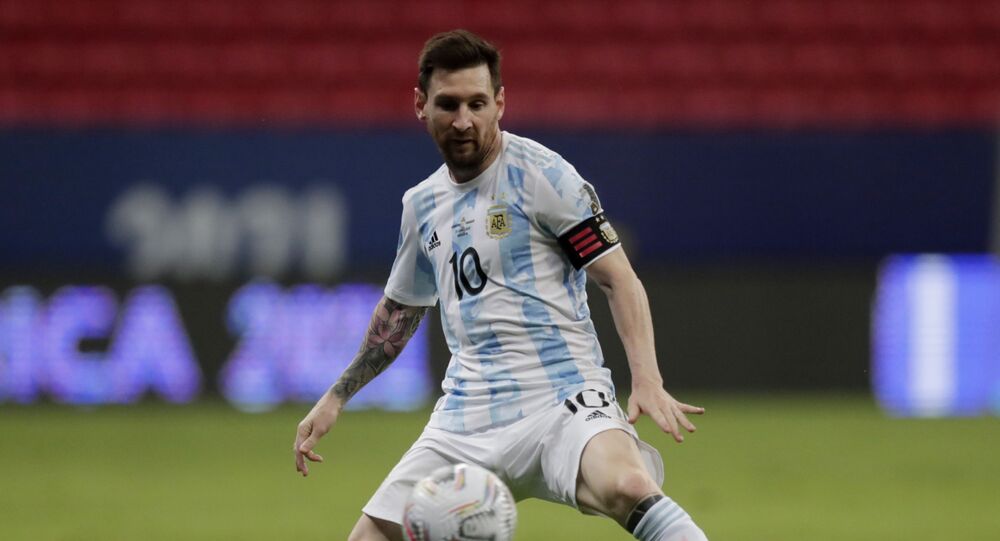 As Argentina Faces Brazil, What Records Could Lionel Messi Break in the Copa America Final?

Argentina skipper Lionel Messi is attempting to end his country's 28-year wait for a major international trophy. The South American nation last won a prestigious football tournament back in 1993 when they captured the Copa America title.

Football icon Lionel Messi's performance has been the biggest highlight of the ongoing Copa America 2021.

Not only has the Argentine been the highest goal-scorer, with his four goals in the competition, he has also contributed heavily to his team's cause with his five assists, which helped them to reach the final in Rio de Janeiro.

Here's what Messi's Argentina are up against on Saturday... 😳

​Out of the eleven goals Argentina has scored in the tournament, the superstar has been responsible for nine, either as a scorer or by providing assists.

Messi has also created a number of records in the prestigious continental competition as he became the most capped player for Argentina after he broke Javier Mascherano's long-standing record of 147 appearances.

The final against Brazil will be his 151st appearance in Argentina colours.

The 34-year-old is chasing a few more records in the tournament. Let's take a look at the feats Messi can accomplish in the final.

Most Appearances in Copa America

Chile's Sergio Livingstone holds the record for participating in the most Copa America matches.

The Chilean played 34 matches in the competition and leads Messi by one game, who has appeared in 33 matches in the tournament, which he has never won.

The blockbuster final against Brazil will put Messi on level terms with Livingstone. But more than the record, he will be aiming to break his country's drought at major tournaments.

Most Goals in Copa America

Messi is four goals behind the all-time record held by his countryman Norberto Mendez and Brazil's Zizinho, with both men scoring 17 goals each in the tournament.

Most Caps for Argentina

Messi became the most capped player for his national team, breaking his former Barcelona teammate Javier Mascherano's record of 147 appearances for Argentina.

At the start of the tournament, Messi had featured in 144 matches for Argentina, but beat Mascherano's tally during his side's match against Bolivia. At present, Messi has 150 international caps to his name.

Messi is the first Argentine player to feature in six editions of the competition (2007-2021).

The Argentina captain went past Javier Mascherano's record of five appearances in Copa Americas after Messi played his first match in this year's tournament against Chile on 15 June.

Most Assists in One Edition of Copa America

Messi has made history by providing five assists in six matches of the ongoing tournament, an all-time record in a single edition of the Copa America.

In the Euros there are 5 players who play 5 different positions that lead the tournament in goals, assists, dribbles, shot-creating actions, and progressive carrying distance.

In the Copa America Messi leads all 5 of these categories on his own. Most complete player. pic.twitter.com/BuFO20u0Ff

Former Indian midfielder Syed Rahim Nabi believes Messi's form and Argentina's determination should see them through against Brazil in the final.

"Messi has been phenomenal in the tournament - he has scored goals, provided assists and more than that he has inspired his team. I believe without their captain's assistance, Argentina wouldn't have been in the final," he told Sputnik on Friday.

"There's no doubt Messi has led the side well, but he will have to deliver both as a player and a leader one more time to win the Copa America against Brazil," he added.