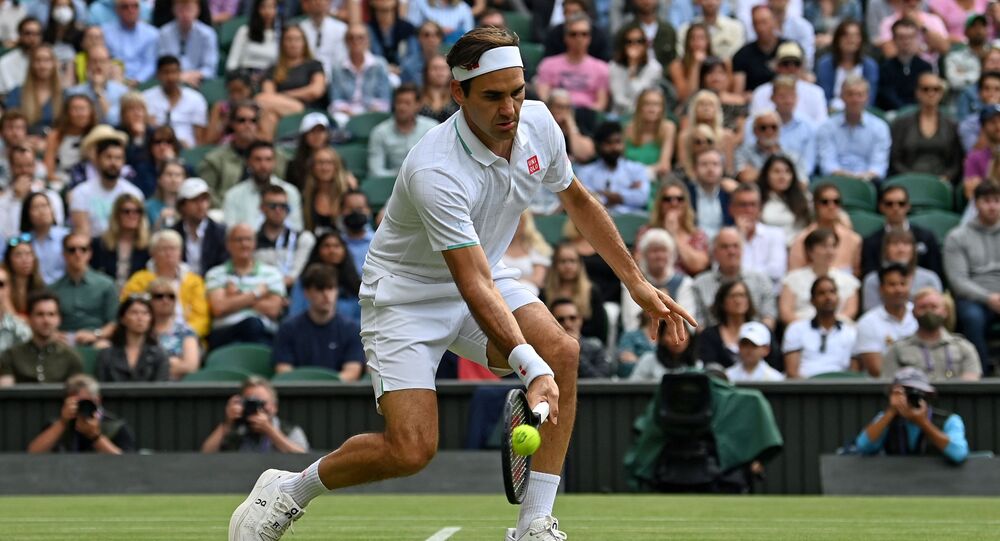 On Wednesday, Poland's Hubert Hurkacz became the first player to defeat former World No. 1 Roger Federer in straight sets at Wimbledon since Croatian Mario Ancic achieved the feat 19 years ago in 2002. He is also the first player ever to bagel the eight-time champion at SW19.

Since Roger Federer beat American legend and then defending champion Pete Sampras at Wimbledon in 2001, he had made the sacred Centre Court his home.

After his path-breaking win over Sampras, countless records followed Federer at the All England Club.

He has won the tournament a record eight times, reached the final an unprecedented 12 times, and won the most matches at the Grass Slam.

However, when the 39-year-old Swiss maestro arrived at SW19 after having two knee surgeries last year and little match play behind him, there were suspicions that this could be his last Wimbledon.

On Wednesday, the lingering doubts seemed to have become a reality after the 20-time Grand Slam champion was knocked out of the world's preeminent tennis tournament in the quarterfinals by little-known 24-year-old Hurkacz.

Hurkacz, who had hardly won any matches on the grass, handed Federer his biggest defeat at Wimbledon after he won 6-3, 7-6(4), 6-0 without any difficulty. Before his huge win over Federer, Hurkacz had won only four matches on the surface.

An ovation for 22 years of memories 👏

It's been a pleasure as always, @rogerfederer #Wimbledon pic.twitter.com/GvsOenp68C

​Before his match against the Pole, Federer had won a record 105 matches at Wimbledon, but had never dropped a set 6-0 at SW19. He finally accomplished the unwanted feat as Hurkacz managed to bagel him in the third set.

It wasn't just the score line that seemed to worry Federer's fans, but the manner in which the Basel native performed during the set, something that stirred panic among them. At times, Federer looked rattled, clueless, and without ideas.

Well before his fate was sealed at the Centre Court, there was also chatter among fans, pundits, and former players about what they believed was Federer's last outing on his beloved Centre Court.

As soon as Federer lost, fans began speculating about his retirement, while some of them wished for him to make a return again next year.

But, there were a few others who believed that the great man had lost his zeal for the sport and could very well announce his retirement from the game soon.

We are witnessing the end of one the greatest ever tennis players to walk this planet.
The pleasure was all ours #Federer pic.twitter.com/NxLr8nLYlM

Roger and out. The great @rogerfederer loses. Even the very greatest can’t defy Father Time. 😢

Roger Federer crashes out of #Wimbledon with one of his poorest performances here, falling 6-3, 7-6(4), 6-0 to Hubert Hurkacz in the quarterfinals.

We are witnessing the end of one the greatest player of tennis... Most likely this is his last #Wimbledon#Legend #GOAT #RogerFederer #federer @Wimbledon pic.twitter.com/lCdIABwypn

"I noticed the mishits, awkward looking points from Roger and obviously the last set of course, 6-0", said Becker. "He would never ever say if there was a niggle, but I don't know if we will ever see the great man again here".

Vishal Uppal, who played Davis Cup for India, also agreed with Becker's assessment that the world might have seen Federer for the very last time at the All England Club.

"It is an end of an era in some ways. This may have been the last we see of Federer at Wimbledon", Uppal told Sputnik on Thursday.

He didn't play his best tennis and it was apparent age has caught up with him", he added.

"I don't know. I really don't know. I've got to regroup", Federer said when asked if he will be back at Wimbledon next year. "With everything that comes after Wimbledon, we were always going to sit down and talk about it because clearly now Wimbledon is over. I got to take a few days".

"Clearly there's still a lot of things missing in my game that maybe 10, 15, 20 years ago were very simple and very normal for me to do. Of course I would like to play it again, but at my age you're just never sure what's around the corner", added Federer.

"At my age, you're never sure what's around the corner"

​"I will take my time, not feel rushed by you guys or anybody else. I got to take my time, take the right decision, the one decision I want to take and where I feel most comfortable".

"The team and me were actually very happy I made it as far as the quarters here. That's how it goes. I'll be fine. I have perspective about it, so it's all good", he added.