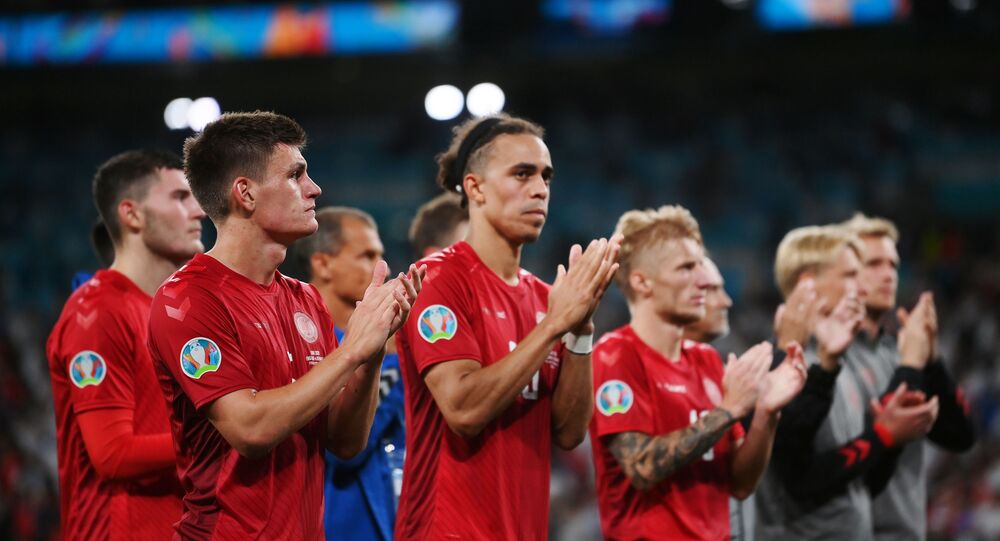 England made history on Wednesday, making it through to their maiden European Championship final after beating Denmark 2-1 in a nerve-racking game at Wembley. The Three Lions will attempt to win their first major international trophy in 55 years when they face Italy in the tournament final on Sunday.

Home favourites England defeated a gritty Denmark in extra-time to finally end their hoodoo in the semifinals of big football competitions, but their victory came with a huge controversy.

"This will debated for a long, long time!"

A tough night for @Pschmeichel1 who is convinced that the referee made a mistake on the penalty. #beINEURO2020 #ENGDEN #EURO2020

Harry Kane and his men were under tremendous pressure after Denmark surged ahead with the help of Mikkel Damsgaard's sensational free kick in the 30th minute.

However, urged on by a raucous home crowd, Gareth Southgate's team found their mojo almost immediately as they forced the Danish centre-back Simon Kjær to commit a mistake, which eventually resulted in an own goal from the AC Milan defender.

With the score tied at 1-1, the match went into extra-time and that's where a dubious decision by the referee led to an uproar.

The actual drama unfolded in the 103rd minute, when English winger Rahim Sterling somehow managed to escape through Denmark's defence to reach the box before being challenged by defender Joakim Mæhle.

Even though it looked like the contact was minimal, referee Danny Makkelie thought it was enough to award a penalty to England after VAR confirmed that Mæhle had indeed touched Sterling.

Kane opted to take the penalty and although Danish goalkeeper Kasper Schmeichel managed to save his penalty, the Tottenham striker succeeded in scoring a goal on the rebound to send England into their first-ever Euro final with a hard fought 2-1 victory.

It was Kane's fourth goal of the tournament, which put him on level terms with the legendary Gary Lineker for scoring the most combined goals at the Euros and FIFA World Cups as an English player.

Would love him to go clear in the final. 🙌🏻 https://t.co/N5Iymn9JNi

​The 27-year-old won the Golden Boot at the 2018 FIFA World Cup in Russia, where he scored six goals. With his strike against Denmark on Wednesday he took his goal tally to 10 in major tournaments.

Lineker has the same number of goals combined in both competitions.

Despite England's win and Kane's record-breaking feat, his controversial strike set off a massive firestorm on Twitter.

Raheem Sterling has been absolutely spectacular this tournament, but that should never, ever be given as a penalty. Clear and obvious error and a shameless dive from Sterling — Denmark have been robbed blind with that call.

England totally deserve to be ahead but I don't think that's a penalty. Put it this way, if the ref doesn't give it, there's no way VAR reviews it and awards it.
Fair enough if you say 'who cares.' But if that's the case, don't moan when it happens against you!

I still can't believe they gave England that penalty. What a joke

This is the most rigged penalty ever for sure, feel bad for Denmark

After this match England has nothing to mock about Immobile.

Stoic Danes fighting bravely with class and English forwards falling down on every slightest contact.

What a cheap penalty.

Thank you Denmark for a fine tournament and such a comeback! 🇩🇰#ENGDEN #EURO2020

If Kane's debatable penalty wasn't enough, a second controversy erupted soon after as footage on social media showed a fan pointing a laser pen at Schmeichel from the stands.

•Two balls on the field.
•Sterling taking a dive to get penalty.
•Laser in the eye of Danish goalie Kasper Schmeichel before Harry Kane shot the penalty.

The referee and match officials saw none.
Denmark was robbed.
England got gifted.#ENGDEN #EURO2020 #englandvdenmark pic.twitter.com/6uFkB9bxPs

CCTV everywhere so the idiot who shone a laser pen at Casper Schmeichel during the penalty should be pictured, identified, prosecuted, jailed, shamed and banned from football for life. Dangerous idiot #Euro2020

Former Indian footballer Mehtab Hossain, though, feels that the whole controversy was a sham.

"I don't understand what the whole controversy is all about. Once the VAR confirmed Joakim Mæhle touched Rahim Sterling, there was no doubt about the legality of the penalty", he told Sputnik on Thursday.

"England deserved to win as they were the better side throughout the match and I am quite confident they will win the Euro title on Sunday", Hossain added.