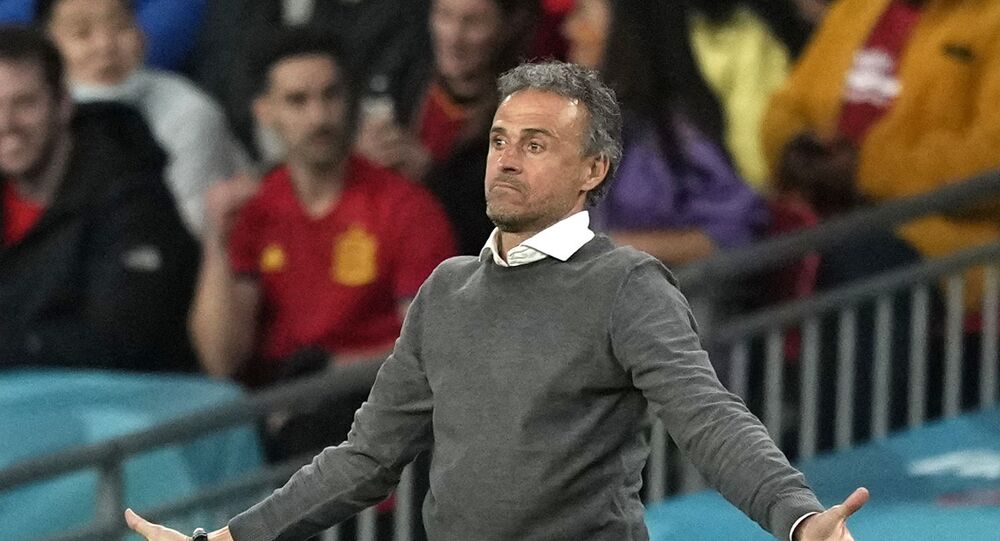 Spain lost their Euro 2020 semifinal to Italy in a penalty shootout on Tuesday. It was the second successive European Championship to see the team from the Iberian Peninsula beaten by the Italians. The Spaniards were ousted from Euro 2016 in France by Italy as well.

Liverpool fans have criticised Spain manager Luis Enrique's decision not to start midfielder Thiago Alcantara in their Euro 2020 semifinal against Italy on Tuesday. Thiago only came on as a late substitute in extra-time and did his job quite well by converting his spot-kick, but his team still went out 4-2 on penalties.

Enrique was slammed for his tactics throughout the tournament as he failed to pack the Spanish side with strikers who could dominate the proceedings in front of the goal.

Their inability to score goals despite dominating almost all areas of the game came to haunt them in the semis against Italy as Roberto Mancini's side prevailed in a penalty shootout after Alvaro Morata missed an all important shot on goal.

For example, in terms of ball possession, Spain outpaced Italy, 71% to 29%. Enrique's side completed 908 passes, while Italy only had 387 during the contest.

Italy had just seven shots on goal versus Spain's 16. The three-time European champions also made fewer offsides - one in comparison to Italy's eight.

Even after having most of the statistics in their favour, Spain was undone by Italian goalkeeper Gianluigi Donnarumma's brilliance, saving Morata's spot-kick to send his team into the final.

When the Spain manager was asked about his underutilisation of Thiago at the Euro 2020, he gave a cryptic response.

"Thiago is a very good player. You know and everybody knows about his quality but we are a strong team and I try to give them minutes", he said in his post-match press conference on Wednesday. "He's helping the squad a lot because he's an experienced player and we are very happy to have him in the squad. After that, I have to decide and my decision speaks much better than me", he added.

Twitterati were furious with Enrique's response as they felt he had missed the boat by not featuring Thiago in his starting eleven at the beginning of the match.

The coach wanted to win but left Thiago in the bench mad! Thiago played his part

Rodri and not Thiago?! Method of some madness there, Luis Enrique.

Italy will now take on home favourites England in Sunday's final at Wembley Stadium in London.

What Do Football Fans Eat During EURO-2020?

'No One Believed We Could Do It': Italy Boss Roberto Mancini on Reaching Euro 2020 Final