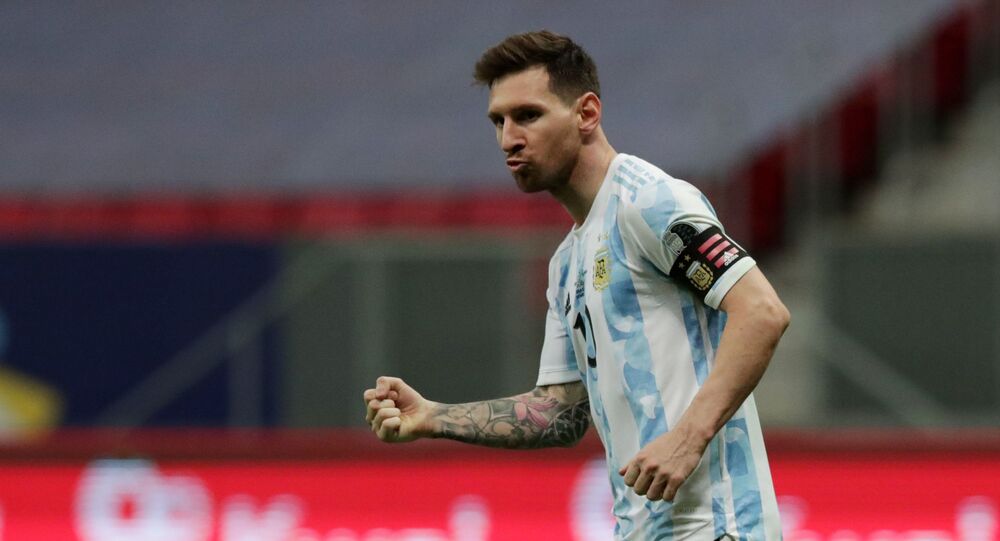 Argentina skipper Lionel Messi will have another opportunity to win his maiden major international title against Brazil on Saturday after leading his national team to victory over Colombia in the Copa America 2021 semis on Wednesday.

Messi played a major role in Argentina's triumph as he gave them a flying start, assisting Lautaro Martinez in his seventh minute goal against Colombia.

However, it was goalkeeper Emi Martinez, who turned out to be the ultimate hero for Argentina, as he saved three penalties to secure his team's place in the final after the two sides failed to break the deadlock in extra time.

Martinez's shot at glory came after both teams were tied at 1-1 in normal time. Earlier, Colombia equalised in the 61st minute with the help of Luis Diaz's goal.

Mina made headlines with his wild celebrations during Colombia's quarterfinal win against Uruguay on Sunday.

The 26-year-old was widely criticised after he broke into a dance well before Colombia won the match 4-2 on penalties.

But in the Copa America semis on Wednesday, it was Messi and his teammates who were seen celebrating their win before the six-time Ballon d'Or winner decided to taunt Mina for his missed penalty.

According to visuals available on Twitter, Messi could be seen shouting "How about dancing now" at the Colombian footballer.

Not just saving penalties, Martinez did his bit to shake the Colombian team's confidence as he was doing a fair bit of trash-talking with them.

​In his post-match conference, Messi labelled Martinez a "phenomenon".

"We have Emi, who is a phenomenon. We trusted him. We achieved the goal of being able to play all the games and now we are going to the final", Messi said.

Emiliano Martinez telling Yerry Mina “You look scared” right before the penalty. He was right.

ARGENTINA wins the SHOOTOUT!!! Emiliano Martinez makes THREE penalty saves & Messi and Lautaro are among those to convert.

Martinez did ALL the trash talking during penalties, and it definitely got into Colombian takers' heads.