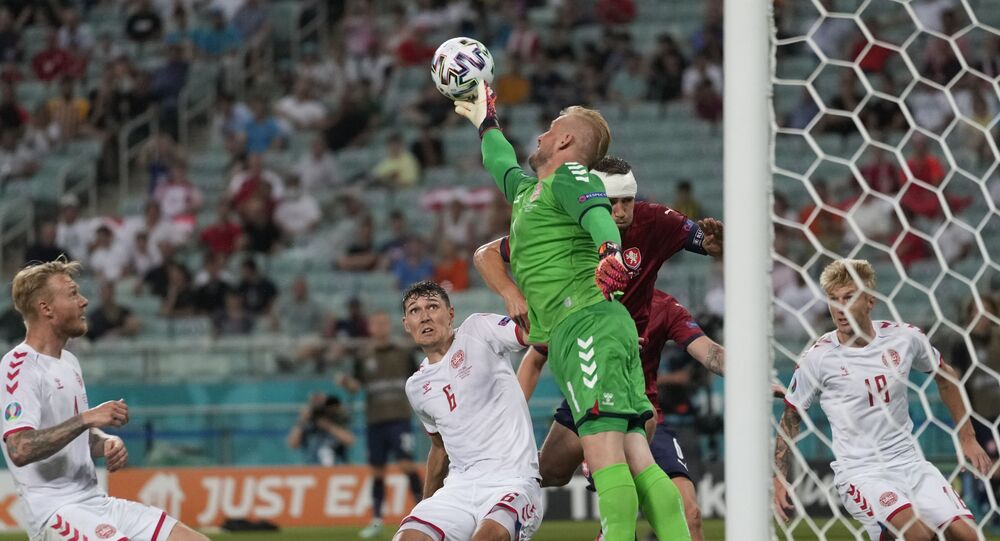 Who Are the Key Players Who Could Make the Difference in Euro 2020 Semifinals?

Italy take on Spain in the first Euro 2020 semifinal on Tuesday, having already seen off Belgium, who were ranked by FIFA as the best in the world. Then on Wednesday, England will be hoping to use home advantage to overcome Denmark.

Former Manchester United goalkeeper Peter Schmeichel has backed his son Kasper to deliver Denmark into the Euro 2020 final if the Danes end up in a penalty shootout with England on Wednesday night.

Schmeichel, 57, said: "It's another challenge. You have to deal with that and it is part of the job you've chosen to do. You know how significant it is and how big it is but at the end of the day you can only do so much as a goalkeeper and he will be prepared for it".

Kasper Schmeichel will be one of Denmark's key players during the semifinal and will be hoping not to repeat the mistake that led to Finland's winning goal in their first game.

​That game was tarnished by the cardiac arrest suffered by Danish midfield star Christian Eriksen, which may have hampered Schmeichel's concentration.

Denmark also lost their second game to Belgium but they bounced back by demolishing Russia 4-1 and they have been on fire since, with a team spirit and desire to play apparently inspired by what happened to Eriksen.

​While the Danish victories over Wales and the Czech Republic were very much team efforts, their squad does have a couple of young midfield stars in it who have been making names for themselves.

Mikkel Damsgaard, 20, was signed by Italian team Sampdoria last summer for £5.8 million but is now tipped for a possible move to Barcelona.

​England's defence will be hoping to keep tabs on him and also on Kasper Dolberg, 23, who was signed from Ajax in 2019 by Nice manager Patrick Vieira.

The Danes have been getting steadily better after a poor start but England have been consistent throughout and their success has been built around a tight defence, which has not conceded a single goal yet.

So, Everton goalkeeper Jordan Pickford and centre back Harry Maguire of Manchester United will be among England's key men on Wednesday.

All three goals have come in the last two games. 👀 pic.twitter.com/X8RhTOXECs

​If England can keep the back door shut they can go all the way to the final with goals by the odd couple up front.

Raheem Sterling and Harry Kane have scored three goals each and have been linking up well in attack.

But what of the other semifinal?

​Italy have been a revelation in this tournament. Out has gone the defensive dourness and slow build-up play, replaced by rapid passing and devastating counter attacks.

Sadly, Leonardo Spinazzola will miss the rest of the tournament after rupturing an Achilles tendon against Belgium but they have plenty of attacking guile elsewhere.

Ciro Immobile - mercilessly mocked on social media after he got up and celebrated an Italian goal against Belgium moments after rolling around injured - provides a goal threat up front and is formidably backed up in midfield by Lorenzo Insigne, Enrico Chiesa, and Manuel Locatelli.

Today will win and I have a great feeling about this match.
Forza Italia forza Mancini#ITASPA https://t.co/RoQ2F1E59h

​But although Italy are an exciting attacking unit, it is built upon a defensive fortress.

Goalkeeper Gianluigi Donnarumma has been superb so far and 36-year-old Giorgio Chiellini and Juventus teammate Leonardo Bonucci have been outstanding in front of him.

It will be fascinating to see how Chiellini and Bonucci deal with Spain's main goal threat, Alvaro Morata.

Morata - who moved from Chelsea to Atletico Madrid last year before going out on loan to Juventus - answered his critics in magnificent style with a great goal against Croatia and both Chiellini and Bonucci know how good he is as they played together at Juventus last season.

Azpilicueta was born in Pamplona and, like that city's famous bulls, he is both fearless and aggressive - good qualities for a defender.

Although he is not Spain's captain - that role is performed by Sergio Busquets - he offers plenty of leadership in defence and will be vital as they take on the formidable Italians.