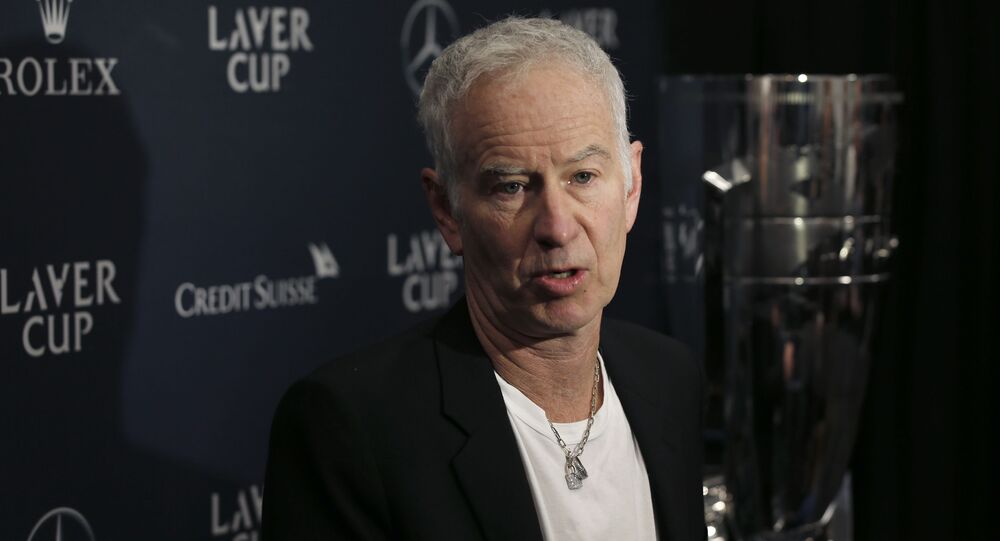 Former World No. 1 John McEnroe is a highly controversial figure in the tennis world. During his playing days, the American was known for his confrontational on-court behaviour. Since retiring from tennis, he is known for making outrageous comments about players, fans, and the game.

Seven-time Grand Slam champion John McEnroe has been widely slammed for his insensitive comments about home favourite and teenage sensation Emma Raducanu's departure from Wimbledon due to medical reasons.

Raducanu, 18, who became the darling of British fans due to her run to the Round of 16 in the tournament was forced to retire from her match against Ajla Tomljanovic of Australia after suffering from stomach cramps and breathing problems. She was trailing her opponent 6-4, 3-0 on Court No. 1 on Monday.

While Raducanu retired from the contest on medical grounds, McEnroe thought otherwise.

McEnroe, who was in the commentary box for the BBC, suggested that the young Brit pulled out of the match as competing for a place in the Wimbledon quarterfinals was "a little too much" for her.

"I feel bad for Emma, obviously. It appears it just got a little bit too much, as is understandable, particularly with what we've been talking about this over the last six weeks with Osaka not even here", McEnroe said.

"How much can players handle? It makes you look at the guys that have been around and the girls for so long – how well they can handle it. Hopefully she'll learn from this experience".

"I don't think it helped that the previous match went as long as it did because it made her think about it more. That's a lot to take on, especially when you've never been there before", he added.

"Maybe it's not a shame this has happened right now when she is 18. I played this tournament at 18 and in a way I was happy I lost. I was able to understand what it would take to make it. Allow her to take some deep breaths and maybe get some wildcards", he concluded.

McEnroe, a three-time Wimbledon champion, who won the event in 1981, 1983, and 1984 was criticised by a section of social media after he claimed the talented British girl opted to retire because she was unable to handle the pressure of playing in the Round of 16 of her home Grand Slam.

As soon as McEnroe made the comments, many people began trolling him on the micro-blogging site Twitter.

The American commentator faced a massive social media backlash as Twitterati started slamming him for questioning a player's integrity and honesty, particularly when he didn't know the reasons for her withdrawal.

Listening to the John McEnroe commentary about Emma Raducanu. Two things: 1. Is he drunk? 2. Is there anything more annoying than a man telling a woman she’s not hurt she’s just emotional? No, no there isn’t. Please ask him to stop. #Wimbledon

Tennis Tweet on #Wimbledon - but how can John McEnroe come out with those comments not knowing anything about her retirement from the match?!

Feel like the producers could have given given McEnroe a bit of a better mental health briefing ahead of him sharing ALL the views there. But you do you.

John McEnroe is an absolute embarrassment. And you’re just as bad for not defending Emma more. Shocking @clarebalding 😐 #Wimbledon

John McEnroe is a disgrace.#Wimbledon #raducanu

I hope you get rid of John Mcenroe that was appalling. Comments like that bang out of order and making assumptions and bringing other players stories into it. Get well @EmmaRaducanu

When Tomljanovic was told about McEnroe's remarks during her post-match press conference, the Croatian-born Australian called them "definitely harsh".

"I wasn't 100 percent sure what was wrong with Emma. I did hear the reasoning. I'll start with saying that I can't imagine being in her shoes at 18, playing a fourth round in your home country. It's something I can't even imagine", Tomljanovic said.

"For him (McEnroe) to say that, it's definitely harsh. I have experienced something similar but not to that extent. I know that it's a real thing. I've spoken to athletes that have gone through that. It's not easy".

"When I heard the reasoning, I almost felt worse about it because I know how bad that can feel. But then again, it didn't happen to me. I can't imagine how she must be feeling having to pull out".

"Being down 6-4 3-0, you can come back from that quickly, especially on grass. It's really sad that she had to do that. I do feel sorry", Tomljanovic added.

"McEnroe's comments were completely unnecessary. It is hard to believe someone who has won multiple Grand Slams and has been in such positions on many occasions, can say something like this", he told Sputnik on Tuesday.