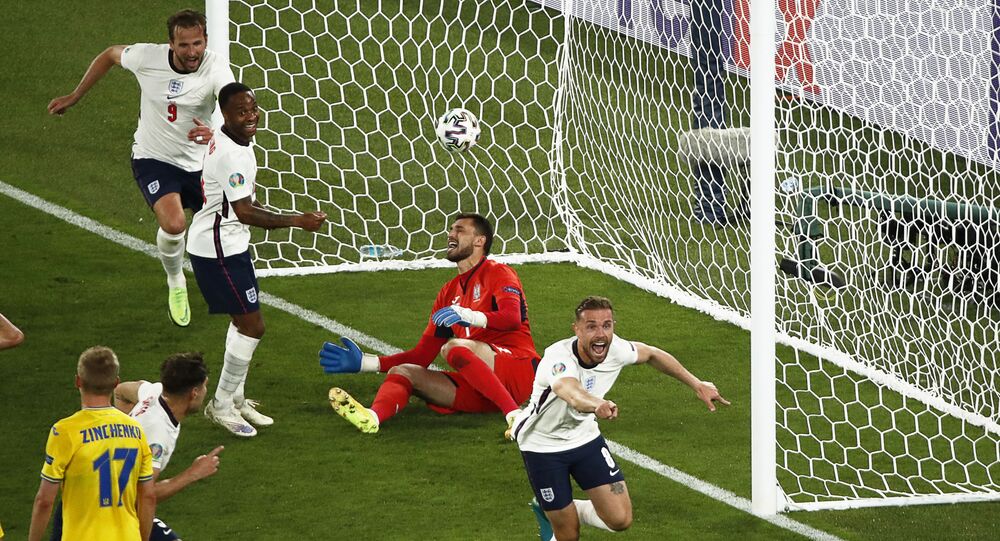 On Wednesday, the Three Lions will face Denmark in the Euro 2020 semifinal, with England manager Gareth Southgate making known his side's readiness "to go the next step".

England will make it to the UEFA Euro 2020 final on 11 July at London's Wembley Stadium, where they, however, will yield to Italy, a supercomputer has predicted.

According to the Stats Perform Euros Prediction model, Roberto Mancini's team has a 39.1% chance of winning their second European Championship, while the Three Lions are the runners-up, with a 29.2% chance of taking home the trophy.

Spain and Denmark are given 23.1% and 8.6% chances, respectively, in line with the supercomputer's forecast, which comes ahead of the Italy-Spain and the England-Denmark semifinals.

The predictions come after England boss Gareth Southgate told The Independent that Danish footballers are "riding a wave of emotion" that has transformed them into a "powerful force" ahead of their clash with the home side.

Southgate claimed that Denmark had made it through to the Euro 2021 semifinals on the back of the Christian Eriksen incident.

The Danish midfielder suffered a cardiac arrest in Denmark's opening match against Finland and was rushed to a hospital after receiving lifesaving CPR from his teammates on the pitch.

"[…] I can also imagine what it has done for the Danish team, their bond. We are talking about the things we have been through but what they went through that day – the way their captain [Simon Kjaer] was and the way the group was – and how that would have connected with their supporters, that's pretty powerful", Southgate said.

He added that playing at Wembley will give England the advantage because the crowd will be behind them.

© REUTERS / ETTORE FERRARI
England Slides Into Euro 2020 Semi-Finals After Defeating Ukraine
"It's great to be coming back now. To go and have that different environment, preparation, focus was definitely helpful. But now to be coming back to Wembley is a great thing for us. It's not for me to tell the fans how to be or what to be", he stressed.

According to Southgate, "our group are ready to go the next step, they are excited by that challenge".

England has not made it to the final of a major football tournament since winning their only World Cup title in 1966. At Euro 2021, England made it to the semifinals after eliminating Germany and Ukraine and the team is currently seen as the tournament's favourites.