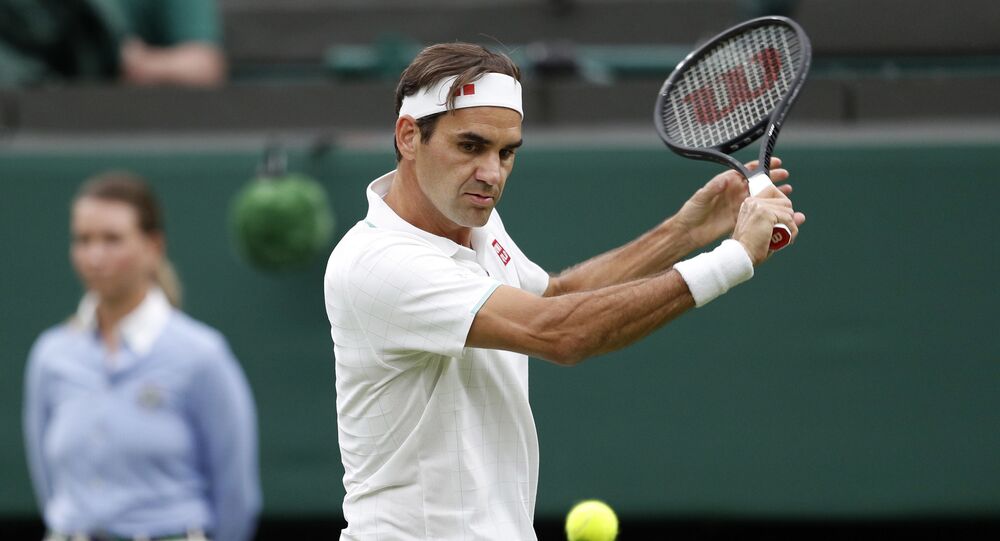 Eight-time champion Roger Federer made his return to Wimbledon on Tuesday, securing a tough opening round win over Frenchman Adrian Mannarino, who retired due to an injury in the fifth set. It was the Swiss legend's first match on the Centre Court since his epic loss to Novak Djokovic in the 2019 final.

While former World No. 1 Roger Federer may have succeeded in getting past a tough French opponent, Adrian Mannarino, in Wimbledon, it's not his scratchy win but his response to an English reporter that's leaving a lot of tennis lovers in peals of laughter.

The incident occurred during his on-court interview with an English reporter that stole the limelight from his lucky win over the man from France.

During the interview, the 20-time Grand Slam champion was asked by the reporter if he had missed Wimbledon during his injury layoff.

The reporter, who used the proverb "absence makes the heart grow fonder" to ask the question, immediately got a response from Federer, which seemed quite funny and made the whole crowd laugh at the Centre Court.

"My English is not good enough!"

"A good reminder that my English is not very good. I think we're all very happy, all the players and fans and organisers and everybody, that we get a chance to play back on tour overall and especially at Wimbledon".

Considering Federer can speak eight different languages, his response to the reporter certainly appeared to be full of humility.

Many social media users lauded Federer for his honest and humble approach during the interview.

Love how honest @rogerfederer is here about not understanding the question in English. So many athletes deal with similar anxiety when doing interviews.

Federer (who’s been doing these for decades) shows it's OK to say you don't understand the question. pic.twitter.com/YJZuE5uvJd

Would argue that Federer's English is extremely good. I once had an editor marvel at how he doesn't often use filler words during interviews. https://t.co/gGeNJCzbIn

​Former India tennis player Vishal Uppal also praised Federer for being one of the most humble guys on the men's tour.

"The biggest factor behind Roger Federer's worldwide popularity is his humility and accessibility among the fans", Uppal told Sputnik on Wednesday.

"The manner [in which] Federer conducts himself in public, his treatment of fans, his down-to-Earth nature and avoiding all sorts of controversies during his storied career are some of the reasons why people love him so much", he added.

Meanwhile, on Tuesday Federer made his grand return to Wimbledon with the sacred Centre Court, the home of tennis, packed to the rafters to catch a glimpse of their hero.

© REUTERS / CHRISTIAN HARTMANN
Has Another Shock Defeat Ended Roger Federer’s Chances of Winning a 21st Grand Slam?
Federer, who endured a torrid time in 2020 after he was forced to undergo twin surgeries on his right knee, was back on his favourite court on Tuesday. And the crowd was quite ecstatic to welcome him at the SW19.

Over the years, Federer has become a national icon in Britain. Some even say that he's more popular than Andy Murray, the lone Brit to win the Wimbledon Championships in the last 85 years.

Federer, though, was lucky to get through the second round, because his rival Mannarino was in charge of the match as he led the 39-year-old by two sets to one.

But at the start of the fourth set, Federer succeeded in turning the tide in his favour with an early break of serve.

As it looked like the momentum was swinging towards Federer, Mannarino suffered a freak injury after a bad fall on the court.

Federer will face another Frenchman, Richard Gasquet, for a place in the third round on Thursday.