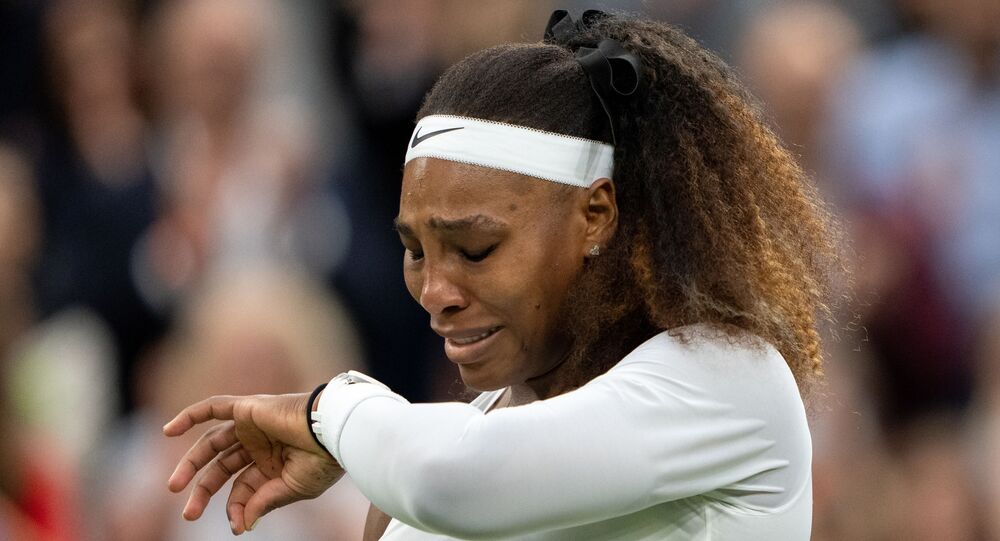 American superstar Serena Williams' dream of winning a record-equaling 24th Grand Slam and an eighth Wimbledon title ended in tears when she slipped on the hallowed Centre Court at the All England Club on Tuesday. It was the former World No. 1's earliest ever exit from the famous tournament.

Seven-time Wimbledon winner Serena Williams was forced to pull out of her opening round match against Belarus' Aliaksandra Sasnovich after she hurt her left leg in a freak accident in the first set.

Gut wrenching first set for Serena Williams. Tried to tough it out but clearly couldn’t power through. Hopefully not the end of Serena’s run. #Wimbledon pic.twitter.com/6br2drkzVy

​It came as another setback for Serena, who last won a Grand Slam at the 2017 Australian Open and is bidding to tie Australian legend Margaret Court's all-time record of 24 Grand Slam titles.

The former top-ranked player in women's tennis slipped on Centre Court when she attempted to hit a forehand in the fifth game.

Visibly in pain, Serena winced and looked extremely uncomfortable while chasing balls on the grass.

After losing that game, Serena asked for the trainer to come out on the court before taking a medical timeout.

After the treatment, she made efforts to continue playing, but with the score tied at 3-all, the 39-year-old's leg buckled during a point and soon after she was seen bursting into tears.

Serena eventually dropped to her knees before calling the chair umpire to inform about her decision to retire from the match.

Saddened to see Serena’s Wimbledon end with an injury.

She’s a champion, and I hope she’s back on the courts soon. https://t.co/zEEtG9YHgk

​Serena's Reaction to Her Injury

Serena didn't address the media after her shock exit from the world's pre-eminent tennis tournament, but took to Instagram to thank her fans for their support.

She wrote: "I was heartbroken to have to withdraw today after injuring my right leg".

"My love and gratitude are with the fans and the team who make being on Centre Court so meaningful. Feeling the extraordinary warmth and support of the crowd today when I walked on -- and off -- the court meant the world to me".

This was just the second time that Serena has retired from a match at a Grand Slam during the course of her illustrious career. The only other time she withdrew from a contest was in the third round of the same tournament in 1998.

Roger Federer was saddened by Serena's injury before saying that he found the Centre Court a bit more slippery than in previous years.

"Oh my God, I can't believe it", Federer told reporters in his post-match press conference.

"I do feel it feels a tad more slippery maybe under the roof. I don't know if it's just a gut feeling", Federer stated. "You do have to move very, very carefully out there. If you push too hard in the wrong moments, you do go down. I feel for a lot of players, it's super key to get through those first two rounds because the grass is more slippery, it is more soft. As the tournament progresses, usually it gets harder and easier to move on", he added.

While Federer said that he was disappointed to see Serena injured, there was a lot of chatter on Twitter, where fans started speculating whether the former champion had played her final match at Wimbledon.

Serena Williams is in tears as she serves at 3-3.

She falls again, and retires.

She is in floods of tears as she waves to the crowd.

This absolutely cannot be how her #Wimbledon career ends. It can't. She HAS to come back.

​On the other hand, there were others who said that it was time for Serena to hang up her racket for good.

Of course she doesn't owe us anything, and she has nothing to prove. I just want her to be able to make her own decision about when to retire from tennis; I don't want an injury making that decision for her.

​Serena Has The Right To Choose The Timing of Her Retirement

However, seven-time Indian national tennis champion Gaurav Natekar feels Serena has the right to choose the timing of her retirement.

"People tend to forget how much Serena has given to this game. She is a great champion and even though I agree, she is well past her prime, it doesn't mean she should retire from tennis now", Natekar told Sputnik on Wednesday.

"I don't think Serena is playing badly, it's just that things have become really tough for her in the last few years due to the emergence of a new crop of power hitters. But she is still good enough to reach the semis and finals and who knows she might just surprise everyone by winning a Slam one day", he added.

Serena Williams Retires in Wimbledon First Round After Injury