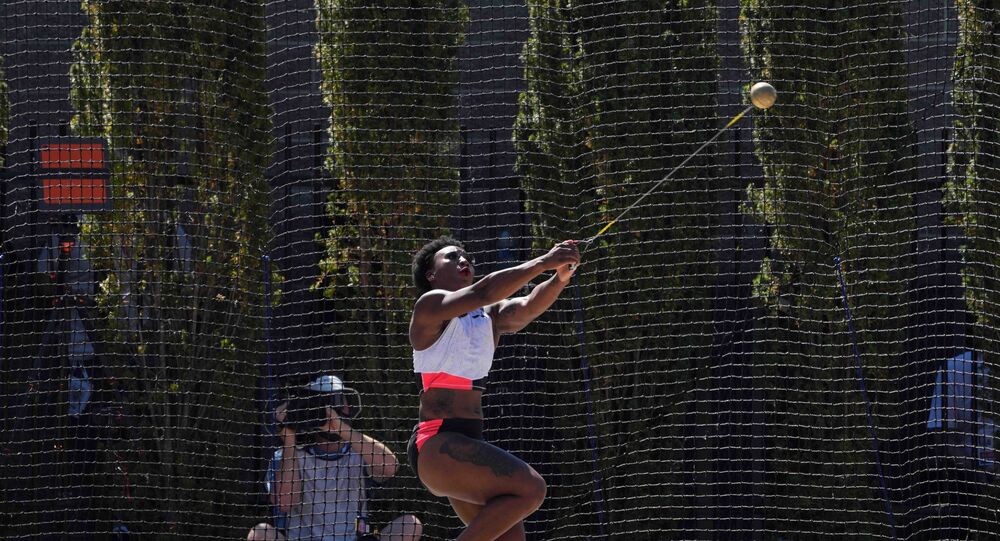 Athlete Gwen Berry, 'Pissed' by National Anthem, Turns Away From US Flag at Olympic Trials - Photo

Berry, a track and field athlete specialising in the hammer throw, has had a history of publicly displaying her political views: in 2019, she raised her fist after the US anthem was played at the 2019 Pan American Games to protest against social injustice and then-President Donald Trump.

Olympic hammer thrower Gwen Berry turned away from the flag at the US Olympic trials on Saturday night in Eugene, Oregon, after being "pissed" that the national anthem was on during a medal ceremony.

Berry, known for her past activism, was on the podium to receive her bronze medal alongside winner DeAnna Price and runner-up Brooke Andersen, who were facing the US flag, holding their hands over the heart as the anthem played.

The 31-year-old athlete, however, put her left hand on her hip and turned away, facing the stands, rather than the flag.

​After a few moments, she draped her head with her black t-shirt with the words "Activist Athlete" printed on it.

Berry told US journalists that the anthem began playing later than planned, which she believes was done intentionally.

"I feel like it was a set-up, and they did it on purpose. I was pissed, to be honest", Berry complained. "They said they were going to play it before we walked out, then they played it when we were out there. But I don't really want to talk about the anthem because that's not important. The anthem doesn't speak for me. It never has".

She added that she intends to raise awareness about social injustice in the US at the Olympics.