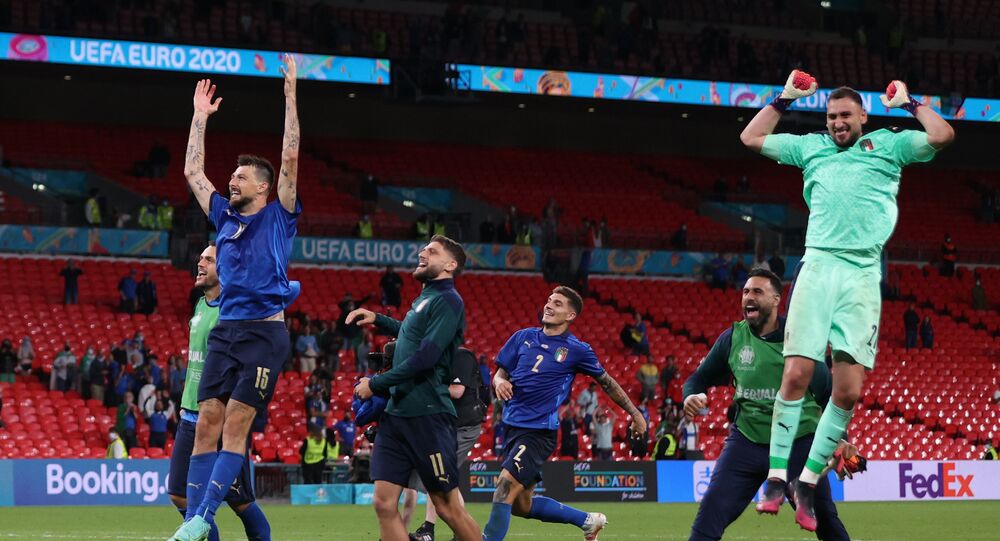 Italy's national team has extended their undefeated streak to 31 matches (26 wins, 5 draws), while Roberto Mancini's team has won their last 12 matches. The Italian national team has made it to the quarter-finals of the European Championship for the fourth time in a row.

The Italian national football team in extra time defeated the Austrian team in the 1/8 finals of the EURO 2020 Championship.

The match, which took place in London at Wembley Stadium earlier on Saturday, ended with a score of 2:1 in favor of the Italians, with goals scored by Federico Chiesa in the 95th minute and Matteo Pessina in the 105th.

Federico Chiesa scores for Italy against Austria. Here's the goal:

Italy are through to the quarter-finals of #EURO2020 after a hard-fought win over Austria at Wembley 🇮🇹 #ITA #AUT pic.twitter.com/lEr2rvBMOt

Sasha Kalajdzic scored the sole goal for the Austrians in the 114th minute.

The first goal Italy have conceded in 1,168 minutes 😱 pic.twitter.com/t14nN2rCkW

In the 65th minute, Marko Arnautovic sent the ball into the Italians' net, but the goal was disallowed after the referees reviewed it with the video assistance system due to Arnautovic being in an offside position. Arnautovic also received a yellow card 1 minute 32 seconds after the start of the first half, the fastest warning of the current championship.

The sports media noted that Chiesa scored a goal at the EURO 25 years and 12 days after his father Enrico Chiesa scored against the Czech team in the group stage of UEFA EURO 1996.

The rival of the Italian team in the quarter-finals of EURO 2020 will be determined by the results of the match between the national teams of Belgium and Portugal, which will be held in Seville on Sunday.

The quarterfinal game will take place in Munich on July 2.

In its history, the Italian team won the 1968 European Championship and took second place twice, in 2000 and 2012. The Austrian national team for the first time in its history overcame the group stage of the European championships this year.

This year, the UEFA European Football Championship, which was originally scheduled for last year but eventually postponed due to the COVID-19 pandemic, is being held across the continent for the first time in its 60-year history, with 11 host cities in all: London, St. Petersburg, Baku, Munich, Rome, Amsterdam, Bucharest, Budapest, Copenhagen, Glasgow and Seville.

The final is scheduled for July 11 at London’s Wembley Stadium.