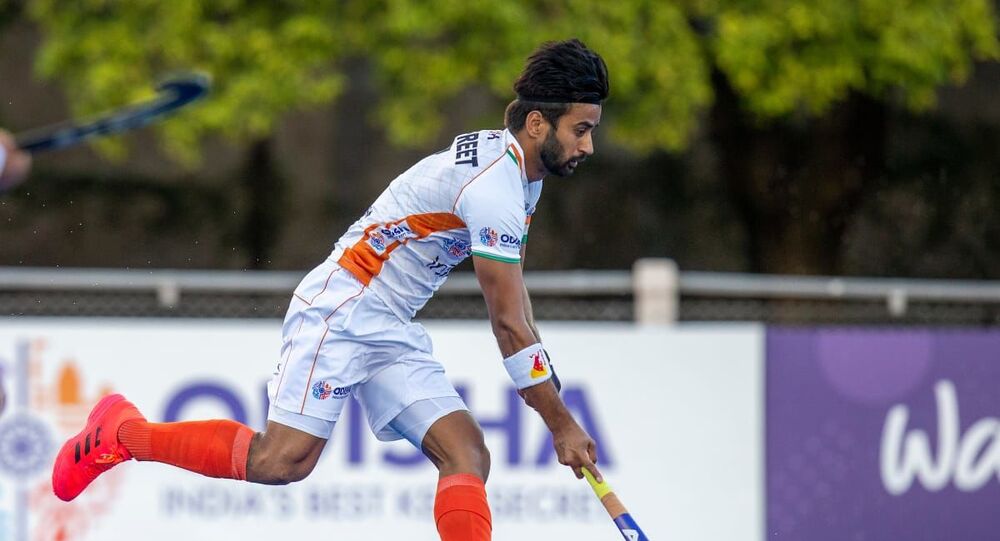 Widely regarded as one of the best midfielders in field hockey, Manpreet Singh has been the captain of the Indian team since 2017. He is also the first Indian to win the Federation of International Hockey (FIH) Player of the Year award in 2019.

Led by the charismatic Manpreet Singh, the Indian field hockey team is eyeing a podium finish at the upcoming Olympic Games in Tokyo.

Manpreet and his boys want to break their 41-year-old medal drought at the Olympics not just for themselves, but to give a befitting tribute to the country's frontline health workers.

In an interview with Sputnik on Friday, Manpreet spoke about his dream of clinching a medal at the Olympics, the team's preparations in Bengaluru city, his journey from player to captain, his biggest achievement and much more.

Sputnik: Considering India recently beat Olympic Champions Argentina, how confident are you about winning a medal in Tokyo?

Manpreet Singh: Not only Argentina, we also beat England, Australia and the Netherlands in the Pro League last year, which gave us a lot of confidence. Everybody on the team believes that we can beat any team in the world right now. But the Olympics are a different ball game altogether and it will not be easy because every team wants to give its best in Tokyo.

We should not underestimate any team in the tournament. We should focus on our own performance and should give our best every single day. We should know the weaknesses and strengths of our rivals so that we have a strategy in place to hurt them on the field. Our motto right now is to take one match at a time and try to win it before thinking about the next.

The Tokyo Games will be my third Olympics after London 2012 and Rio 2016. I hope we get a medal this time because it is the only dream which I am yet to fulfil. India hasn't won a medal in field hockey since 1980 and I would like to end that drought in Tokyo.

Sputnik: What areas have the Indian team worked on during the national camp in Bengaluru?

Manpreet Singh: The Indian team has exceptional drag-flickers in the form of Harmanpreet Singh and Rupinder Pal Singh. But we haven't been able to use them as we would have liked. During the camp, we worked on this weakness because we realised that we need to create more opportunities in the opposition's circle. For this to happen, whenever we enter the rival team's circle, we should get a penalty corner or a goal. This way we will be able to use our world-class drag-flickers really, really well.

Sputnik: Was not playing competitive field hockey for over a year a setback?

Manpreet Singh: We played some matches this year. In February, we went to Germany for a tour, where we played two matches with the Germans and three matches with England. So, I think that quite helped us in finding our groove because we were able to beat them.

Obviously, as an athlete, we want to play more matches, but with the COVID situation, we couldn't play enough matches.

Yes, playing fewer matches has been a kind of disappointment. Despite all the shortcomings, we moved forward and did our best in our preparatory camp in Bengaluru. We played a number of matches against each other, where our intensity level was really high, where we could see that we had improved a lot. Also, we have worked on match tactics and strategies because we want to carry all the good things from the tour of Germany and Argentina to the Olympics.

Sputnik: Was beating Pakistan in the Incheon Asian Games final in 2014 an unforgettable memory for you?

Manpreet Singh: Indeed, it is my career's biggest achievement so far. After all, we all dream of beating Pakistan in the final of a mega event, something which I achieved in Incheon. It was simply like a dream coming true because ever since I became a field hockey player, I wanted to win a gold medal for India in a big tournament like the Asian Games.

Sputnik: From playing in the junior team to becoming the Indian captain, what has your journey been like?

Manpreet Singh: From junior team to India captain - the journey has been simply fantastic. It was my dream to represent my nation in the Olympics, and I did achieve my dream when I represented India in the 2012 London Games. Although I have been India captain since 2017, this would be the first time I will be leading the team in the Olympics. I am hopeful we will return with a medal from Tokyo.

Sputnik: How did you keep yourself positive and motivated during the second wave of coronavirus in the country?

Manpreet Singh: The Indian team is my family. I have spent 11 years with this team and all of us have great memories of each other. We also know each other's secrets and it gives us great pleasure and happiness when we share things among ourselves.

We have been really inspired by our doctors and frontline health workers because the way they dealt with every situation during such trying times is simply commendable.

The whole Indian team, including me, wants to win an Olympic medal for our frontline health workers because it would be the ultimate tribute to their selfless service to the nation during this pandemic.