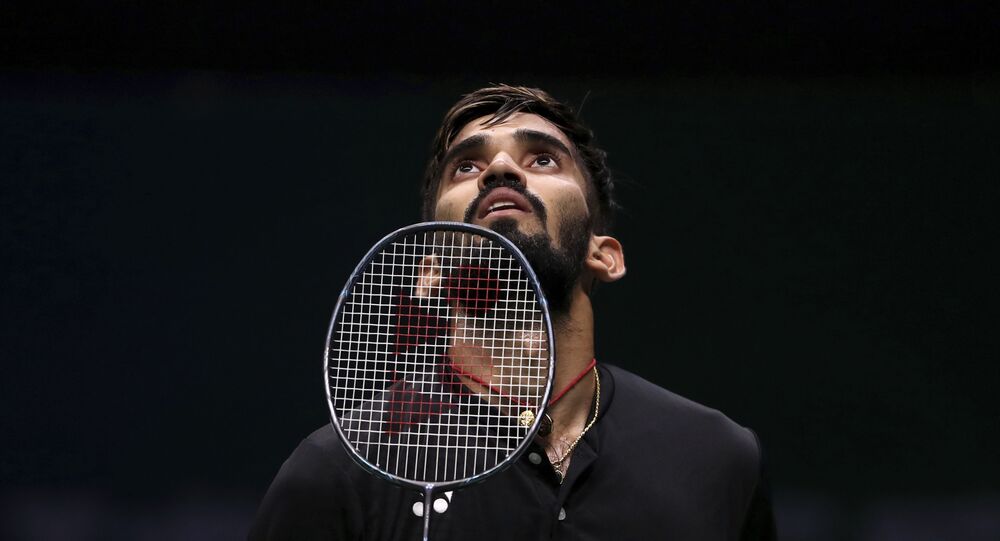 Former Top-Ranked Badminton Player Srikanth Kidambi: 'I Was Confident of Winning a Medal in Tokyo'

A year before topping the world rankings, Srikanth became just the fourth player to win four Super Series titles in a year. He joined the likes of Malaysia's Lee Chong Wei, Chinese superstar Lin Dan and Olympic gold medallist Chen Long in an exclusive list. He was ranked World No 1 in badminton in 2018.

Indian badminton player Srikanth Kidambi is the sport's second big name - after Saina Nehwal, who won bronze in the 2012 London Olympic and has been ranked women's No 1 - to have failed to qualify for the Tokyo Olympics. He is at present No 14 in the official Badminton World Federation (BWF) rankings.

The 2018 Commonwealth Games gold medallist, who reached the quarter-finals at the Rio Games, would have been one of the major medal contenders for India if he had qualified for the Olympics.

Ever since he failed to make it, however, life hasn't been the same for India's biggest superstar in men's badminton.

In an interview with Sputnik on Tuesday, Srikanth spoke about his disappointment on missing out on the Olympics, Badminton World Federation's role in his failure to qualify, fellow Indian player PV Sindhu's chances of winning gold in Tokyo, national coach Pullela Gopichand's role in his career and why he likes former Indian cricketer Mahendra Singh Dhoni.

Sputnik: You missed the chance of qualifying for the Tokyo Olympics. It must have come as a huge disappointment.

If I get to play and I don't perform, I can take the blame, I can analyse what worked, what didn't work. But when there are not enough tournaments to qualify, there's nothing I can do.

Sputnik: Do you think your chance of qualifying for the Olympics were hurt by the BWF cancelling tournaments and then not announcing any back-up events?

Kidambi Srikanth: Yes, I definitely feel that if the BWF had announced back-up tournaments for players, I would have made it through to the Olympics. I needed to secure about 5,000 points in five or six tournaments, out of which one was scheduled to be held in India.

Around February, I was pretty confident that I would be part of the Indian badminton team for the Olympics. But as the tournaments got cancelled I failed to make the cut.

Sputnik: You reached the quarter-finals of the Rio Olympics in 2016. What did playing in an Olympics mean to you?

Kidambi Srikanth: It was my dream to represent India at the Olympics and, by being a part of India's team in Rio, I realised that dream. But I had another dream of winning a medal at the Olympics, which I thought would happen in Tokyo. And that's the reason I would have loved to be part of the Tokyo Games.

Because I was playing really well, I was confident of winning a medal. Also, I am much more experienced now than I was in 2016.

Sputnik: You were ranked No 1 in the world in 2018. Tell us how it felt being the best in the world.

Kidambi Srikanth: It was a very special feeling because I always dreamt of being World No 1. When I reached that I was in Australia for the Commonwealth Games (CWG). And, that's the reason I didn't get to enjoy a lot of it, but I was really happy.

A day before I became World No 1, the Indian team won gold in the mixed team event for the first time, beating one of the top sides Malaysia in the final.

The Commonwealth Games were a special tournament for me and I will never forget those two weeks I spent in Australia for the rest of my life.

Sputnik: What do you think of Pullela Gopichand being India's head coach?

Kidambi Srikanth: Gopi Sir is one of the best coaches I have trained under. He was the one who made me play singles because he realised that I had potential to succeed there after he followed my doubles progress closely.

He has been supporting me from Day 1 up until now, so I am really happy that he is my coach. He has always been there for me, whenever I have felt low or have needed an advice, he has always helped me.

Sputnik: Do you think star player PV Sindhu will improve on her own record and claim gold in Tokyo?

Kidambi Srikanth: She won a silver medal last time. Sindhu definitely has the experience and has also done exceptionally well in the past four years. So, I think she has a very good chance of winning gold at the Olympics. But whether she will succeed in winning gold also depends on how well she plays during the tournament.

Sputnik: Is there any other sports star - apart from in badminton - whom you greatly admire?

Kidambi Srikanth: Mahendra Singh Dhoni is my favourite sports star. I simply love his calm and his ability to absorb all the pressure that is coming his way.

Dhoni can read situations really well: he knows exactly what to do, he is very cool and never worries about what has happened in the past or what will happen in the future. Also, like me, he focuses on the process more than the result.