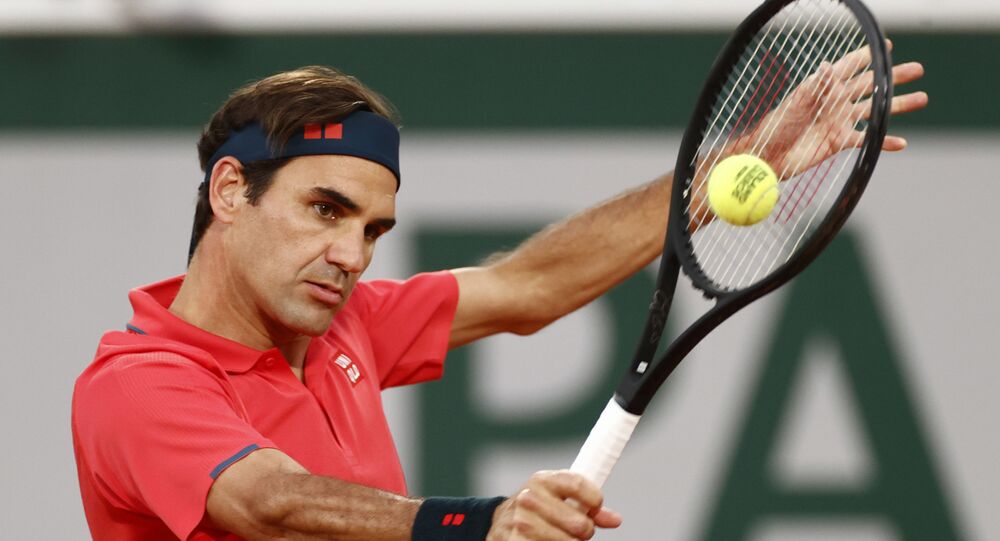 Swiss legend Roger Federer has won a record 20 Grand Slam titles, while he was previously ranked no. 1 for a record 237 consecutive weeks.

Twenty-time Grand Slam champion Roger Federer failed to reach the Halle Open quarterfinals on Wednesday, as 20-year-old Canadian Felix Auger-Aliassime came back from a set down to stun the Swiss, who was beaten 4-6, 6-3, 6-2.

© REUTERS / BENOIT TESSIER
As Novak Djokovic Wins 19th Grand Slam, What Are the 19 Reasons That Make Him the Greatest?
Since his comeback from injury in March, the 39-year-old has failed to reach the quarterfinals of any of the four tournaments he's participated in.

Federer made his long awaited return to action in March at the Qatar Open in Doha after being sidelined for more than a year with a knee injury that required two surgeries. He was knocked out by Nikoloz Basilashvili of Georgia in the quarterfinals in his comeback.

The former world no. 1 then faced another shock defeat at the hands of Pablo Andujar of Spain during the first round of the Geneva Open.

After his loss in Geneva, Federer decided to play in the French Open, much to the surprise of his fans and pundits alike because he's barely featured in the tournament in the past five years. Even though Federer won his first three matches, he decided to pull out from the tournament because he wanted to protect his knee from the rigours of the red clay ahead of his beloved Wimbledon.

© AFP 2021 / MARTIN BUREAU
Roger Federer Withdraws From French Open Tennis Tournament
He made the decision after spending three hours and 35 minutes on court during his win against Dominik Koepfer of Germany in the third round. The match really took a toll on his body.

"After two knee surgeries and over a year of rehabilitation, it's important that I listen to my body and make sure I don't push myself too quickly on my road to recovery," the Swiss said.

"I am thrilled to have gotten three matches under my belt. There is no greater feeling than being back on court," he added.

After exiting the French Open, Federer arrived in Halle, a Wimbledon warm-up tournament where he's won 10 titles. However, this time out he only managed to reach the second round.

Former tennis player Vishal Uppal, who represented India in the Davis Cup, told Sputnik on Thursday it will take Federer some time to sharpen his game. "It's never easy to come back after an injury and not play competitively for such a long period of time. His aim will be to get his game ready for Wimbledon."

"Federer's chances of winning a Grand Slam have reduced a fair amount. But with a great champion like him, you can never count him out at Wimbledon or the US Open. This is perhaps the last year for him to add to his Grand Slam kitty," he observed.

Over the years Federer has defied the odds many times in his career.

In 2013, when almost everyone had written him off, he reinvigorated himself by changing the frame of his racquet from 90 to 97 cm. The Basel native also improved his backhand.

The last time Federer made a return from a lengthy layoff in 2017, he immediately won the Australian Open in dramatic fashion against his arch-rival Rafa Nadal.

The then 35-year-old eventually became the oldest world no. 1 in men's tennis before making history at Wimbledon, winning his eighth title to break Pete Sampras' long standing record of seven trophies at SW19.

What are Federer's chances of winning on the grass in London this year? It remains to be seen, but one thing the world has learned throughout his career is never to write him off.