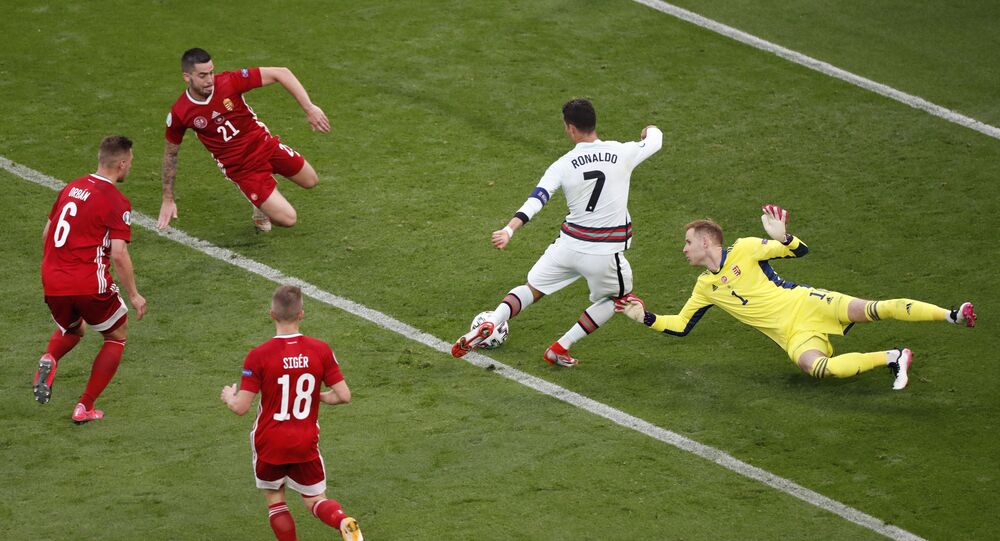 Widely considered as one of the greatest players of all time and arguably the best player in the world at the moment, Portugal skipper Cristiano Ronaldo is breaking football records for fun. He is the only European player ever to score more than 100 international goals and win five Ballon d'Or awards.

Cristiano Ronaldo became the all-time record goal scorer at the European Championships after scoring a brace in Portugal's emphatic 3-0 win over Hungary on Tuesday.

The Portuguese skipper beat the record set by French great Michel Platini, who scored a total of nine goals at the Euros.

Ronaldo scored a penalty before netting another goal against Hungary last night. With his appearance against the Hungarians, Ronaldo also became the first player ever to feature at five Euros.

CR7, as Ronaldo is nicknamed, has been part of every European Championship since 2004, when Portugal hosted the event and were the eventual finalists where they lost to Greece in what was a shock result.

Ronaldo has featured in five Euros so far, and has scored goals in each of the five Euro championships, becoming the first man to achieve the feat.

Aged 36 years and 130 days, he became the oldest Portuguese player to score a goal in a major football tournament, beating Pepe's previous record (35 years, 124 days), which he had set in the 2018 FIFA World Cup.

The former Real Madrid forward is the oldest to score at least two goals in a Euro game, surpassing former Ukraine skipper Andriy Shevchenko, who was 35 years and 256 days old when he scored a brace in his country's 2-1 win over Sweden at Euro 2012.

What Are Other Records Ronaldo Can Break During Euro 2020

With his twin goals against Hungary, Ronaldo has now scored 106 goals in his international football career. He is only three shy of Ali Daei of Iran's all-time record of 109 goals.

If the Portuguese side makes it through to the finals of the tournament, there's every chance that Ronaldo will succeed in breaking Daei's long-standing record.

"Ronaldo is perhaps playing his last Euro and he will be really, really motivated to break Ali Daei's record of most international goals in this tournament. Ronaldo's focus will not just be on the record, but he will be eager to win the trophy for Portugal," he said.

"Ronaldo loves to respond to his critics with his performances on the field, and that's why he will not be satisfied with anything less than the trophy at the Euros," Suresh added.

With eight assists, the Czech Republic's Karel Poborsky holds the record for the most assists at the Euros.

However, Ronaldo is close behind with six assists and it is quite possible for him to break or equal this record as well during the course of the ongoing Euro 2020.

The Hungary match was Ronaldo's 176th game for Portugal and he is currently the second most capped European in the world.

With 180 caps, Sergio Ramos of Spain holds the all-time record. But if Portugal does manage to reach the semis of Euro 2020, Ronaldo will move ahead of Ramos with 181 appearances for his country.

Ronaldo is the first and the only player to score nine hat-tricks in international football. His last hat-trick came in 2019, when Portugal defeated Lithuania 6-0 in a Euro 2020 qualifier.

Besides his goals in the Euros and the World Cup, Ronaldo has also scored goals in the 2017 Confederations Cup and the Nations League in 2020.