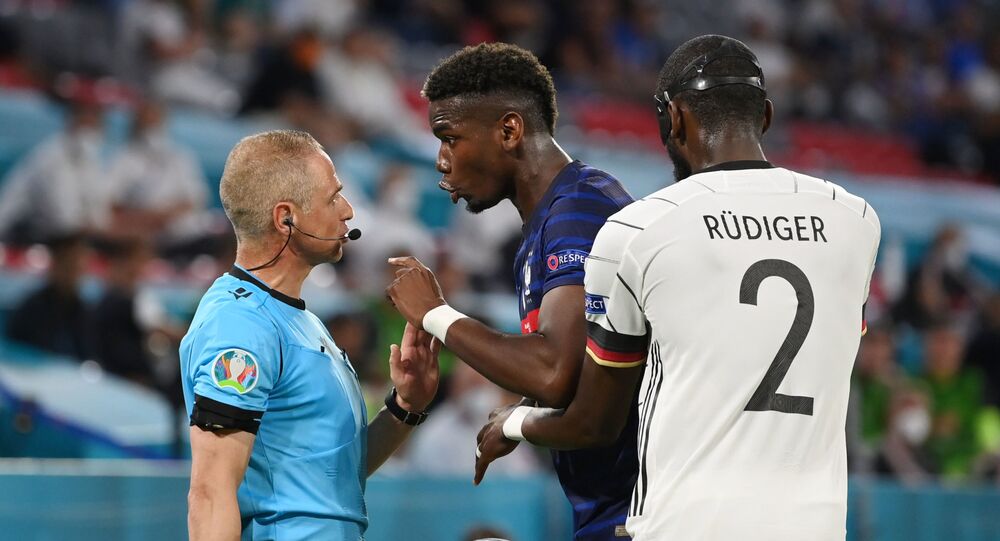 Following an incident between the two players, Paul Pogda said that Antonio Rudiger "nibbled, I think, a little bit" on him.

UEFA has made a decision to not authorise disciplinary action against Rudiger during the first half of the Germany-France match in Munich on Tuesday. Rudiger appeared to have bitten the back of Manchester United midfielder Pogba, who reacted with a scream.

As the incident went unnoticed by the officials of the game, Pogba asked them to take a closer look but nothing came of his pleading.

​The UEFA have now confirmed they won’t be opening a case over the incident, which means Germany player Rudiger will be able to play in the game against Portugal.

After the match, Pogba said he didn't want Rudiger suspended as a result of the incident.

"I’m not crying for cards, yellow, red cards, because of such actions. He nibbled, I think, a little bit on me. But we have known each other for a long time. I told the referee and he takes decisions and he took a decision. It’s over. It was a great match for us, and I didn’t want him to be suspended because of such a situation," Pogba said.

Rudiger said that the pair talked about it "as friends after the final whistle" and admitted that he shouldn't "come close with my mouth to his back."

🧛‍♂️ Pogba's performance last night was so tasty, Rudiger just had to get a bite... #EURO2020 #FRA #GER pic.twitter.com/niiFIIroOz

One of the most famouse biting incidents in the recent history of international football tournaments saw Uruguay player Luis Suarez bite Italy's Giorgio Chiellini during a 2014 World Cup match. Suarez was banned for nine games and sent home from the tournament.