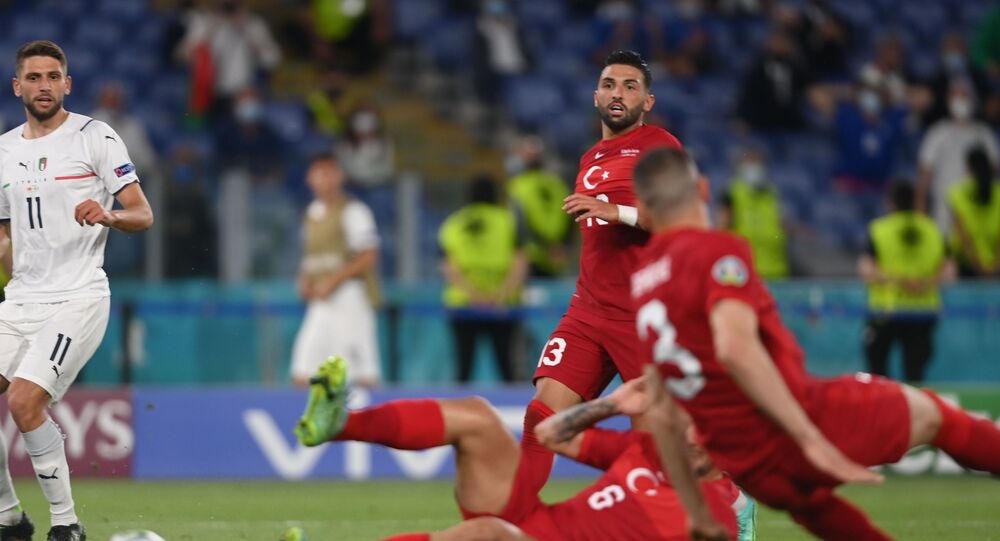 The game between Turkey and Italy in Rome is the first match of the UEFA European Football Championship 2020, often known as Euro 2020, which kicked off on Friday. The championship was supposed to take place in June and July 2020, however, due to the coronavirus epidemic, it had to be postponed for a year.

The first goal of the EURO 2020 was scored by Turkish national football player Merih Demiral, who hit the ball into his own net in the opening match of the tournament against the Italian team.

The 23-year-old Demiral was charged with the own goal in the 53rd minute of the game.

1-0 after Merih Demiral scored an own goal pic.twitter.com/dhGpdPOLEo

✅ The 1st time an own goal has been the opening goal of a European Championships.

The first half ended in a draw with the few chances testing Turkish goalkeeper Ugurcan Cakir.

But it seemed like Demiral's mistake brought bad luck to his entire team, as the score continued to rise in favor of the home side.

The Italians' advantage in the 66th minute was doubled by striker Ciro Immobile, who scored the second goal against the Turks.

The third goal of the Italian national team in the 79th minute was scored by Lorenzo Insigne. The Azzurri took advantage of their opponent's mistake on defense and brought Insigne to a shock position - Lorenzo perfectly capitalized on his chance.

The match ended with the Italians beating the Turks with a score of 3:0.

According to sports media, Demiral's score is the first time in the history of the EURO championship that the opening goal was an own goal.

The match also became Italy’s highest-scoring game in the modern era of the Euros. The Azzuri are otherwise renowned for playing defensive, physical and low-scoring games.