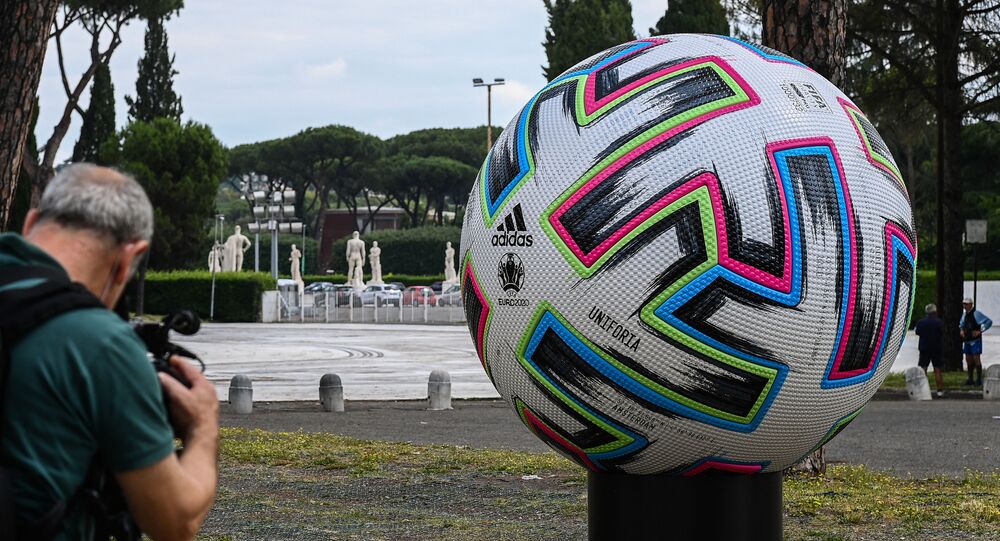 The 2020 UEFA European Football Championship, commonly known as Euro 2020 is scheduled to be held in 11 cities of 11 countries in Europe from 11 June to 11 July 2021. The tournament was earlier scheduled to be held from 12 June to 12 July 2020 but it had to be postponed for a year due to the Coronavirus pandemic.

World Champions France and top-ranked Belgium are the favourites to win the upcoming Euro 2020 tournament, which is set to begin with a match between Italy and Turkey on 11 June.

According to the experts, including Indian legend Bhaichung Bhutia, England skipper Harry Kane is all set to become the tournament's top-scorer ahead of Portuguese superstar Cristiano Ronaldo.

If France is victorious at London's Wembley Stadium, where the final of the tournament will be played on 11 July, they'll have won both the FIFA World Cup and the UEFA Euro for the first time since 2000.

© Sputnik / Alexey Filippov
Sergio Ramos Left Out of Spain's Euro 2020 Squad
The French national football team, popularly known as Les Bleus, won the European Championship in 1984 and 2000. They were the runners-up to Portugal in 2016. With three trophies each, Germany and Spain have won the most championships, and if France wins this year, it will equal their record.

France is the reigning World Champion after winning the FIFA World Cup in 2018, defeating Croatia 4-2 in a one-sided final in Moscow. France was so dominant that it was undefeated in the entire tournament, winning six matches and ending one in a draw before clinching a second World Cup title in 20 years.

They had won their first FIFA World Cup in 1998 when the legendary Zinedine Zidane scored a brace to lead the team to a historic 3-0 triumph over Brazil at home.

Former India captain Bhaichung Bhutia believes France will win the tournament. Bhutia, who will be a part of Sony Network's commentary team, believes that France has the team and the form to go the distance in the competition.

Speaking to Sputnik on Tuesday, he said, "France will be the overwhelming favourite to win the Euro 2020 followed by Belgium because both the teams have been performing really, really well of late. Especially, France has the likes of Kylian Mbappe, Karim Benzema, N'golo Kante and Paul Pogba, who can literally dismantle any side in the world if they play to their potential."

During the qualifying rounds, Belgium was indeed the team to beat as they won all 10 matches, scored a staggering 40 goals and conceded only three goals during those matches.

With Eden Hazard, Kevin De Bruyne and Romelu Lukaku on the team at the moment, Belgium seems to have their best chance to win the Euro title this year.

Former India international Syed Rahim Nabi, who will act as one of the experts (commentator) for the tournament on the same television network, agreed with Bhutia's assessment that France and Belgium would be the teams to watch out for.

But Nabi acknowledges that the defending champions Portugal cannot be taken out of the equation because it is possibly Ronaldo's last European Championship and he would like to put up a stellar show in the competition.

"There's no doubt that France and Belgium are the frontrunners to win the Euro 2020 as they have been the most consistent teams for the past few years. But Portugal being the defending champions will give them a tough challenge,” Nabi told Sputnik on Tuesday.

“Ronaldo, who was the inspiration behind their victory in 2016, can once again lead them to the title as he knows his time to win a major tournament is ticking really fast," Nabi added.

© AFP 2021 / JONATHAN NACKSTRAND
Knee Injury Forces Zlatan Ibrahimovic Out of Euro 2020
He said, "Belgium has got a very strong side and certainly, they can end their major trophy drought in the upcoming European Championships."

After making their picks to win the tournament, Bhutia, Nabi and Suresh also chose their favourite players, who could win the golden boot in the championships.

While Bhutia and Suresh named English forward Kane to become the top-scorer ahead of Ronaldo, Mbappe, Benzema and Lukaku, Nabi tipped Ronaldo to emerge as the top-scorer.

Bhutia added, "I think Harry Kane will be the front-runner to claim the Golden Boot, followed by Mbappe and Ronaldo."

On the other hand, Nabi said, "For me Ronaldo is the best player in the world right now and I simply can't think about a better name than him. Plus, this would be his last Euro, which I think would motivate him to put his best foot forward in the tournament."

Apart from France, Belgium, and Portugal, Kane's England would be the other team to watch out for, especially after their fourth-place finish at the World Cup in Russia in 2018.

Managed by Gareth Southgate, England was the second best team after Belgium in the qualifiers as they won seven of their eight matches before sealing their spot in the event.

Golden Boot for Sale: Who Will Win the Race to Sign England Striker Harry Kane for £150 Mln?