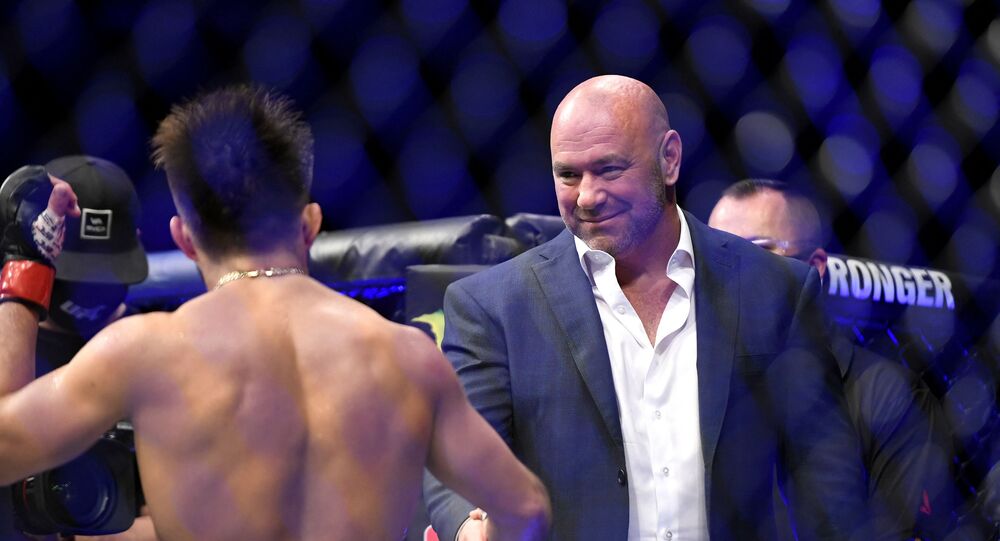 White, a 51-year-old American businessman, has been the president of the Ultimate Fighting Championship (UFC), the largest mixed martial arts organisation in the world, since 2001.

Trainer Joshua Fabia, who is the leader of the School of Self-Awareness organisation, has accused the UFC president, Dana White, and promotional matchmaker, Sean Shelby, of sleeping with female fighters under the organisation's banner.

Fabia also said that he had some video evidence to back up his words and added that he will have to publish them if the issue is not being addressed.

White and Shelby have not yet commented on the allegations.

Fabia, known for his criticism of the UFC promotion, recently requested from the company the entire medical history of veteran fighter Diego Sanchez, whom he's training and managing, prior to a scheduled retirement fight against Donald Cerrone this weekend, as reported by Lowkickmma.com. This resulted in a phone call with UFC Chief Business Officer and lawyer Hunter Campbell that was published on Sanchez’s official Instagram account.

During the conversation, Campbell said that if information about Sanchez's short-term or long-term health reveals that the fighter does not feel "100%", he would be pulled from the card and released from the promotion.

Shortly after, the UFC management released him from the fight before any clarification about his health was received.

On 5 May, Sanchez said that he had repeatedly asked White to meet him, but to no avail.

"What’s up, Dana? Man, I tried for two years to get a meeting with you. Oh, sh*t. I was the first Ultimate Fighter. Didn’t that show do something for the company when it was $60 million in debt? Oh, oh, all that fight of the nights. All that TV time, Spike TV, Fox TV, ESPN, all of ’em. And you can’t meet with your boy?" Sanchez asked during an interview on Sirius XM’s MMA Today with RJ Clifford and Anthony Smith.

Sanchez also said that he fears for his life because he believes that the UFC would retaliate after he exposed the "truth" about the company.

According to Lowkickmma.com, White reacted to Sanchez's release from the UFC following a 16-year stay by saying that he is concerned about the fighter's wellbeing because Fabia has taken control of his life.

"I have an incredible, amazing relationship with Diego (Sanchez) and I like him very much and I hope he is OK...One of the sad things that happens, not just in fighting but in sports, and I want you to quote me on this, are these creepy weirdos who come from God knows where and leech onto fighters or athletes. They never do any good for them“, White said, apparently referring to Fabia.

White has been heading the UFC since 2001.